"I've Got The Strangest Feeling I'm Being Turned Into A Packet Of Artificially Flavored Drink Mix!"

Have I ever mentioned the time back in '74 when I was in the Central City Safeway and my shopping cart accidentally bumped into Abra Kadabra's? 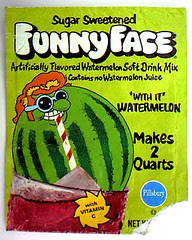 Why he couldn't have made my flavor "Blockade Boysenberry" is just beyond me.

(And be sure to visit the Imaginary World for more groovy drink packets!)
Posted by Jeremy Rizza at 5:21 PM No comments:

What's his deal:
Jim Randall was a skinny bespectacled scarecrow of a man who experienced a complete psychotic break with reality... er, make that "a celestial visitation from the Greek god, Atlas." Naked save for a blue cape, his mythical nether regions tastefully tucked into a billowing cloud, Atlas bestowed upon Jim not wisdom or invulnerability or even a lousy magic trinket, but instead gave him an exercise routine. Jim spent weeks working out in secret, building himself into a brawny he-man. Atlas appeared to him again and ordered him to don a superhero costume and battle gangsters. Jim took his superhero name from the inspiring hallucination and set out to vanquish evil in a ridiculous get-up that seemingly appeared from nowhere, i.e. Jim was in a fugue state when he sewed the damn thing. First appearance (and last appearance, because he sucked): Choice Comics #1 (Great Publications). Reprinted for no good reason in Daring Adventures #18.

Our meeting:
As you may have gathered from my other posts, I have a powerful curiosity, and I don't let piddling things like locks or restraining orders or a sense of propriety get in my way. So, I was visiting a bustling (yet oddly nameless) metropolis in late 1941, and I chanced upon the most beautiful little park. (Had to burrow under a rather high, barbed-wire-topped fence to get there, but oh well.) Anyway, I'm not there five minutes when I realize that most of the other visitors apparently have a real yen for shapeless white gowns. Even the men! I tried to chat up one lady about them, but she shushed me with the excuse that salamanders from Neptune had placed a listening device in her cervix. Then, a woman in a nurse's uniform (that wasn't doing her any favors, if you ask me) tapped me on the shoulder and said, "You must be Doctor MacTavish. Welcome to the Hillside Sanitarium for the Criminally Deranged!"

I figured that I had a little time before the actual Doctor MacTavish showed up so what the heck? I thoughtfully stroked my sweet-ass goatee and muttonchops and ordered the nurse to take me to my first patient... who turned out to be Atlas! It seems that not long after he started adventuring, he heard that the cops were looking for a maniac who had broken into the local zoo. This person throttled a leopard to death with his bare hands and partially skinned it. Atlas went straight to the police commissioner and announced that he was on the case. The commissioner took one look at Atlas' costume and bang! Hillside Sanitarium.

I had an orderly retrieve Atlas' outfit from storage so I could take a gander at it. My prescription? Art therapy!

My presentation:
"Jim, there's nothing wrong wi-- beg pardon? Oh. Sure, why not? 'Atlas,' there's nothing wrong with wanting to be a superhero. But I couldn't possibly sign your release papers if you're just going to wear that again! I've got a couple of ideas here that I think you'll like. No, give me that. Give me--! Orderly? Kindly restrain the subject so I can get my pastels back. Thank you. Well, yes, Atlas, I said we'd be doing art therapy but I'll be the one doing the art. Stop sulking. Or I'll smack you. There, better. Alright, first order of business: you have a secret identity, but no mask. That's just crazy! Um, no offense. So here's your first option.

"It's your standard superhero outfit with a nice Flash-Gordon-style cowl that reveals your gorgeous head of hair. The belt's nice and big, like a wrestler's belt or a laborer's truss, and it has the added advantage of hiding unwanted belly flab that you may develop as you grow older. I replaced your old symbol with this combination of lightning bolts and laurel leaves and see? It makes the shape of an 'A'! I wanted to emulate the feel of a classic superhero costume, in case you don't want to stick out from the crowd too much. But... what if you do want to be an iconoclast? I'm right there with you, buddy, but there's a wrong way and a right way. That pile or rags over in the corner is the wrong way. This is the right way.

"Here's my idea: we go all-out Greek. With armor and everything. Most of the outfit is based on the armor of an ancient Greek hoplite but we jazz it up with a muted version of the color scheme from your original costume. You can get some auto body places to do some amazing things with metal coatings, I might add. Yeah, you're diggin' it, right? I thought you'd like this version because it keeps the leopard skin but now it's in loincloth form, like from an ancient Greek theatrical 'rustic' costume. And we'll put a metal codpiece underneath in case some wiseapple tries to kick you in the 'little Atlas.' Instead of a mask to hide your identity we have a helmet. I've also thought about how you could look when the helmet's off, like when you've just beaten a bunch of hoods into a bloody pulp and you steal away into the night with that freshly rescued 'special someone.' The laurel crown is painted metal so you can whip it out at a moment's notice and not worry about it wilting. What are you giggling about? And now, about your hair. I know that you can't get away with wearing it too long in this antiquated, backwards era -- um, I mean, nowadays. So this is basically Johnny Weissmuller length: longer than normal but not outrageously long. Can't you just imagine how you'd look all dolled up like this, posing on a gargoyle or crouched atop a streetcar or a lamppost or something? You'd be stunning, am I right? Of course I'm right! So, tell me what you think!"

Jim's response:
He said he liked the second option but he wanted to consult with his "patron god" on the matter. Then he went into an epileptic seizure. And then the real Doctor MacTavish walked in. I made a break for it. I had to bloody the noses of a few orderlies (and one of the beefier nurses) but I managed to lose them and slip back under the fence. Atlas was never heard from again.
Posted by Jeremy Rizza at 11:56 AM 3 comments: