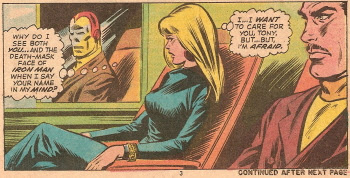 You know what else Iron Man should wear? A hat. Since he's doing the turtleneck thing (a.k.a. Marianne) I'd give him an arty beret.. or if it was the 1990's, even an irreverent tuke, maybe with a patch on it, like Captain America's head with a big red "X" over it. I actually have a bunch of those on hand, and I made them all myself! Not that I'm one to bear a grudge, mind you. Anyway, that's what Iron Man could wear on a date. For a business meeting or a DUI hearing, I'd recommend a three-piece suit with a nice fedora or a homburg. For company picnics? A peppermint-striped jacket with a straw boater. For leisurely yachting across New Haven Bay, an18th century British admiral's costume (with epaulettes and everything!) and a Cap'n Crunch hat, rakishly cocked. And for a European beach, speedos and a dab of zinc oxide where his nose is supposed to be.
Posted by Jeremy Rizza at 6:15 AM 7 comments:

Thank You for Flying Air Noir 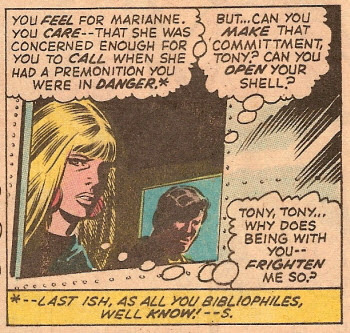 Miss? ...Missus? Hello? Hello? *heh-hem* HEY, DUMB-ASS! ...Dang, she is really out of it. I was gonna point out that the plane has apparently lost all electrical power and will most likely plummet to its doom but oh well.

And Tony is too busy marveling over how the impromptu chiaroscuro lighting makes his handsome face look all mysterious and wise and shit. "I should ditch the fluorescents and just put in some of those brazier thingies like Steve Strange has in his pad," he thinks. "Then maybe I could get me some of that extra-dimensional tail!" (Seconds later, the cabin is engulfed in flames.)
Posted by Jeremy Rizza at 5:57 AM 4 comments: 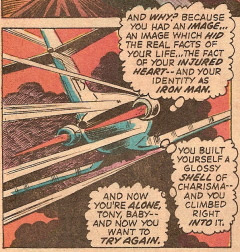 *crackle* This is your captain speaking... an overabundance of melodramatic thought balloons is increasing the plane's aerodynamic drag, so our arrival time will be pushed back about half an hour... if you have a problem with that, you may want to take it up with the self-pitying billionaire in seat 1-B... also, I'm afraid we have no more of those teeny liquor bottles, because the billionaire drank them all... the stewardesses will be coming around with small pillows that can be used to throw at or forcibly smother the billionaire... that is all... *crackle*
Posted by Jeremy Rizza at 6:40 AM 9 comments:

Earth vs. the Flying Boozehound 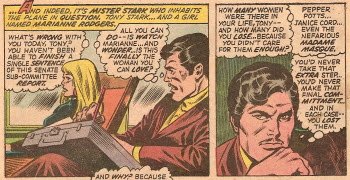 Before the advent of notebook computers, air travelers had to use briefcases to cover up their socially-inappropriate boners!

So, assuming he's not waggling that red pen as a symbol of his constrained dingus (a true martyr for our time!) what is he's doodling? Is he...
I'm stumped! What do you guys think he's scribbling?
Posted by Jeremy Rizza at 5:55 AM 7 comments:

So Do All the Hookers Have to Sleep in the Barn, or What? 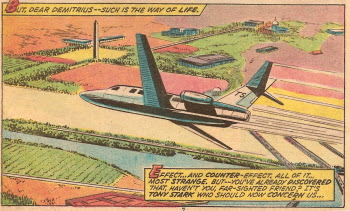 Contrary to popular belief, Washington, D.C. actually consists of a handful of monuments scattered about a wheat field.
Posted by Jeremy Rizza at 6:08 AM 6 comments: 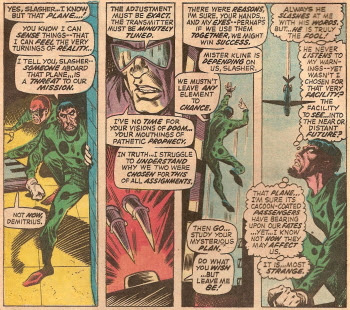 I would have broken this down into smaller panels but as you can see, the ConwaySpeak tends to overlap itself. Except for in that first panel, which must be feeling awfully lonely right now. C'mon, First Panel Demitrius! Come out from around that corner. You could be smothered in word balloons right now! (It's fun!)

I love how Slasher's blocking makes it look like he's standing up and playing an electric organ.

(And speaking of my robotic dingus, I'm reminded that it's about time for its next scheduled maintenance. Three months or three thousand bouts of torrid lovemaking with Weight Wizard, whichever comes first! Tusker, put the pita pocket down, grab a drain pan and a big can of oil, and slide yourself underneath me.)
Posted by Jeremy Rizza at 5:49 AM 4 comments:

Because You Politely Requested It

It's my 2nd Bloggiversary today! (See?) That means posting will be light while I'm feted by my entire crew... under my strict supervision, natch. (Tusker, that ice cream cake you made in my likeness is sub-par. Start over!) Anyway, this is all I have for you today. 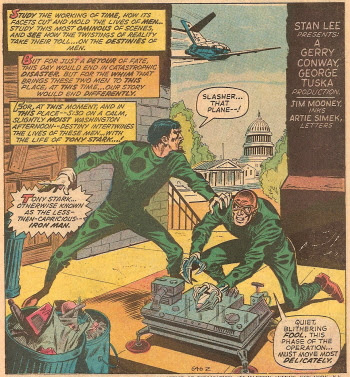 Well, I certainly can't find fault with Slasher's headgear, now can I?

But those jumpsuits--! Black polka dots on army green? Are they an elite unit of party clowns? Did they just come back from the paintball range and they didn't have time to change? Are those just oddly-placed sweat stains? And don't try to tell me it's "camouflage" unless they're going to infiltrate a Baskin-Robbins and skillfully blend in with the mint-chocolate chip.

(Also, I can't figure out why Slasher's hotplate has a detonator.)
Posted by Jeremy Rizza at 7:05 AM 11 comments:

Pinch Me; I Must Be Dreaming 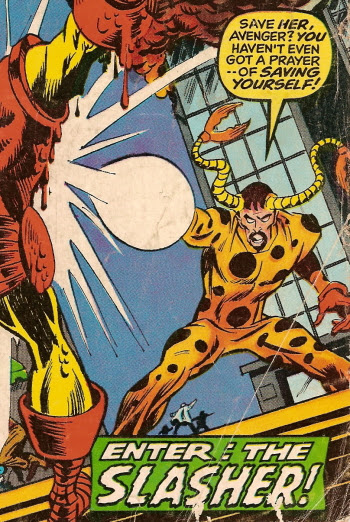 You know how I'd take care of this joker? Drawn butter, and puh-lenty of it!

Wow! Just what in th' Sam Scratch is going on here?! Was Grant Morrison interning at Marvel in 1971? Did Stan Lee's gofer slip a little something extra into his coffee? (And I don't mean "Sweet 'n' Low.") Am I imagining the whole thing, and everybody else looking at this freak is seeing the Melter or some shit?

The cover is a bit misleading, as the fellow with the crab-claw cranium is not named the Slasher and his groovy orange costume is actually a demure olive green. Which I think is George Tuska's and Jim Mooney's woefully misinformed notion of camouflage.

Welcome to the crazy mixed-up world of "Iron Man" #41 (September 1971), without a doubt one of the worst comic books I've ever encountered in my entire life. And I say this as someone who's read "Oblivion." It's written by Gerry Conway at his most hysterically overwrought. And like a lot of Conway's books, most of the characters can be divided into two categories:
1. Snide, hateful jerk-offs who talk way too much
2. Whiny, self-pitying douchebags who talk way too much

Believe it or not, there are a few nice silent panels. Sadly, they merely serve as literary "palette cleansers" -- preventing your brain from becoming numb to young Conway's hackery before assaulting it afresh. Probably 95% of the panels are so stuffed with purple prose that the characters are reduced to the size of ants. In fact this comic is so bad I'm tempted to go all "Gravity Girl" on its ass and blog it in excruciating detail. I mean, get a load of this caption box from the very first page:

Hey, don't judge them too harshly -- as you can see, hubby's completely smooth from the neck area on down. If that's what it takes for them to achieve intimacy, so be it. (And don't even think of asking about all the mustard bottles on her vanity.)
Posted by Jeremy Rizza at 6:28 PM No comments:

Oh yeah. That's a totally fake pelt he's sporting. He tells everybody he skinned it off a "liobear" but I know for a scientific fact those things ain't magenta and their fur is impervious to dye. My guess: "the Mighty Samson" salvaged his "skins" from the floors, walls and ceiling of an old van. (It wasn't a-rockin', so "the Mighty Samson" came a-knockin'.)

Show us around your pad, "the Mighty Samson!" 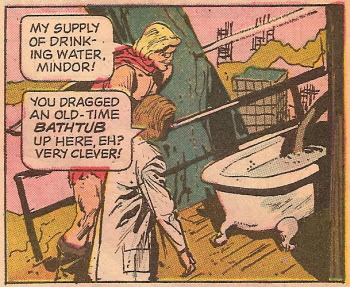 And it doubles as a toilet!

Say--! What's that on the wall? How quaint, a flat-screen plasma TV! What're you watchin'? The History Channel or some-- oh. 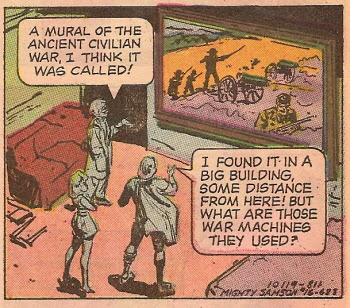 Dang, we are a "modern stone-age fam-i-ly", aren't we? Boring! Please, tell me you at least hiding a jewelry safe or a peephole into your bath area or a cage containing the trussed and gagged body of the real "the Mighty Samson" behind that thing.

Hang on, the Mad Thinker's even lamer cousin wants to show off. Preach it, Poindexter! 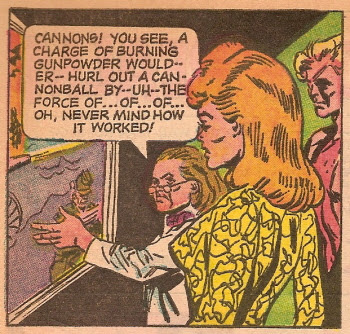 Christ. He says the word "cannons" and his eyes automatically land on her chest. Which wouldn't be half as creepy if he wasn't her father.

And honey? Could you stop thrusting? Seriously. Just turn that shit off for half-a-minute. And the next time you buy a sweater, consider going a size up. Also, we need to sit down sometime and have a nice long talk about the way you've been eating popsicles and corndogs. 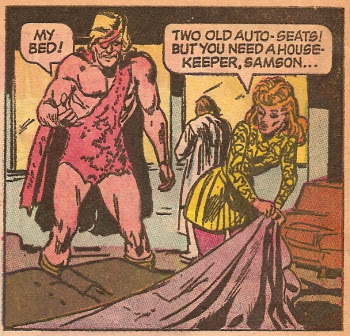 TURN IT OFF, I said!