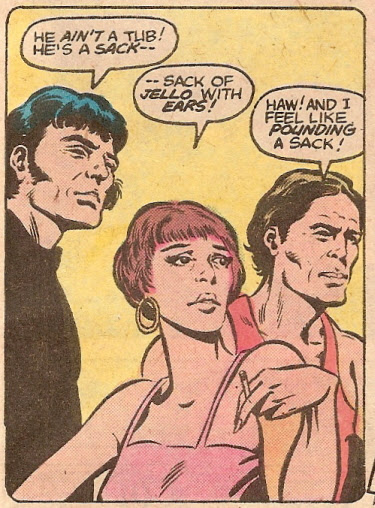 In close-up, we now can see that "Tub" is being bullied by a gang of thirty-something sophisticates.
Posted by Jeremy Rizza at 5:49 AM 7 comments: 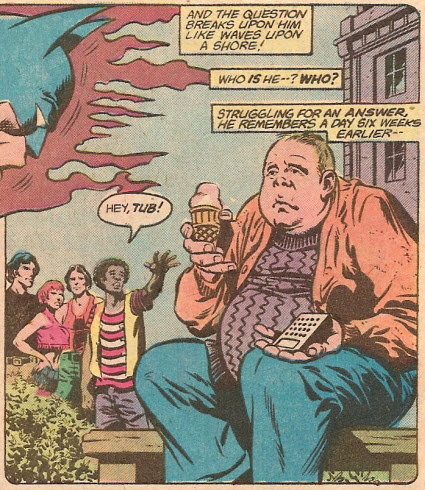 "Tub"? So that's where I've seen him before! It's just that I didn't recognize him, without that undersized sailor cap hovering over his noggin. 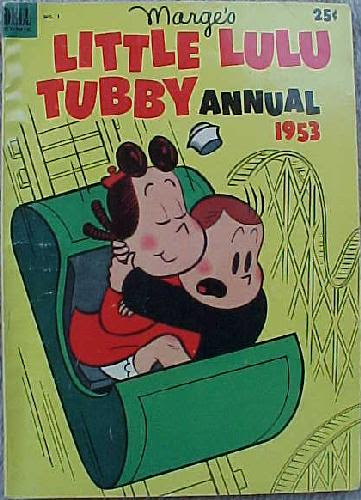 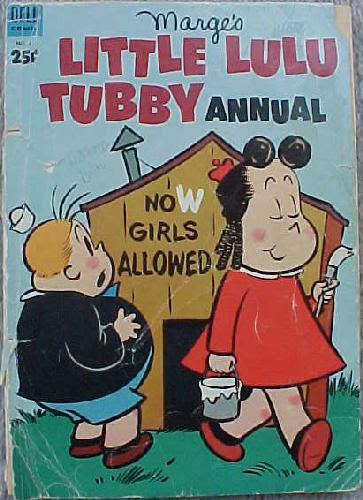 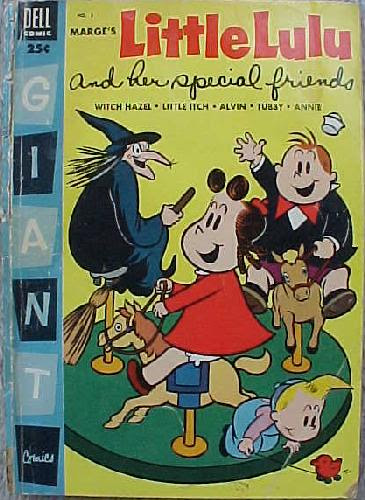 (A special thank-you goes out to Michele Maki's "Little Lulu" page, which was the original source of all these covers.)
Posted by Jeremy Rizza at 5:26 AM 6 comments:

The Sphinx in Pink 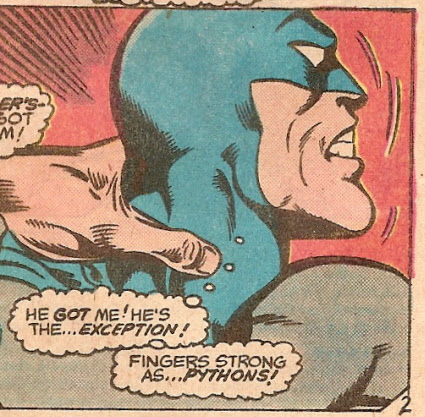 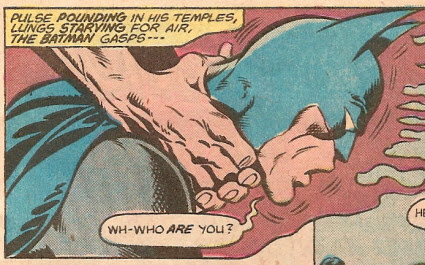 Big Pink up there is throttling Batman so hard, his head is emanating pork gravy! It's a manly miracle!

So... who is this guy, anyway? Since he refuses to introduce himself, it makes his mystery all the grander. Is he a refugee from one of those freakadelic new PBS kids' shows? An early adopter of the German "industrial pop" aesthetic? A once-handsome pajamas-and-goggles model, mutated by a gamma bomb into an engine of pastel destruction? I'm tantalized!

I personally think it would be awesome if he turned out to be the DC Universe cousin of the John Byrne Marvel villainess, Pink Pearl. Remember her? She was a radical Québécois separatist and circus "fat lady", and she wore a pink dress? And later on, when Bill Mantlo took over writing "Alpha Flight", he kept referring to her as "Pretty Pearl", probably because Marvel's lawyers finally realized that "Pink Pearl" is a brand of eraser?

Or maybe he's just a metaphor for Catwoman's clitoris.
Posted by Jeremy Rizza at 6:09 AM 4 comments: 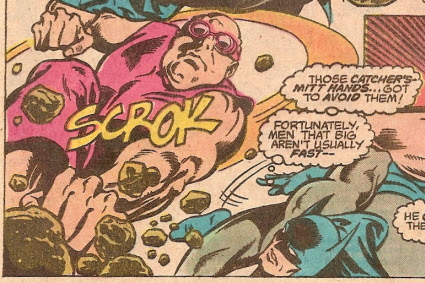 That's what Storm Boy is counting on! (I once told Storm Boy about a gas station/convenience store I saw back in the 21st century, called -- I shit you not -- "Kum & Go." His reply: "Sounds like every date I've ever had! Nobody wants to cuddle anymore!")

I mean, I presume this "Ox" character he claims to be dating is a "big man." Unless he's some spindly, pot-bellied Ivy League intellectual whose full name is "Oxnard M. Nancypants (Jr.)" and he spends every evening just doing Storm Boy's hair, instead of, y'know, doing Storm Boy. Huh. But I digress.

It was just last week when this all (allegedly) started.

I was at the detective agency, comparing tentacle-print records, and Tusker was regaling Dentata Damsel with that story about the time he crashed his hoverboard into a pair of mating camelephants and was trapped underneath them for two days while they finished their business. Dentata Damsel was smiling vacantly at him and nodding, while nibbling delicately on a piece of rebar she'd found somewhere. Then she giggled and put her hand on his, and said something to him in that whispery, mumbling voice I've grown to despise. The next thing I know, Tusker has plopped his chunky ass on my desk.

Tusker: You know. Me and Dentata Damsel. I think it's time to make my move!

Me: You're kidding, right?

Tusker: What? She really likes me! I make her laugh, I'm always fetching stuff for her when she's too tired to leave her desk, she tells me all her personal problems, and I rack my brain coming up with solutions for them...! Just now, she said to me, "Tusker, sweetheart, could you grab me a box of staples?" She called me "sweetheart"! The next step is, we go out! Um... isn't it?

Me (smoothing out the plasto-film sheet Tusker creased by sitting on it): Nope.

Me (hoisting my enormous metal tankard of space-java): Because, genius -- setting aside the fact that an office romance is a horrible idea -- all that shit you just described isn't sexy at all, and it sure as hell hasn't made you into a potential lover in her eyes. It's made you into a pal. (takes a swig of the powerful coffee-like subtance -- which is black, natch)

Me (spits out space-java): Bwah! Sorry. Tusker, amigo... if Dentata Damsel is like most people, she wants her boyfriend to be somebody who makes her forget about her problems, not somebody who solves them, and who suprises her with things she never realized she wanted, not someone who retrieves crap for her like a dog.

Tusker: Dang it. I'm an idiot.

Me: Rookie mistake. Don't worry about it. There's plenty more ladies out there.

And just as Tusker trudged away from my desk, Storm Boy breezed into the office. Gadfly Lad looked up from his desk, glanced at the clock, and hollered to him that he was "14 minutes and 3.297 seconds late." By way of a reply, Storm Boy thwacked Gadfly Lad's forehead with his thumb and index finger as he passed by. The feather-light l'il Imskian toppled backwards, chair and all. Storm Boy was positively glowing. No kidding, he looked like he'd been polished. Everything was shiny. And he reeked of cologne. It was stifling. Making a note of Tusker, who by then had emerged from the supply pod with tears streaming into his mustache, Storm Boy bustled over to my desk.

Storm Boy: Mornin', Blockade Boy! So, what's the matter with our own private Henrik Egerman this time?

Me: I had to shoot down his hopes and dreams again. For his own good, of course.

Storm Boy (with a hint of mockery that makes me want to punch him): Oh, of course!

Me: You stink, by the way. What, are you moonlighting as a perfume spritzer?

Storm Boy: No! This is just how my new boyfriend likes for me to smell!

Me: Feh. You're drunk again, aren't you?

Me: Yup. You're off the wagon. Let me check your breath.

With only nominal protesting on Storm Boy's part, I grabbed his head, pried open his mouth, and took a good long whiff.

Me: Jeebus! What've you been eating? Garbage? You might want to look into some mouthwash before your next big date there, killer.

Me: So, who's the lucky guy? Assuming you aren't just making this all up.

Storm Boy: His name is "Ox" and he's everything I've always dreamed of in a man.

Me: What? I'd like to meet the guy! I can't have you wasting your life with somebody who's unsuitable, y'know.

Storm Boy: That's the problem. No, Blockade Boy, I'd like to keep Ox to myself for just a little while.

Storm Boy: Oh, how can I put this...? Blockade Boy, you're great. Honestly. You're the absolute best. You're like a big brother to me, or like a really overbearing uncle, or maybe just a psychotic gorilla that kidnaps you and won't let you leave its cave, but...

Me (impatient): But what?

Storm Boy (squeezes my shoulder, warmly): ... and I mean this in the nicest possible manner, but... you ruin everything.

And with that, he flounced into Eyeful Ethel's office. There was a lot of high-pitched squealing and giggling for about twenty minutes, while I stewed at my desk.

So, even though my life is already complicated enough, I've decided I'm going to find out what I can about this "Ox" guy.

For Storm Boy's own good, of course.
Posted by Jeremy Rizza at 6:14 AM 7 comments: 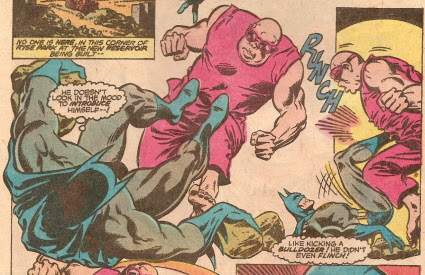 Really, Batman? Kicked a lot of bulldozers in your time, have ya? Or are you thinking of that souped-up Zamboni that Mister Freeze used to tool around in, and which I have just made up?

Also, I think you'd have better luck stopping this dude if you aimed your feet just a smidge lower. 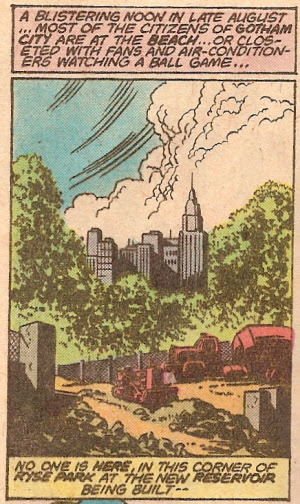 Yes, every Gothamite is either at the beach, or closeted. With fans. Specifically, delicate little Japanese fans, which they flutter, coquettishly. 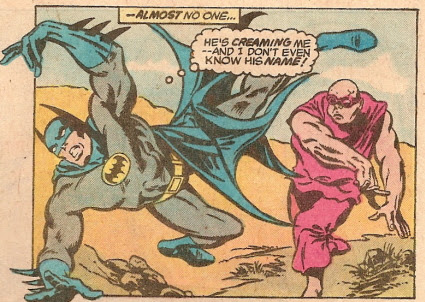 Heh. I was going to type, "Sound familiar, Storm Boy?" but I just remembered, he's the one with the (alleged) fancy new boyfriend ("Ox"), and I'm the one who's nearly bankrupted himself with an addiction to man-whores. Hmm. Maybe this "Ox" guy is a man-whore. He's got the name for it, and -- aw, hell! What if I've slept with Ox? That puts me just one slab o' beefcake away from sleeping with Storm Boy!