Yesterday I gave you all a glimpse of the King, the crimeboss who employed the Queen Bee. 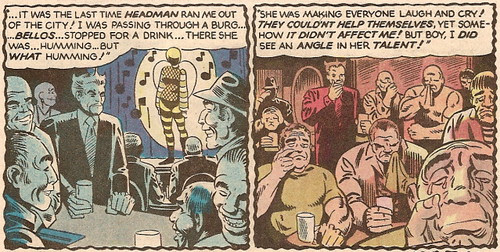 All the other men in the room were totally grooving on the curvy young woman in the bee costume yet "somehow" it didn't affect him. "Somehow"...! Whatever! It's because you're gay, King. Just like I knew I was gay when the sight of Teri Hatcher in a restored holo-recording of "Soapdish" had no effect on me, and also because of all the guys I was boning.

Viewed from a distance, the King's hairstyle might be mistaken for a merely wind-blown coif, or perhaps one with a modest set of hair-horns, like Cain's or Damon Hellstrom's. Ah, but it's so much more extravagant! 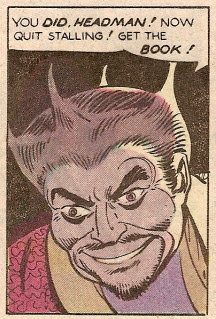 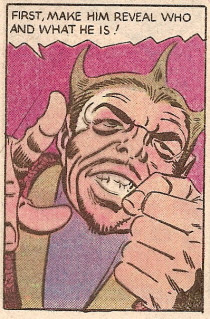 Now that, my friends, is a supervillain hair-do. Bravo, King! His henchmen are lined up outside his one bathroom doing the pee-pee dance for hours every morning while their liege primps and preens. The King probably measures each spike to ensure that they're all the exact same height. I bet he fantasizes about somehow weaving actual jewels into his hair to carry the illusion of a crown even further, and then he dismisses the idea because it would look too queer even for him and then he sits down on the edge of the tub and just feels depressed for a while. No doubt he's in a supervillain baseball league, and his batting helmet has holes drilled in it so his hair won't get ruined. And when he dozes off at strategy meetings in his crappy rented throne, the henchmen all take turns using his hair to skewer various items, like inter-mob memos and slices of processed cheese.

The good guys in the "Missing Man" story all have normal haircuts, with the exception of the title character. 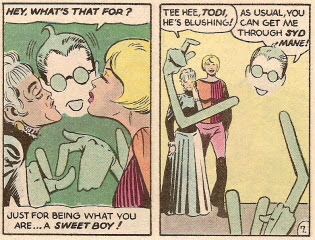 That's not an artfully-arranged forelock. That peculiar curl is sprouting from the very top of what passes for the Missing Man's head. An unfortuate choice, since it makes his mostly-theoretical noggin resemble a tomato, or perhaps a "do not disturb" sign. I will give the Missing Man credit for the cleanliness of its shape. Not a hair out of place! Assuming the Missing Man even has hair. I'd love to know his secret (so I can steal it!) but since he's a Steve Ditko character I can only assume it involves a clunky belt or other high-tech device, a mysterious unnamed energy source, and the sound effect "FWAASSHH!" In which case, forget it. Because that is so not my style.
Posted by Jeremy Rizza at 5:29 AM 5 comments:

Putting The "Oof!" In "Bouffant"

My pal Scipio has often written about the most terrifying beehive hair-do in all the known universe... Night Girl's. I believe I have discovered its gentler, yet no less powerful counterpart. The Venus to its Mars. (Or the Mumm-Rana to its Mumm-Ra if you're a spaztastic dorkatron.) Behold... the bouffant of the Queen Bee! (From the "Missing Man" feature in "Pacific Presents" #1, October 1982.) It hums!

Sure, people may try to convince you that it's actually the Queen Bee herself who is humming, but I have it on good authority that the intoxicating humming sounds emit from the immaculately-arranged strands of her bouffant. And how are you going to prove me wrong? Her lips never move! But I digress. Here's how it works: the heavenly melody is teased from the individual follicles by the slightest air current, just like the wind whistling through high-tension wires. Only the King can resist the bouffant's charms, and that's because his own spiky hair creates a counter-frequency. (Duh. It's science.)

But the Queen Bee's bouffant isn't just a musician. It can also act! Let's look at some of its many moods. 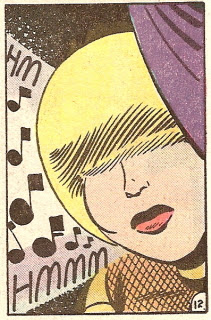 The Queen Bee's bouffant is pensive and mysterious. 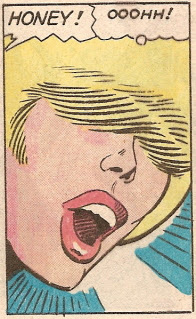 The Queen Bee's bouffant is high-strung and easily startled. Especially when someone mentions honey. 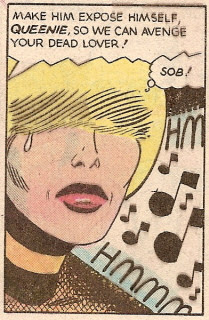 The Queen Bee's bouffant weeps openly and it doesn't care who sees it.

The Queen Bee's bouffant is capable of delivering a soliloquy from a Lifetime Original Movie.

In short, the Queen Bee's bouffant doesn't demand your respect. But then, it doesn't have to. It beckons you to your destruction with its siren song, and like Odysseus, you have to lash yourself to a mast or be smashed against the rocks.

Long live the Queen Bee's bouffant!
Posted by Jeremy Rizza at 6:23 AM 5 comments:

In "Eternals" #5 (December 2006) Ikaris and Thena are so dynamically wonderful that they can barely be bothered with disguises. Ikaris chose a brown trenchcoat, which is the best thing to wear when you want to send the subtle message "HEY LOOK AT ME I'M INCOGNITO!!!" (These garments are normally accessorized with a humongous "Spy Vs. Spy" sun hat, itself a great attention-getter since nobody in their right mind ever wears one.) Better yet, Ikaris didn't even bother buttoning the coat. Naw, he's rockin' it Gambit-style. But Thena has one-upped the levitating Lothario by simply draping a beach towel over her head! 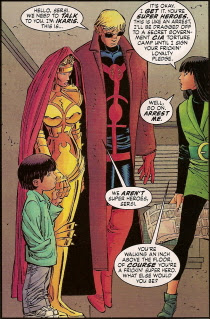 Here are some other disguises Thena considered:
1. Groucho glasses
2. A sauce pan with two eyeholes drilled into it
3. Rainbow wig
4. Dr. Who scarf
5. Indian chief headdress
6. Hammer pants
7. Big foam cowboy hat
8. Hula skirt and coconut bra
9. Exact same suit of armor, only in bronze
10. Admiral's hat, made out of a strategically-folded newspaper
11. Oversized papier-mache version of her own head, like they wear at Carnival time
12. Romper Stompers
13. Rubber Frankenstein mask
14. Lee press-on nails
15. Those headband deals with the antennae on them, usually they end in big plastic stars or something and they kind of bobble around because they're on springs, you might see them at a little girl's birthday party, I don't know what they're called
16. Hotpants
17. Top hat and cane
18. Milk mustache
19. The front half of a pantomime horse costume (and Ikaris gets the back half)
20. "Frankie Say Relax" t-shirt
Posted by Jeremy Rizza at 12:14 PM 6 comments:

Legion Of Substitute Costumes: The Mess

I honestly did not think my Stone Boy redesign would gross out so many people. Which says more about my ability to read a room than anything else. I inked the body hair last, and for a second I considered just leaving the guy hairless. And then I glanced down at my hairy inner thighs and decided, "screw it." But I swear by all that's fashionable that I didn't set out to make it look like fetish wear. Honest and for true. And then I read the comments and I thought "Aw, shit. They're really gonna hate my Mess redesign because it looks like a fucking gimp costume." Oh well, huh? Let's go! 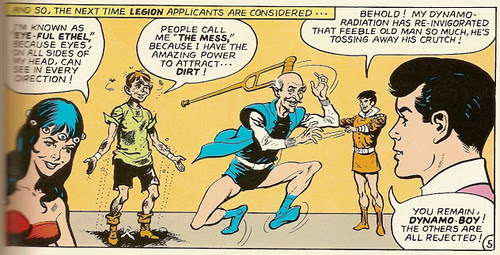 Here's what I'd do with him: 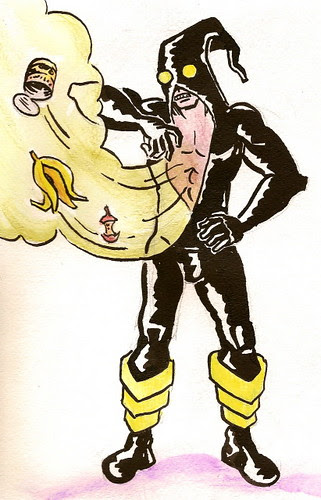 My idea? Wrap the smelly l'il fucker up in a garbage sack --er, I mean, "containment suit." It would have a big vertical seam (zippered, or maybe it would use ZipLoc technology.)

I made the suit black and shiny because it's supposed to evoke a trash bag, and because I wanted to emphasize the silhouette. It's all based around the pointy, drooping cowl. Kind of like executioners would wear. And not gimps! Nope! The pointy shape is mirrored in the Swamp Thing cut-out for the mouth. The yellow goggles and the boot trim provide a respite from all the black.

I figure The Mess could keep the suit sealed up most of the time, marinating in his own funk, and then in battle he could open it now and then to paralyze his foes with whiffs of devestating stank. And assuming he's on the level about having superpowers, I bet he could practice with them until he became a black hole for garbage -- kind of like a matter-specific Chunk. He'd at least be useful for rescue missions, like finding civilians who are buried under rubble. Legion-worthy? Oh, hell no. Useful? Yup!

So keep on stinkin', The Mess. I'm sure you're good for something.
Posted by Jeremy Rizza at 6:14 AM 10 comments:

Like Polar Boy, Legion rejectee Stone Boy had complete control over his powers. Unlike Polar Boy, Stone Boy's power was almost completely useless. Except for providing a decoy target for really stupid armies.

"Seed storehouse"?! It's called a sperm bank you bumpkin! Grow the hell up already! Christ. But my rage, it's distracing me from the matter at hand: Stone Boy's costume. Stone Boy's horrendously ugly costume. Not that I blame Stone Boy himself, mind you. I figure his mom made it for him.

Y'see, Stone Mom was about to throw out that bolt of orange spandex she'd found in a dumpster behind the fabric store, when suddenly she got an idea! Also, check out paunchy Stone Dad in the background. (Special guest star: Gordon Jump!) So by the looks of things, not only will Stone Boy never be admitted to the Legion of Super-Heroes, he's also going to go bald one day. Glad I'm not him. *casually runs a hand through my lush, beautiful hair*

But don't think I'm an unsympathetic bastard! Naw, I'm a sympathetic bastard! I came up with a more handsome look for the guy, and a better idea on how he can use his powers. See, all he needs to do is go to the top of a steep slope, wait for a bad guy to show up, crouch into a ball, turn into stone, and VOILA! 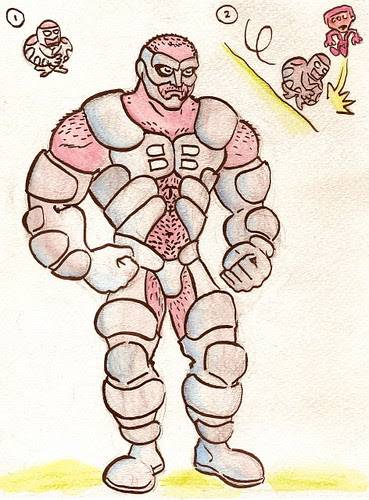 I gave him some padded body armor for when he's not using his "will-force" to turn himself to stone (hey, I can do that too, sort of) and I used the shape of the pads to design a logo for him. It's a stylized "S" and "B." Because your old Earth alphabet looks so much better than Interlac. The cropped hair and stubble is a nice tough look for him, and along with his deliciously excessive body hair, it provides a textural contrast with the armor. Which is why I left so many holes in it. What?! He can turn to stone; what the hell would he need body armor for? Oh, now I'm confused. What was I talking about?

Tomorrow: Legion Of Substitute Costumes: The Mess!
Posted by Jeremy Rizza at 6:08 AM 7 comments: