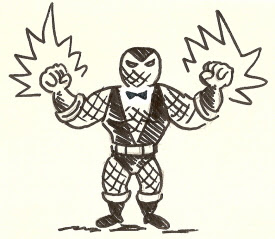 The Shocker already had the vest. All he needed was the bow tie. Now he's ready to knock over a classy French restaurant, or perhaps a trendy bistro! (Let's just hope he doesn't get mistaken for the maître de.)
Posted by Jeremy Rizza at 6:10 AM 9 comments:

I'm a man who keeps his promises (when it's convenient for me). Today I'm fulfilling a pledge I made, oh, around April 2006 I think, to Steven of "Roar of Comics" fame: sprucing up supervillains with just the right accessories! This will be a recurring feature, interspersed with my other types of posts. Let's start with M.O.D.O.K., shall we? 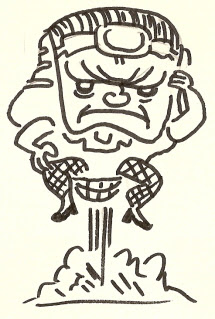 I think M.O.D.O.K.'s best feature is his shapely gams, and what better way to show those off than with fishnet stockings and high heels? I think it gives him a dangerous, sexual vibe, like Tim Curry in "The Rocky Horror Picture Show." And just think of the thrill it'll give those buttoned-up A.I.M. scientists!
Posted by Jeremy Rizza at 6:01 AM 4 comments: Or "Shadow Puppet Kid" if you insist the joke be tasteful. (What are you, the Pope? Jesus Christ!)

Behold the majesty of yet another "designer original" by my dear friend Storm Boy, whose relentlessly literal thinking is matched only by Anya from "Buffy the Vampire Slayer" and, of course, Alex Ross. This particular costume is from his Minimalist Period (March 5th through March 13th, 2972) and I think it shows impressive restraint on his part. It's not even pointy, and you know how much he loves that shit. However, ol' Stormy went too far in the other direction and made it boring. And then there's that goofy handprint on the tunic. So Karate Kid fights with his hands... big deal! He also uses his feet. So why didn't Storm Boy put a footprint on there, too? Hell, why didn't he just cover the whole damn thing with footprints and connect them with dotted lines, like one of those charts that shows you how to dance the mambo? Holy balls.

Fun fact: Storm Boy submitted a similar design to Timber Wolf, only the hand's thumb was raised and the index finger was folded back. (Think about it.) I don't think he ever heard back from the guy.
Posted by Jeremy Rizza at 6:18 PM 9 comments:

You know your comic book empire is in disarray when the letterer is micro-managing the colorist. ("Blue-skinned beauty"... FEH!)

Blockade Boy here, with the start of a brief (yet all-too-necessary) break from the Gravity Girl saga! I'll finally get around to the "Legion of Substitute Costumes" post for Rainbow Girl on Monday and I assume Storm Boy's post will be soon... the obsessive li'l bugger has been spending every waking hour (which for him is about six per day) writing it and when I try to ask him about his progress he mainly grunts or waves a broken bottle of space rum at me without even looking up, like I'm nothing, and then of course I have to slap the bottle out of his hand and belabor him about the head and shoulders with my cane or magnetic codpiece and then he just sinks to the floor in a heap and sobs for a little while. So I guess it'll be ready when it's ready. Whatever. And tomorrow I'll have the first of my "accessories for super-villains" (suggested by brilliant blogger Steven)!

Anyway! Behold the majesty of two Storm Boy original costume designs! Yes, both Storm Boy and myself finally hit the "big time" and sold some costumes to the Legion! I was responsible for Cosmic Boy's kick-ass black outfit as well as Element Lad's tasteful "green arrow" number, while Storm Boy can be held responsible for these things. The above panel depicts the ladies' initial reactions to seeing themselves in Storm Boy's garments. They're holding up better than I would under the circumstances. It always looks better in the store, doesn't it, gals? (You'll note that Shadow Lass already has located a gas can so she can burn her orange bra.)
Posted by Jeremy Rizza at 6:28 AM 7 comments:

Sorry, Folks, That Contraption Doesn't Actually Take You to Oz 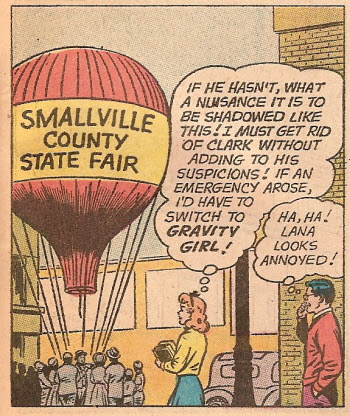 Hey, if Smallville rates a trolley system then HELL YES they're gonna have hot air balloons! Official City County State hot air balloons! And maybe a couple of zeppelins. And then there's that spaceship ol' Zebulon is buildin' out by the crick. The feds are concerned about all the plutonium Zeb's gatherin' but Zeb, he don't worry none. It's for "peaceful purposes." Naw, there's no way no how that spaceship is actually a giant missile he's gonna fire at th' Godless abyss o' perdition some folks call "Metropolis." No sirree! So you all kin jess git now. Go on... git! Afore I grab muh shootin' iron.

Sorry, I seem to have gone off on a tangent there. Anyway, it's the "Smallville County State Fair" part that gets my goat. It's either a county fair or a state fair. It's not both! Unless Smallville has gone and seceded from the Union again. It's possible. Lord knows it's large enough.
Posted by Jeremy Rizza at 5:52 AM 6 comments: 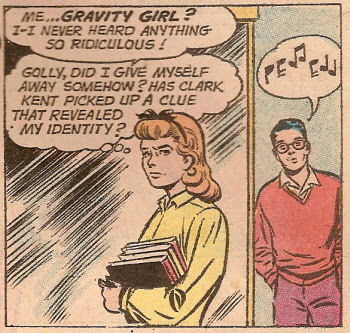 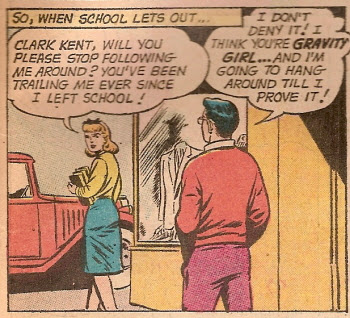 Y'know, take away the whole Superboy/Gravity Girl angle and this scenario starts to look more like something you'd see reenacted on "America's Most Wanted." ("What Kent didn't realize is that the whole bloody massacre would be witnessed by eleven-year-old Willaby Fenton, who had made a habit of peeking through the windows of the Lang residence...")

Oh, and I see they're passing that one menswear shop frequented by Colonel Sanders, John Travolta, and Mister Roarke from "Fantasy Island."
Posted by Jeremy Rizza at 5:47 AM 11 comments: 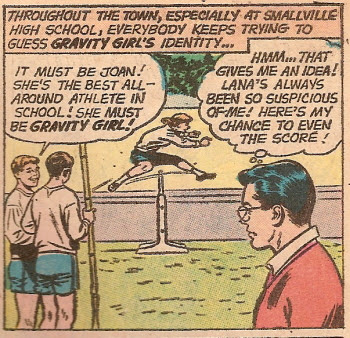 While attending Smallville's very first All-Lesbian Track Meet, Clark gets a great idea! (Seriously, either those two ass-jutting kids Clark's looking at are girls with butch haircuts or else they're boys with atrocious posture. Huh. It's probably that second thing. Smallville is the Rickets Capital of the World...)
Posted by Jeremy Rizza at 5:31 AM No comments: 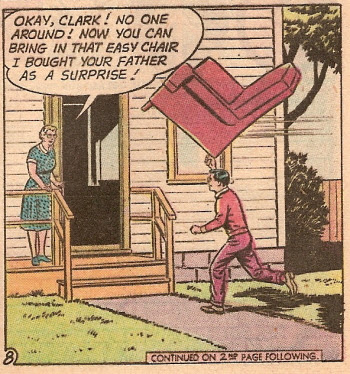 Because I've added labels (a.k.a. "tags") to all of my posts! And I added a handy-dandy complete list of the labels to this very page you're on. It's right under the list of blogs. All of the design categories are listed, of course, and you can also find every post with your favorite hero in it. Just for the sake of brevity I didn't add any "villain" labels (except Doctor Doom, because how could I not) and my "Contest of Champions" posts had so many heroes that to list them all would exceed Blogger's labeling capacity for an individual post, so I just summed it up with a "Contest of Champions" label and called it good. Also for the sake of brevity, I restricted "creator" labels to just a few people I seem to talk about a lot. Which right now is just Geoff Johns and Herb Trimpe. Remember those lists of previous installments I used to add to my posts? I'll be editing those bits out since they've been made obsolete. (Or as that guy on that one Twilight Zone would say, "OB-SO-LETE!!!")

I learned a lot of interesting things while I was labeling. Like?So be sure to check out the labels. Y'know, since I busted my ass working on them. (Seriously, my back is killing me for some reason.) Or as I like to tell Weight Wizard, "Play around... have fun with it!"
Posted by Jeremy Rizza at 6:16 AM 9 comments: 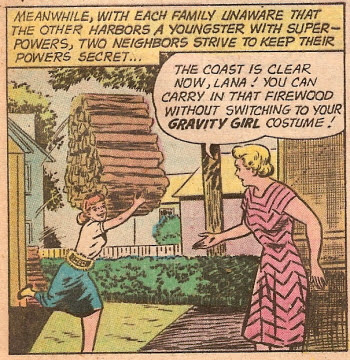 Man, Mrs. Lang really loves that dress, huh? Or does she just wear the same one every day? And I do mean "the same one. She's probably like the lady in that ad from your era who strolls happily through some grimy metropolis with clouds of urine-bearing steam assailing her from all directions, and then she makes it home and she throws her ruined frock into some contraption that steams out the stank, and then she puts the dress right back on again and joins her hubby for a night on the town! Except in 1961 Smallville that magical washing machine hasn't been invented. So every time Mrs. Lang gets a stain on her dress she's forced to run back inside her house, pull down the blinds, and strip down so she can wash the dress while she waits anxiously for hours in her slip and housecoat, and she's starting to get ideas like Oh dear I've washed this beautiful dress so many times it may be wearing on the fabric and perhaps I can't go much longer until it gets thin enough that one can see my bosoms why just this morning that Fenton boy from down the street rode by on his tricycle and his gaze lingered more than it ought oh what shall I do? So she starts to avoid situations where she might pick up a stain, like church picnics and and anyplace where there are automobiles and days on which it might rain and finally she just stops going out and she winds up spending all day in her bedroom never taking off the dress and she begins to reek only she doesn't care because she's gone into a catatonic state but if Professor Lang or Lana or that doctor they called tries to touch her dress she goes apeshit and has to be taken down with a tranquilizer dart.

Or yeah, maybe she just has a bunch of identical dresses.
Posted by Jeremy Rizza at 5:32 AM 8 comments: