Rescue Me Bonus: Son of the Annihilator

I'd like to start out with a belated tip of the cap to Sleestak for suggesting yesterday's post! Thanks, pal! Now, let's get down to business.

The main story in "Action Comics" #356 (November 1967) starts out on a bizarre note, as the Annihilator, a doughy Eurotrash doofus in an absurd costume, orders Superman to leave the Earth within forty-eight hours... and Superman agrees! Because the Annihilator is a dangerous individual. And he's obviously, unpredictably bat-shit crazy... a man who would willingly dress like that is capable of anything!

But the proceedings take an even freakier turn when the Annihilator decides to do what any publicly-loathed celebrity does to improve his image: adopt a kid who can show up in a few newspaper photos before he's handed over to the nanny for the rest of his natural life! His new son? A smart-mouthed teenage delinquent. Because, really, isn't that the obvious choice? Let's take a look at the irrepressible little scamp, starting with the cover. 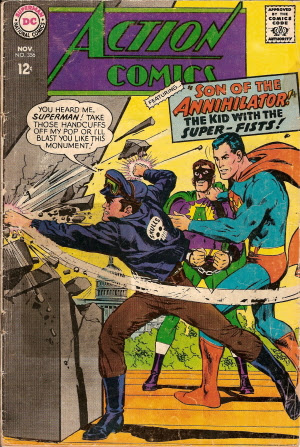 What's wrong with this picture? (And no, the Annihilator's "Nostril Libre" mask doesn't count.) Here's a hint: it was published in 19-freaking-67. And yet the Son of the Annihilator is dressed like Marlon Brando in "The Wild One" (a film from 1953!). It's yet more proof of how DC was getting thoroughly drubbed in the Coolness Wars by Marvel Comics. Sure, Stan Lee was a middle-aged crypto-fascist conservative, but at least he could pretend to get his grooviness on! DC wore their John Birchian squareness right on their covers where every hippie could see it. But wait! It gets worse! Thanks to the cover artist (I'm guessing Neal Adams?) the Son of the Annihilator appears to be a darkly handsome "bad boy" whom any teenage girl (and more than a few teenage boys) would swoon for. So far, not bad. But let's see how interior artist (Wayne Boring, I think) depicts him! 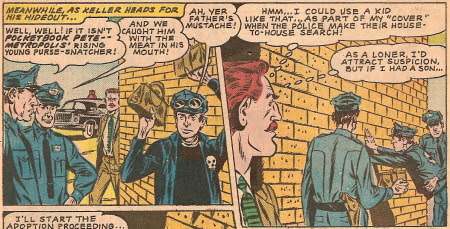 Yipes. Kinda homely. (And he stole all his insults from old "Dead End Kids" films.) Well, maybe he looks better when he smiles. 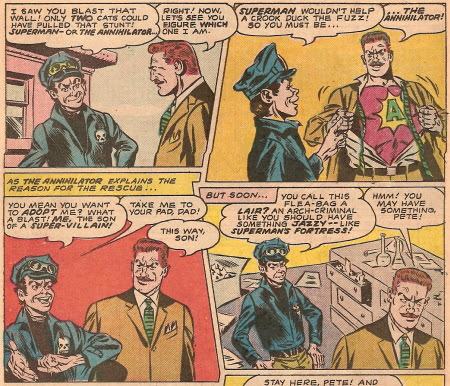 Gah! He's hideous! Who's his biological father? The Prankster? Criminy! I can forgive a lot in a guy (evidenced by my continuing relationship with Weight Wizard) but a deficient personality and an ugly mug? Good night male nurse!

All that aside, I must say that "Action Comics" #356 had an intriguing undercurrent. Leather-loving outsider "caught... with the meat in his mouth" approached by a brawny, elaborately-moustachioed older gentleman who wants to be called "Dad"? (Haw! Your father's mustache, Pocketbook Pete!) I dunno. It just really resonates with me for some unknown reason.

Anyway, like a lot of father-son relationships, Annihilator and Son hit a rocky patch when hijo ingests some contraband substances.

"All right, son! I'm glad to share my super-power with you." Which of course the Annihilator is going to say, since his own super-power has worn off, and the smirking little shit he calls "son" would punch his goofy noggin off his fat neck if he so much as looked at him funny. ("Daddy-o." Aw, for chrissakes, DC Comics of 1967--!) You know what I would have liked to have seen in "Infinite Crisis"? Son of the Annihilator and Superboy Prime going all "Rock'em Sock'em Robots" on each other. Just get rid of both of those annoying dillweeds at the same time.

So. The Son of the Annihilator is a lot of things, but one thing he's not is cool. He needs one of my patented Blockade Boy makeovers, pronto! 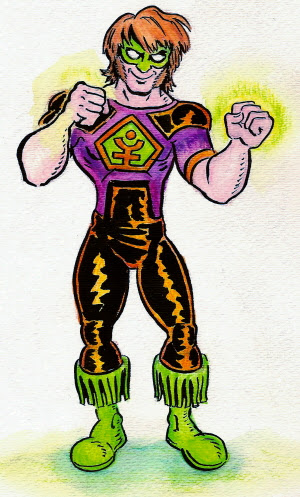 Ah, that's better. The Son of the Annihilator... wait, he needs a name that's not so clunky... I believe I'll dub him "Kid Annihilator" or KA for short... anyway, Kid Annihilator has a shagadelic rawk 'n' roll haircut now, complete with muttonchops. He doesn't bother to cover up his facial hair with a mask like the Annihilator does because he doesn't care about protecting a secret identity. He has the Annihilator's logo on his chest, but it's bordered by three orange shapes that hark back to the radioactivity symbol. That relates to the glow of his powerful fists. His boots are fringed because it's current and groovy and youthful (for 1967) and also because I like the contrast between supercostumes and street clothing. (When it's not overpowering or overdone, I should add. Like trenchcoats... ugh!) In my sketches he had a fringed vest to match, but I decided it covered up too much of my design. And the color scheme is all secondary colors because it compliments the Annihilator's primary scheme and it's more far-out, maaaannnn! Now this guy would look at home battling the Teen Titans... who are as hip, sadly, as 1967 DC ever would get. In my head I can see a dynamic Nick Cardy cover with Kid Annihilator smashing his way through the Titans in front of the words "Make War, Not Love!"

What else do I see in my head? Oh, you don't wanna know. You couldn't handle it! What? You're sure? Okay, I'll share one more thing: I can see Weight Wizard's face after I disrobed in the Conjugal Visit Pod at the addiction treatment center. I take it he'd never seen a robotic dingus before. And he'd especially never seen one with my self-designed Robot Hand with Pimp-Slapping Action attachment! Oh, I'm sorry. I'm sharing too much. Suffice it to say Weight Wizard learned his lesson. For now! And inbetween visits, he can think of me while he tries to scub off the huge motor oil stain I left on his back. Er, I'm sharing too much again, aren't I? See you next Monday!
Posted by Jeremy Rizza at 5:28 AM 11 comments:

Rescue Me Bonus: the Annihilator

Here's a costume redesign that doesn't fit into one of my regular categories: 1960's Superman villain, the Annihilator. One of my many cultured and tasteful commenters* suggested I tackle this joker's apparel, mainly because his nose pokes through his mask! I'd forgotten all about him until last week. That's when a laser-guided demolition crew disintegrated a museum to make way for a new Bismoll MacMattercuddy's family restaurant (try the copper-plated breakfast burrito!) and discovered an ancient comic book shoppe underneath! It turns out the whole thing had been engulfed in lava while the inhabitants were in the middle of a HeroClix tourney. Thank goodness mylar and cardboard proved to be the perfect protection against surging, molten death. Size XXXL Vampirella t-shirts? Not so much. All that was left of the humans in that crowded death-box was some Pompei-style rock statues studded with candybar wrappers and the occasional ingrown beard hair. Long story short, the development company claimed the store's merchandise through some arcane landlocked salvage law and auctioned the whole deal off, cheap! I snagged a ton of them, including a copy of Action Comics #356 (November 1967). It was perfectly legible once I chisled the rock off of it.

*I'm embarrassed and chagrined to admit that I can't remember who precisely. I even spent a couple of hours last night poring over my older costume redesign posts looking for the exact comment. I couldn't locate it, but I got many a hearty, booming, basso profundo chuckle from reading my own writing. Good heavens, but I'm clever! Er, anyway... maybe the person I'm thinking of sent me an e-mail instead. I dunno. 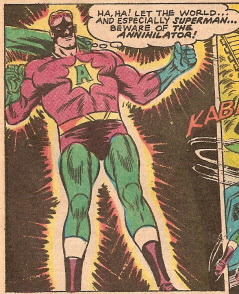 The Annihilator's power is cool enough. He's like an evil Human Bomb, powered by chemicals somehow left on the Earth by the Kryptonians (the Kree of the DC Universe... just dropping their untold scads of power-inducing crap all over planet Earth, like it's their own personal landfill). But that costume--! The main part of it is ugly, but in a completely boring way -- just like most characters that show up in your typical Superman story. But then... there's the mask. It does indeed have his nose sticking through it, all naked and nude and uncovered, with a frankly insoucient attitude reminiscent of Berlin in the 1920's. But wait! That's not the best part! The real beauty of the mask is that it covers up his upper lip... because the Annihilator's civilian identity, "Nobel Prize-winning biochemist" Karl Keller, has a handlebar mustache! 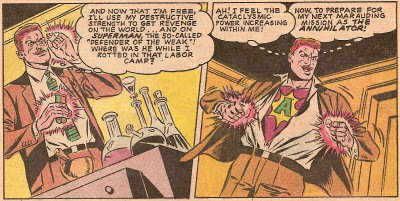 See? And he's not even drawn by Herb Trimpe! Honestly, I think the Annihilator could have had a much more illustrious career if only he'd dressed better! So here's what I'd do: 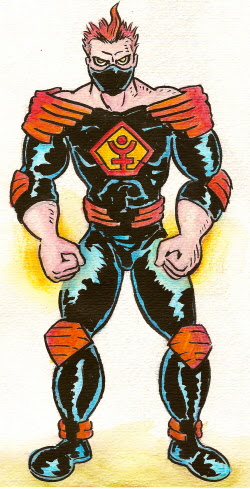 See, Annihilator? That's how you can enjoy both a supervillainous secret identity and a handlebar mustache while not getting laughed at! Well, at least they won't laugh at you in your villain costume, anyhow. I make no guarantees for how you dress in the privacy of your own lab. Because his powers are Kryptonian-based, I made his costume a riff on Superman's. That's why it's primarily red-and-blue, only darker, natch, 'cause he's a baddie. Instead of a cape, the red is supplied by the accessories, like the nifty shoulderpads. The Anime-style hair has one extra-long lock as a tribute to Superman's famous (and equally ridiculous) "spit curl." Except it's sticking straight up in the air and it's all spiky, to impart menace. No, for reals. Plus, he can just slick it back down while he's out of costume. The Annihilator's logo is an inverted Superman shield (evil!) with the alchemical symbol for the planet Pluto inside it, symbolizing upheaval and violent change. And sure, it looks like the intergalactic sign for a well-hung gentleman who's doing the splits, but so what? I checked out 21st Century industrial explosion symbols online but it turns out they're not designed very well at all. I could have done better, but none of you vacuous cavemen bothered to ask me while I was living in your idiotic time period. Feh. Your loss!

Tomorrow (you heard me): the Son of the Annihilator! Plus, Weight Wizard news.