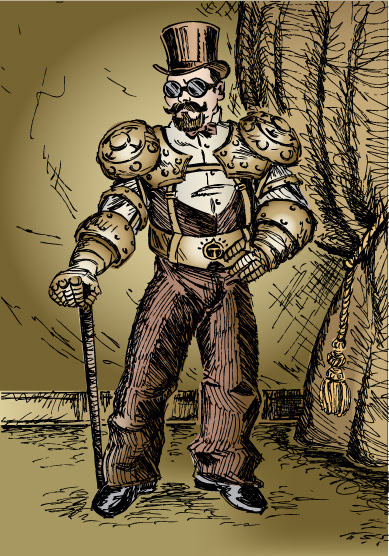 Here's fellow blogger Doctor Tectonic, in a little ensemble designed by yours truly. See? I can do formal wear! This is the picture I did in exchange for using the Doctor's tattoo ideas. It depicts the Doctor in a classy outfit of trousers, vest, top hat, and exoskeleton control harness. I wore something similar to court when I had to contest a hoverbike speeding ticket. I was forcibly ejected from the proceedings when I threatened to "destroy [them] all." Er, oops.

Doctor Tectonic is a steampunk-styled genius inventor, who owns both an earthquake cannon and a battlesuit, the latter of which I'm told resembles an egg with a handlebar mustache. Not that there's anything wrong with that. His otherdimensional alter-ego, Seth McGinnis, has the Doctor's glorious facial hair and goggles, but not the cannon or battlesuit. Which is kind of lame. Gee, I'm glad I don't have an otherdimensional alter-ego! (Jeremy who--?)
Posted by Jeremy Rizza at 6:10 AM 10 comments:

That's what all the closet-cases say, Brown.
Posted by Jeremy Rizza at 6:02 AM 4 comments: 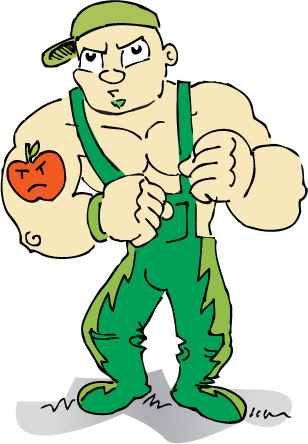 This muscle-headed goober is Si Las, codenamed "Bad Apple Boy." He's one of the new detectives at the Eyeful Ethel Detective Agency Featuring Blockade Boy, and I can't stand his phony ass. I hate his smooth, hairless body, which he likes to smear with baby lotion and potting soil. I hate his goofy Chia Pet soul patch. I hate his stupid sideways moopsball cap. I hate his two-tone footie-overalls, and his synth-rubber wristband that reads "LIVE WRONG", and how he wears the damn thing on the same arm as his dumb frowny-face apple tattoo, instead of wearing it on the opposite arm to provide visual balance, like any sensible person would. I hate how that whiskey-rough baritone voice he likes to use is a total put-on, as evidenced by the time I caught him talking to his brother on his Omnicom and he sounded like Mike Tyson. I hate how he goes on and one about how he's from Rimbor (the Toughest Planet in the Universe) but if you read his personnel file, it states quite clearly that his family moved away from there when he was like, two months old, and he spent most of his life on an agricultural satellite, and the only time he got into trouble with the law was when he threw a stink-bomb into a restaurant full of hyper-chicken farmers, on a dare. From his frat. GAH.

Okay, okay, so that's a lot of bile. I have to work with this tool, so I might as well remind myself of his good qualities! He, um, well... 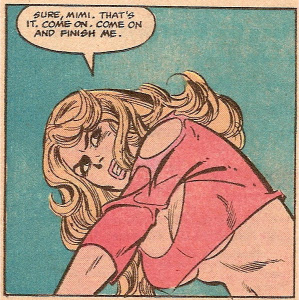 Here's the Dazzler, from issue number 13 of her own comic (March, 1982), bralessly fighting for her very life against the Grapplers! Not to be confused with the Gropers, whom I'm pretty sure are Chuck Austen characters. And this titanic tussle takes place in Ryker's Island! ("I've read about that place", Dazzler exclaims to her permed-and-mustachioed lawyer. "It's a JUNGLE!" No, dear. It's a prison.)

Now, you might assume from the tomato-red hue of Dazzler's top (with matching clam-diggers, and I apologize for how dirty that sounds) that she's wearing an actual prison uniform, and maybe she found the time to alter it into something trashier, and also she removed the numeric I.D. patch, and really that's an awful bunch of assuming, and I have to wonder at this elaborate dream-world you've created for yourself.

In fact, HELL NO, because these are the Dazzler's own clothes. See, the Dazzler apparently decided that this flimsy get-up -- sans bra! -- would be just the thing to wear to a rough 'n' tumble prison! Criminy. And yet, it's far from the most salacious ensemble worn by a female prisoner there! Let's flash back to a few pages earlier, when the Dazzler is unceremoniously dragged onto what appears to be the set of a Jim McMahon courtroom drama:

Yes, in 20th-century American prisons, the inmates just saunter around in their undergarments. ...DAMN IT! How come I never was told this? I could have volunteered to teach some brawny, nearly-nude he-hoodlums how to read, or some shit. And then somebody would have made an inspirational movie about me. For Colt Studios. ...Wow, my whole life could have been different. Holy BALLS!
Posted by Jeremy Rizza at 6:21 AM 9 comments: 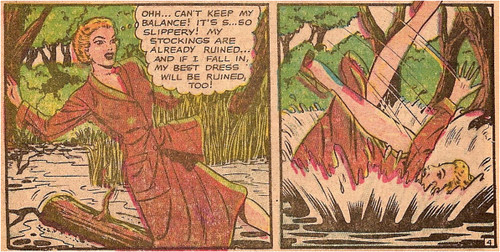 Wait, so you can't navigate a log in high heels? It's not a problem for any of the lumberjacks I know. (And if their socks get all squishy, it ain't from water.)

My jaded brain is boggling from the idea that her "best dress" is this limp, feces-brown, matronly "wrap" number. Seriously, what are the runners-up? A macramé ballgown? A cheesecloth trapeze dress? Two milk caps and a whisk broom? A sock in the jaw? For realsies, I just can't picture it!
Posted by Jeremy Rizza at 6:11 AM 10 comments: 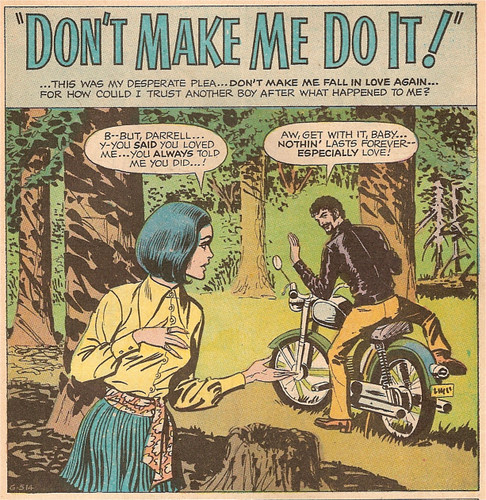 Forget that goateed heel, honey; he just got a job working in a Tom of Finland comic. (Seriously, why else would he leave a sexy manikin like her? She has twenty-two points of articulation!)

Bonus: Remember when those kinds of lapels were found in places other than clown costumes? ...Yeah, me neither.
Posted by Jeremy Rizza at 6:47 AM 7 comments: