As you know, I've been wearing the same old-timey Western outfit for several weeks and it finally occurred to me that I was being a bit ridiculous. So now I've decided to wear this Santa costume twenty-four hours a day! 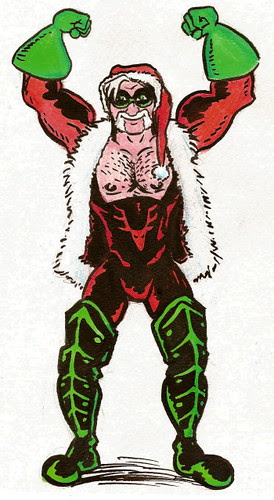 Ho, ho, homoerotic! Who could have guessed that "Santa's beard" would turn out to be Mrs. Claus? Oh, I sleigh me! ...Sorry. I'll stop now.

I started with the silhouette -- I knew I wanted a reindeer head embossed in leather over my unjelly-like belly and I knew I wanted the top half of my torso to be exposed and to be framed by the white fur trim on the jacket. At first this design involved a big wrestling belt. But I've worn one of those before, so I modified it into a leather corset/unitard deal. I paired it up with tall pirate boots to help focus the eye on the reindeer symbol. The boots have a stylized Christmas tree with branches that mimic the reindeer's horns. I toyed with several different lengths on the jacket, but I settled on mid-length because, again, it wouldn't distract too much from the reindeer head. (I thought about matador-length, but dismissed it as too cutesy.) Instead of my usual goggles, I went with a domino mask. It doesn't obscure my gorgeous green eyes and it doesn't get in the way of the Santa hat. The gloves are flared in a 17th century Russian style.

And to finish the look, I "fell off the wagon" and changed my hair color. All my hair is bleached out to pure white now. You heard me. All of it. I had to get Jeremy to help me with some of the hard-to-reach areas. The poor lad passed out at one point -- presumably overcome by my raw sexuality, although I wouldn't rule out the bleach fumes or my gassiness from all that turkey I'd consumed... I sounded like a Phillip Glass score, played on a tuba.

Oh, and FYI I won't be posting again until Tuesday. Jeremy is visiting his folks in Arkansas this weekend and like usual I'm banned from using his computer while he's away. That's okay. I think I'll hop in my time bubble and go mess with Clement Moore's head.

Have a great weekend, everybody!
Posted by Jeremy Rizza at 10:53 AM 7 comments:

How To Duplicate Iron Man's Armor Without Really Trying

In "Iron Man" #1, a standard-issue mad scientist named Mordius (as opposed to Biff, Ernie, or Jo-Jo) manufactures some knock-offs of Iron Man's armor.

Ever go shopping for, say, a DVD player and wind up going with the Goldstar instead of the Sony because it's cheaper? 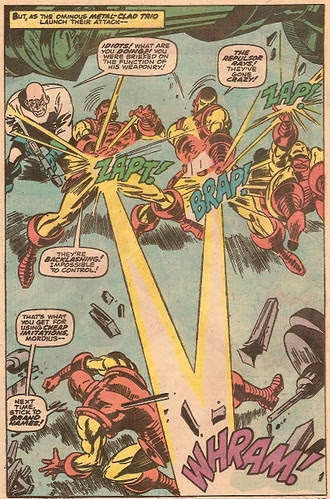 Other problems with the Mordius versions?

On a personal note... since I'm from a far-flung era where all mankind lives in harmonious cooperation I don't celebrate this "Thanksgiving" everybody keeps talking about. So instead I'll be enjoying an intimate turkey supper at Clive Barker's house! 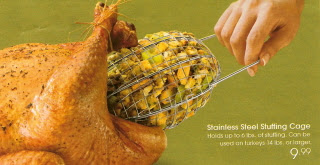 Animal Lad was rejected for Legion membership right after Polecat (ouch) and even worse, he was rejected by Dynamo-Boy. You remember Dynamo-Boy, don't you? He's the kid who used a piece of technology to simulate superpowers. Which is against Legion regulations. Not that they bothered to check. Funny, they're usually so thorough about that sort of thing. And Dynamo-Boy didn't tell them, either. Why would he? He was evil! As a "mole" for the Space Pirate Pack he contrived to kick all the other members out of the Legion and start afresh with a 100% criminal roster. Eventually things got sorted out, but not before the Legion of Super-Villains (don't ask) stuck their nose into things. They banished Dynamo-Boy to the (even more) distant future, when Earth was uninhabited and the Sun was dying. Hardcore! So it was in the middle of all this hullaballoo that Animal Lad tried out for the Legion. It was horrible timing. And a real shame, too. Check out his powers!

You know, I also have the ability to transform a man into a Bear but it involves a lot more leather, free weights, and fatty foods. *ahem* Er, anyway, let's get to the reason why Animal Lad didn't make the cut. 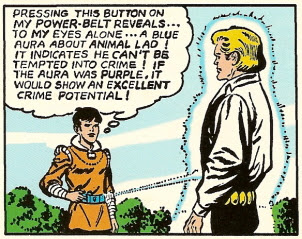 Because he's too good! *swoon* Aww, the poor fella! I want to do something nice for him. Like redesign his costume. 'Cause the shit he has on now? Coveralls with a Dave Cockrum belt? Not doin' it for me. 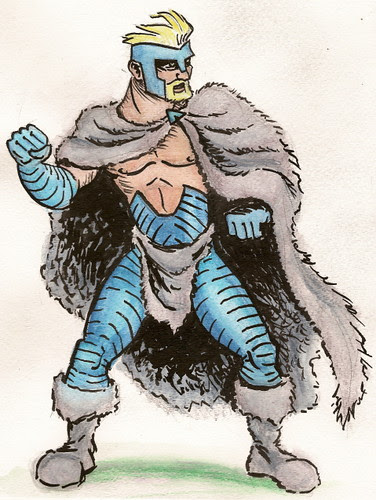 But this is! It's workin' for me like an illegal Durlan. On Sunday, baby!

My concept? Animal Lad's powers straddle the line between man and beast. My design follows suit by contrasting the modernity of a figure-hugging spacesuit with barbaric fur elements. I think blue is a fine color for blondes so I kept it. I added a wolfish gray for the fur pieces. The clasp on the cape is a stylized "A" which intentionally harkens back to Aquaman's belt buckle. And the hard-edged "Lorna Dane" headpiece is softened by his bushy goatee and his tousled shock of hair.

Footnote: Yes, I realize that the loincloth violates my "no overpants" rule. I made an exception because -- unlike every other example out there -- it strengthens an underlying concept instead of just being superfluous. Okay, enough blather. I hope you all like it!
Posted by Jeremy Rizza at 7:15 PM 4 comments:

As rejected Legion applicants go, Fire Lad actually has some decent powers, and they make for a neat visual; he breathes fire. The Legion turned him down because his power was "too dangerous and might cause accidental holocausts." I think that was just a nice way of telling him his costume sucked. 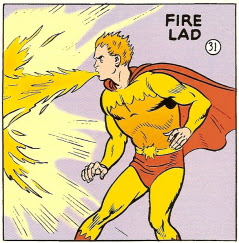 Designed by the Archduke of Squares, John Forte, Firelad's duds hit the viewer over the head with a "FIRE!!!" theme, including a fireball belt buckle that looks more like a pretty yellow carnation. My suggestion: dial that shit back a notch. Or two! 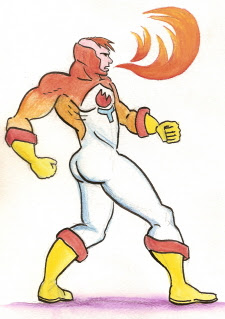 I've balanced out all that yellow, orange, and red with an equal amount of cool white. And I designed a nice, graphic torch symbol for him. I also like the contrast of the head-wrapping cowl and the punky haircut. It's an edgy look to go with his carnival sideshow powers.
Posted by Jeremy Rizza at 6:19 AM 7 comments:

Last Thursday's "supersized" episode of "The Office" finally brought the Stamford staff into the Scranton office. For me, the happiest surprise of the night was the blossoming of Ed Helms' Andy Bernard into one of the best characters on the show. At Stamford, Andy was mainly a pathetic annoyance, with alternating bouts of a capella singing and temper tantrums. ("The game is over... I'm going to kill you for real," he tells Jim, after Jim's woeful performance in a "team-building" office video game.) His manager Josh seemed to ignore Andy's attempts to score brownie points. At Scranton, however, Andy immediately ingratiates himself to the clueless Michael through "personality mirroring" and "name repetition." And his aggressive personality has put him at odds with heirarchy-conscious Dwight, who shares his refusal to be the first person to "break off a handshake." Thus, when the two meet and quickly run out of things to say to each other, they wind up just standing there, still vigorously shaking hands. In fact, the demented duo clashes continuously throughout the episode. Andy even charms Dwight's frosty secret squeeze Angela. Noting her love of cats and costumed babies, he wins her good will in one fell swoop by selecting as his new screensaver a photo of a kitten wearing a pink cowboy hat. I anticipate a battle royale between Andy and Dwight over the coming weeks. In fact, the handshake scene inspired me to draw a cartoon of the two combatants. Initially it was just going to be a simple caricature, but the singular shape of Ed Helms' cranium led me to recast the duo as those legendary foes, Frankenstein's monster and the Wolfman. 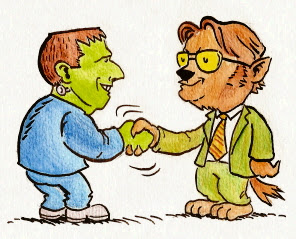 Hey, speaking of flattened noggins, today I watched Trent Green (who only a few months ago suffered a concussion that turned his skull into a Lotto tumbler) return as KC's starting quarterback in the Chiefs/Raiders game.