Doctor Strange:Master of the Pimpin' Arts

In "Doctor Strange" #52 (April 1982) the title hero demonstrates many times over why he's Earth's Clotheshorse Supreme.

By the bilious bowels of Bill Blass! Doc looks aces in this classy three-piece number sans coat, with the top two buttons undone and the sleeves rolled up for a touch of sexfulness. In lieu of a tie, Strange has accessorized with a stethoscope which can be yanked dramatically from the neck whilst ordering people about. In fact, the whole thing's so sexful that it's aroused him! And there's only one way to satiate his urge: "Hello, Wong. There is an emergency here..."

But of course that's not the ensemble Doctor Strange is famous for. 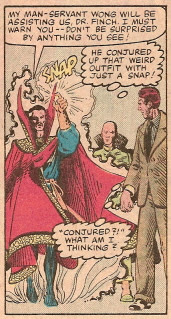 Hey, what's the big deal? I can conjure up a weird outfit with just a snap too. Anyway, I've always liked Doc's costume, even if it makes him look like a cross between Ming the Merciless and a ballerina. Now let's see how he dresses for... oh, let's say 15th century Spain. 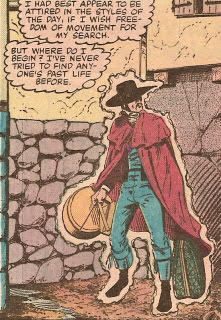 Suh-WEET! I love those two-layer cloaks. It's why I used one for my He-Looker design. And of course he brought along some boxes for his extra hats. Right? I mean, that's what I'd do.

I think he looks terrific. Like a bad-ass Pilgrim. ("Charles Bronson is Myles Standish in "Thanksgiving, Bloody Thanksgiving!") I'd love to see him in a steel cage match with Solomon Kane. Let's get that hat off his head and see how he styled his hair. 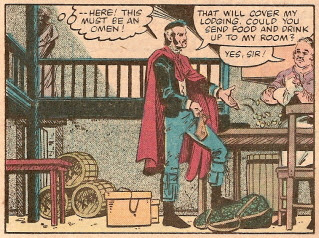 Also, it's hard to tell from this panel but Doc's wearing his hair longer and he's tied it back in a little ponytail. Like, a dinky one. Three inches at most. Like Patrick Swayze. So that part's kind of lame. But the muttonchops more than make up for it.

Y'know, that hat looks awfully familiar. Hey, Doc! Put it back on so I can get a better look at it. And spin around a few times. Really work it. 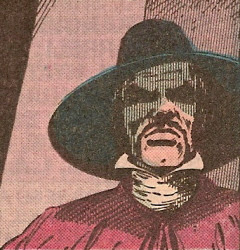 A-ha! Now I remember. Looks like Doc's all gussied up for breakfast. At Tiffany's.
Posted by Jeremy Rizza at 5:49 AM 5 comments:

In "Iron Man" #188 (November 1984) two brothers buy a delapidated old theater "in a certain section of Los Angeles" with plans to turn it into a sleek, modern porn-o-plex. One of them discovers a pair of weird costumes in the back. Naturally, he tries one on and does a little fashion show for his brother. ...This is starting to sound a lot like amateur incest-fetish fiction, isn't it? Don't worry; it's only Denny O'Neil. (Huh. I still feel a little queasy.)

The brothers are named Grimes, but by a Silver Age-y coincidence, the costumes used to belong to the old Spider-Woman villains, the Brothers Grimm. And the tacky duds, while not exactly fabulous, are magic. 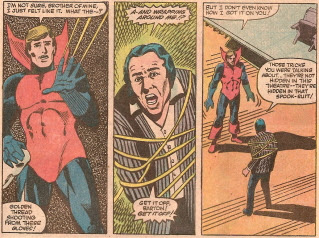 Enough with the shouting already! Jeebus! Who knew Jim Belushi was such a little bitch? Oh, and "I don't even know how I got it on you?" I've heard that excuse before. From Calamity King, after an unfortunate "spooning accident" we had while on a camping trip to Olympus Mons. And then our blanket turned out to be Ronn-Kar. *shudder*

The Grimes are investors in real estate, so they decide to use the Grimm costumes to take revenge on a man who beat them out of a high-end property -- a restaurant. 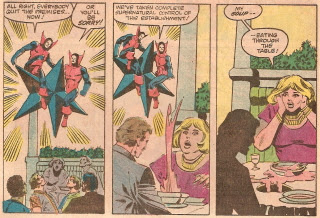 "My soup-- eating through the table!" Yeah, like she was only going to eat soup. (Meow! I know; I'm an asswipe. But you must admit I wear it well.) If I were her I'd be more concerned about her dinner companion's shadow suddenly devouring his entire body, but yeah, soup is important. Also, she had the bad fortune to go there during a "Top Chef" Restaurant Wars challenge, so the soup would have had the properties of hydrochloric acid anyway. (Michael, pack your knives and go. And take those little turds Marcel and Ilan with you, m'kay?) 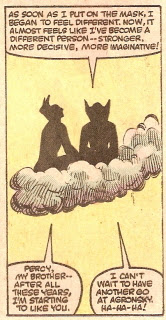 I know what he means about the mask. I have some argyle socks that make me feel the same way.

The last panel of this issue is meant to show that the Iron Man helmet is seriously screwing up James Rhodes' brain, because no superhero in all of comicdom would ever, under any conditions, think this: 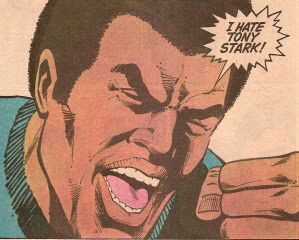 Grampa in a Bottle

In "Marvel Team-Up" #77 (January 1979) belly shirt-wearin' oldster Silver Dagger escapes from the mystic orb that had imprisoned him and goes on a full-tilt rampage against Spider-Man and Ms. Marvel... Claremont style! Yup, it's a Chris Claremont script so it's a given that Silver Dagger will be supremely powerful. But to quantify it further, even his armpits project rays of eldritch energy.

The battle of the century: Spider-Man versus b.o.! Although I must take issue with Silver Dagger's ensemble. A belly shirt? Kinda girly. In fact, completely girly. And the no-sleeves thing combined with the big round plate on the chest makes me think he raided Moonstone's closet for this get-up. I'll give him points for the bitchin' white mustache -- almost as nice as mine! Almost. But I have to take those points back off again for the Stephen Wright haircut. There's nothing wrong with male-pattern baldness but you don't gotta flaunt it. Honestly, he looks like Bozo the Clown's abusive uncle.

Elsewhere in this issue, Doctor Strange's girlfriend Clea is transformed into a being of pure strawberry jam.

Told you it was a Claremont story!
Posted by Jeremy Rizza at 4:46 AM 3 comments:

Does Whatever a Buckle Can

In "The Spectacular Spider-Man" #32 (July 1979) the hero probes the "House of Darkness" with a light mounted just above his crotch. 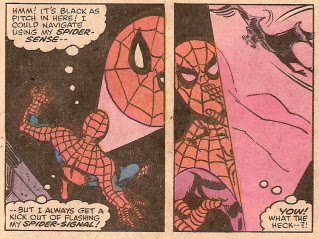 Yes, who doesn't enjoy projecting an image of their own face from their belt buckle? (I also have one of those Phantom-style rings that permanently imprints a goggles-wearing skull on a guy's ass cheek -- er, I mean, "forehead." 'Cause I'm two-fisted! Um. Well, you know what I mean.)

Wow, fifteen feet away and the image is still crisp. I wonder how he controls that thing. If it's like mine, then his right ball works the brightness level, his left ball operates the focus, and his dick is the zoom. (The dick is always the zoom.)

Fun fact: I have this idea for a "spotlight dance" belt buckle that combines the spider-signal with a "dance ray" utilizing the rare element Tarantellium. Just train the light on a bad guy and shout out a dance style (like the Hustle or the Shurg) and they have to do it. It would be a great gizmo for a hero with a name like "Captain American Bandstand" or "The Soul Trainer" or maybe a super-group called "The Party Machine with Nia People." I've got a prototype model but so far all it does is cause dangerous epileptic seizures and severe retinal damage. (Again, Jeremy, I apologize.) 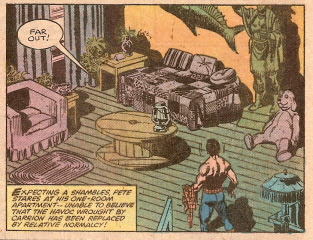 Extreme Makeover: Hovel Edition! Okay, how is this not a shambles? For reals. It's a rusted tricycle and two commemorative spoons away from qualifying as a flea market.
Posted by Jeremy Rizza at 5:37 AM 4 comments:

(Thank you, Babel Fish! Even with your dubious accuracy!) Dorian wrote a terrific post last week about the porn-star posing of the original Huntress. The poor lass just couldn't cinch up her robe! And then I remembered that Jeremy has a comic featuring that version of the Huntress. Only it's in German. 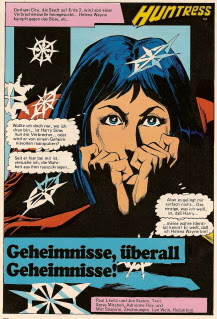 On the splash page, the Huntress is under attack by Japanese throwing stars but she's too busy trying to decide what to order for lunch to really notice them. Okay, so it's really Joe Staton's idea of snowflakes. But they sure look like they'd do some damage. Imagine these babies in the Peanuts Christmas special. Especially when they land on some kid's tongue. 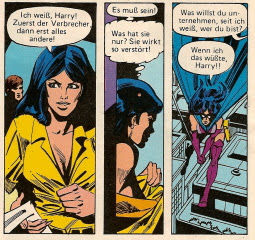 Looks like she's having a panic attack. "Trapped! Trapped! Must... remove... blouse!" What? Don't ladies always pull shirts taut against their bosoms just prior to removing them? Seriously, I have no idea. Help me out here.

Of course, it's never a Joe Staton Huntress story without some robe action! Perverts, you may want to close the curtains or blinds or at least make sure there's nobody in an adjacent cubicle. And don't forget to wash your hands afterwards. 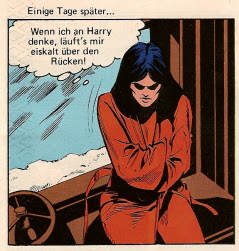 Oh yeah, baby, work it like-- what th'? She's wearing a robe because she's actually cold?! Well, that's kind of a rip-off. There's not even any cleavage! Except... that center "crease" looks a little suspicious. Eureka! Oh, Coloring Error, you're the FCC of the comics world!

Still, the robe is covering more of her than it usually does. It must be awfully cold outside. (The ninjas refrigerated their thowing stars beforehand, I guess.) How cold is it, you ask? 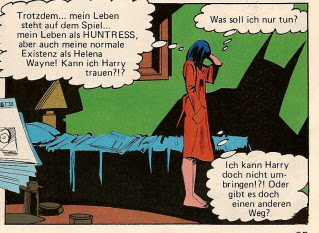 It's so cold that her nipples are creating the "ears" on that Bat-shadow.

And that is freakin' cold, my friends.
Posted by Jeremy Rizza at 5:46 AM 3 comments: