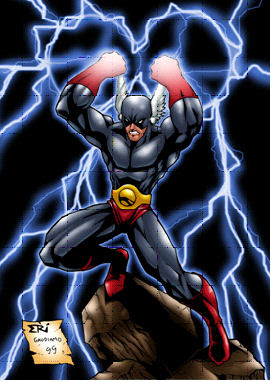 Here's the Indonesian super-hero, "Gundala", and as you can see, he's pretty goddamned kick-ass.

Sure, his origin is a bit goofy. But what super-hero's origin isn't, somehow? In brief, he was a scientist named "Sancaka", and he was working on an "anti-lightning strike serum." Whatever the hell that means. Did it heal folks who had been struck by lightning? Or did it make people immune to lightning strikes? And if that's the case, did it somehow neutralize electrical impulses within the body? 'Cause that would kill your brain! So probably not that. Anyway, he was in the lab when his girlfriend broke up with him. He lost his shit, and ran outside, smack into the middle of an electrical storm. (Ironic!) And then he was -- you guessed it -- struck by lightning. This had the surprising effect of transporting him to Lightning Land, which I'm pretty sure is a level in a Nintendo game. The king of Lightning Land, Kronz (or "the Kronz", as I like to call him) adopted Sancaka as his son and military commander, and renamed him "Gundala." Which seems awfully forward to me. Even I wouldn't do anything like that, and I'm so pushy, it borders on sociopathic! Admittedly, I've contemplated "adopting and renaming" Gadfly Lad. But his girlfriend probably wouldn't appreciate that.

"The Kronz" ordered Sancaka to attack "Cloud Land", a.k.a. Seattle, Washington. After that, Gundala had all kinds of adventures, both on an alien planet and back on Earth. Not a bad life, if you ask me.

The above image shows off Gundala to best effect, with some sweet giant wings on his cowl. He looked slightly less kick-ass in his own comic, circa 1969: 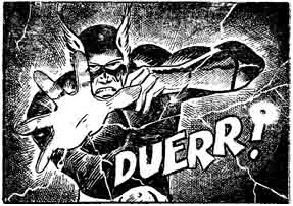 Dinky, timid wings. Is there anything more pathetic? Still, he's workin' the "bastard face", so that helps keep his kick-ass factor out of the toilet. And you know what? He was so popular, they made a movie about him! Let's take a look! 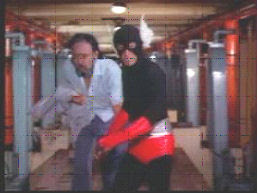 Ye gods. Kick-ass factor: negative 50 points! Remember those days, aging nerds? When you could get cast as a super-hero, even if you had the body shape of a super-hero fan? Those were dark times, my friends. Thank goodness for the advent of male body image disorders, huh?
Posted by Jeremy Rizza at 12:39 PM 12 comments:

Tie Me Angry Dude Down 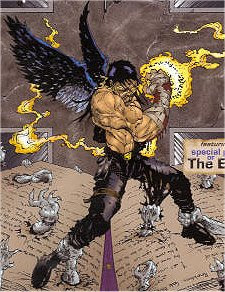 The Australian hero, "Blackwing"...
Posted by Jeremy Rizza at 5:58 AM 7 comments: 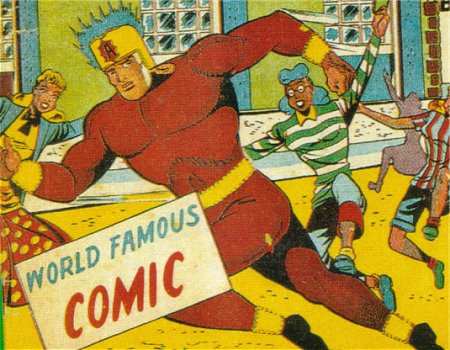 No, the first one. From Australia!

Wow, this is turning into a theme, isn't it? Another Australian hero, another flamboyant hat, another sad effort at hiding a boner with some prop -- in this case, a hyperbolic "blurb box". I know that Australian men are uber-butch and all, but what the hell?! Do they all have boners, 24-7? On second thought, don't answer that. On third thought, please do. And be sure to support your argument with photographs.

I don't know what Captain Atom's deal is. I presume he's atomic-powered. One thing I know for sure is that his hat is dopey-looking and on fire. That explains why all those teenage girls are taunting him, and why he's running around like a rabid dingo. Seriously, how do you piss off somebody so badly that they set fire to your hat? And the fact that the flames are blue indicates that the afflicted haberdashery is hotter than hell. What did they use as fuel? Phosphorus? That is some serious anger, folks. Is Captain Atom the victim of a really bad breakup? Or is he just a total rat-bastard summumabitch? If it's the latter, maybe this thing happens to him all the time. At any rate, he's certainly taking it well. Of course, if you're enough of a bad-ass to rivet your clothing to your body, a little flaming hat isn't going to make you lose your cool.

Final verdict: stupid costume, but it's worn by a hard-core Aussie manly-man. You tell him to take it off. ...On second thought, allow me. *winks lasciviously*
Posted by Jeremy Rizza at 6:50 AM 7 comments:

And By "Flame World", They Mean "Styling Salon" 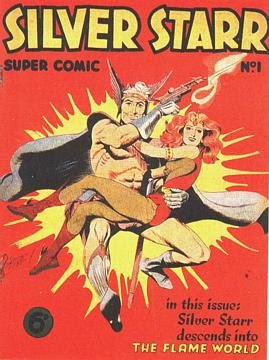 To be frank, I'm kind of digging on his outfit. Especially the winged sweatband or whatever that thing is. And his hair is prematurely silver...! Heavenly... just heavenly. The only thing I'd add is a beard. But as you can see, he already has one... and he's holding her right in front of his crotch. Subtle! I'm sure Tom Cruise would do that with Katie, if he had the upper body strength. It doesn't matter, though, does it? Silver Starr could charge into battle while dry-humping his comely sidekick, and it still wouldn't keep him from "descending into the Flame World."
Posted by Jeremy Rizza at 6:40 AM 8 comments:

...But His First Love is the Ballet. 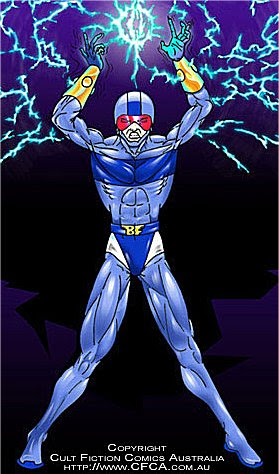 The Australian super-hero, "Blueflyer"...
Posted by Jeremy Rizza at 6:58 AM 10 comments: