Once More, With Follicles 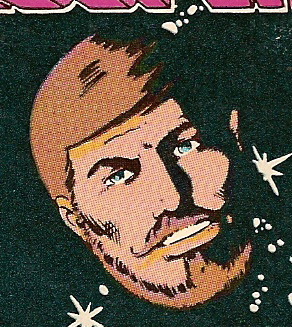 Star Boy freaks out over Darkling's unbridled sexfulness: take two! By special kind-of-request by Bill S., I have a whole passel of alternate reaction shots, not by the timid and beardless mid-teens Star Boy, but by the confident and slobber-worthy bearded late-teens/early-twenties Star Boy! (I'm not sure how old he is in these. Damn sliding timeline!) Sadly, only the above picture features his mustache in handsome "handlebar mode." 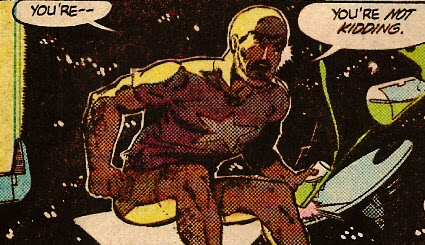 Stage two: Imagines doing the horizontal Shurg with Darkling. And then with both Darkling and current girlfriend, Dream Girl. 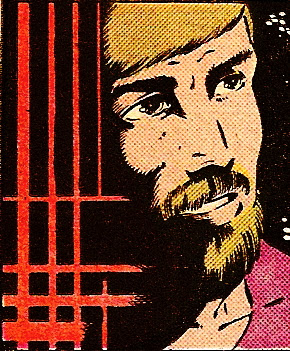 Stage three: Realizes was talking aloud about stage two. Ignores catty comment from friend who doesn't even have his own penis. I mean, seriously. What the hell?! Cram it, space-eunuch!

Stage four: Logical portion of brain held down and mercilessly pummeled by own horniness. 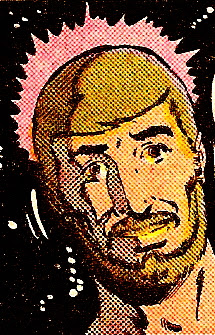 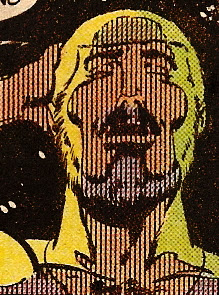 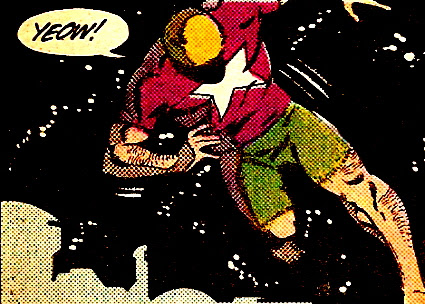 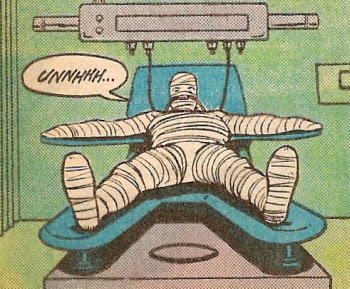 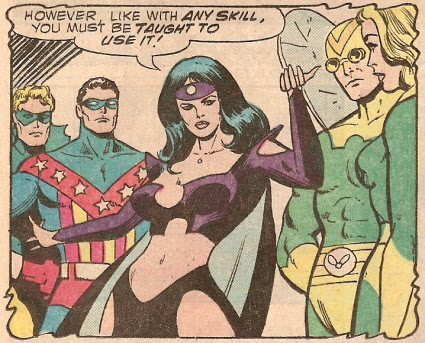 In "The Mighty Crusaders" #10 (Archie Comics, December 1984), Darkling explains how it took years of practicing in a remote dojo before she could "work it" without inadvertently killing somebody. It's like kung fu!

Hey, Star Boy! You're into curvy dames. How do ya like them tomatoes? 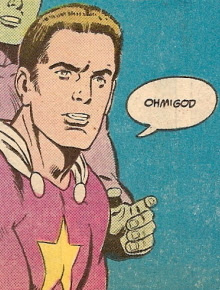 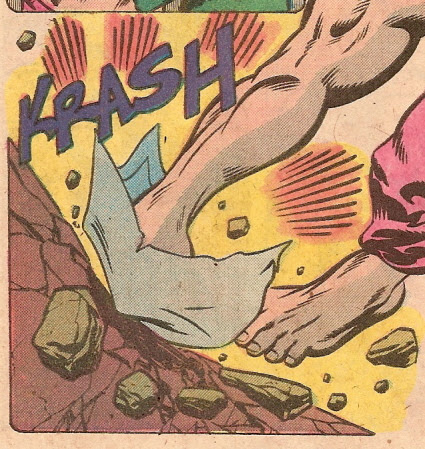 But wait! How did General Angst get Tub to finally go batshit over Batman? For the answer, we'll have to move northeast on the page. Because Young Don Newton had an annoying habit of playing "pin the tail on the donkey" with his panels. 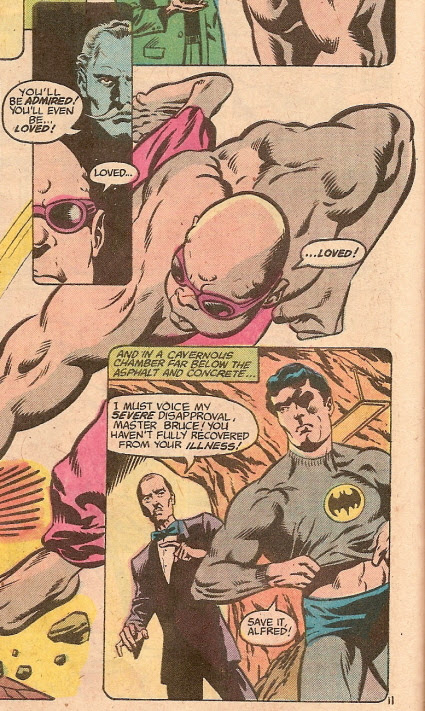 In the upper left-hand corner, we have Tub and General Angst reenacting half of a Beatles album cover, or maybe they're in a Bergman film. Next to that we have a dynamic shot of Tub, The Mortal Plastic Fist, letting fly with a plastic-reinforced, severed-nerve-trunked haymaker. (And say what you will about Tub's dopey mug, I think he has a pretty mouth. A real pretty mouth.)

And in the lower right-hand corner, Alfred's had no luck with his attempts to keep Batman entertained, which include playing "air piano" and wearing a big novelty bow-tie -- that spins! Nope, even though Batman's mysterious illness -- a syphilis-style STD caught from a dalliance with Doctor Double X -- has eaten away at his left eyeball, he's still going out to battle crime. And sure, he'll end up flying the Batplane around and around in a big circle, and he'll crash into walls and gargoyles and giant props and shit. But at least it's better than watching Alfred perform "Crocodile Rock" for the seventeenth time.
Posted by Jeremy Rizza at 5:52 AM 7 comments: 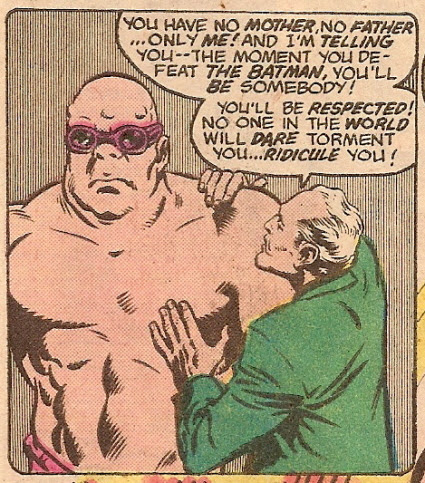 [Fade in on the cavernous and sparsely-populated headquarters of "Mercenaries, Incorporated." Tub stands,facing a glossy 8x12 "glamor shot" of Batman, while General Angst and Doctor Moon watch Tub.]

Tub [points at photo]: But I don't hate him!

[General Angst nods at Doctor Moon. Doctor Moon silently moves across the room and pulls a giant lever. In response, the bland fluorescent lighting of "Mercenaries, Incorporated" dims, and is replaced by a slowly spinning kaleidoscope of lights, with a blue-white spotlight falling on General Angst. Music rises in the background.]

[The music rises to a crescendo, and then it fades. The lighting returns to normal.]

Tub [looks up from a calculator he'd been playing with]: Oh, I'm sorry. Were you talking to me? 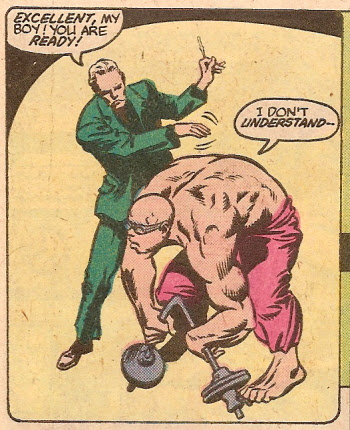 "You don't have to understand! Just let me climb up on your back!" 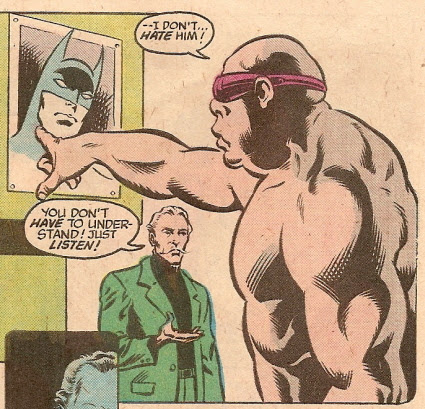 So there are glossy pin-up photos of Batman circulating about Gotham, Old-Enough-To-Know-Better Denny O'Neil? Really? (You can't tell just by reading this, but my face looks so sarcastic and imperious and shit right now. In fact, some random dude passing by my window glanced at me and he immediately looked all humiliated and ashamed, plus I'm pretty sure he popped a boner.)

Where did General Angst even get that photo? Did he go through Vicki Vale's garbage? Did he order it from an ad in the back of "Tiger Beat" or the super-heroic equivalent thereof? Is it autographed? Did Batman advise General Angst to "reach for the stars (or else)"? Did he dot every "i" with a little bat? Did he slather on some lipstick (Revlon's "Noirish Night", which is a bloody crimson with an undertone of royal purple) and give the photo a big sloppy kiss?

Or did he make Robin do that?
Posted by Jeremy Rizza at 5:27 AM 2 comments: 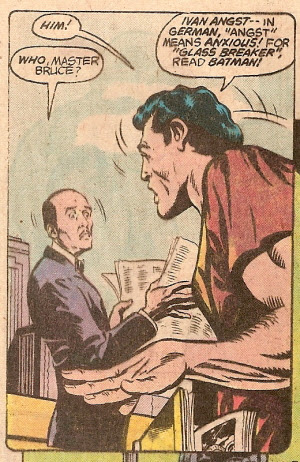 What is he doing with his hand?! 'Cause I'm pretty sure only Doctor Strange and Spider-Man can hold their fingers like that. Is Steve Ditko pitching in on the art chores, all of a sudden?

Or maybe this is the first symptom of "bone-itis." 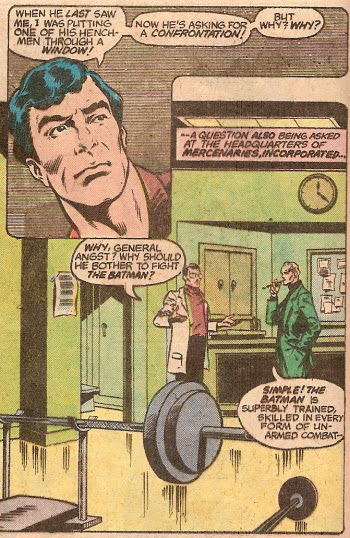 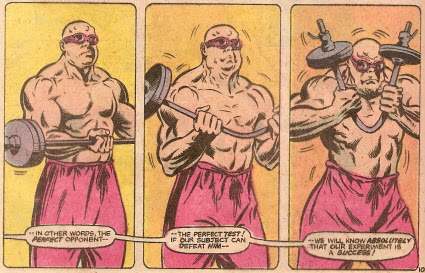 Er, alrighty. So... no barbells. Well, maybe Tub can get his exercise by carrying General Angst around on his back.

Which may have been Angst's plan all along.
Posted by Jeremy Rizza at 6:46 AM 8 comments: