In the moral realignment challenge, I imagine how a hero would dress if he were a villain, and vice-versa. Way, way back on July 10th, Big Head Boy suggested I morally realign the Teen Titans and the Fearsome Five, "80s STYLE!!!" It took me over seven months, but I'm finally ready to meet him halfway! How's that for commitment? I'll do entries for every member of the Fearsome Five -- which is way more than five, by the way -- and an equal number of opposing Titans. I just would rather not do them in a 1980's style -- and especially not like the 80's era George Perez. I mean, the man is a storytelling genius and a true craftsman, but back in the 80's his costume designs were a bit... much.

So, here's an index entry from the "Fearless Fortress" website on Earth-AAA: 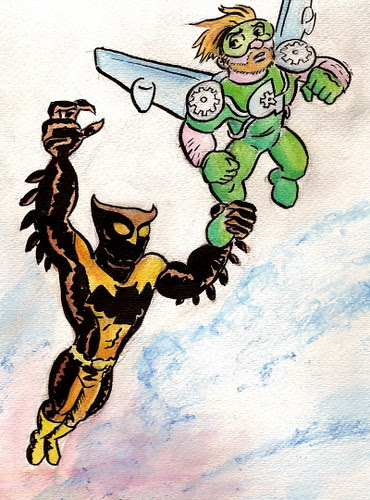 Best of DC (Gold Star Digest) #18 [1981]: This DC Digest contained mostly reprints of Fearless Five comics from the 60's and 70's. It also offered a full-length Gizmo solo story called "Breakup!" Written by Marv Wolfman with art by Carmine Infantino. Gizmo's romantic troubles continue as his on-again, off-again girlfriend Komand'r dumps him for Dick Grayson, a dashing aerialist. Meanwhile, Gizmo is frustrated by his inability to stop Nightwing, an owlish burlgar, from pulling off a series of highrise art thefts. Gizmo finally learns more than he bargained for about the criminal. Not only is Nightwing in reality Dick Grayson, but Dick Grayson is Gizmo's old nemesis from the Teen Tyrants: the Robin. First appearance of the Robin as Nightwing. Origin of the Robin/Nightwing. Reprinted stories: "The Fearless Five!" from "The Good & the Gallant" #54 [1964] by Bob Haney and Bruno Premiani [the team's debut], "A Royal Pain" from "Fearless Five" #17 [1968] by Bob Haney, and Nick Cardy [second appearance of the Reasonable Rocker], "Men Call Her... Eve!" from "Fearless Five" #25 (1970) by Bob Haney, Gil Kane, and Nick Cardy [first appearances of Eve Cloud and Mister Zeus], and "Wrongs Over Europe" from "Fearless Five" #46 [1977] by Bob Rozakis, Irv Novick, and Joe Giella [second appearance of the Flops, first appearance of Batman's Daughter].

...Yes, the "evil" version of Nightwing looks kind of like Batman. I already knew I wanted to go with an owl theme for him, and it worked out nicely that the horned owl's silhouette was similar to a bat's. The hard part for me was devising something that didn't look exactly like Batman's costume, and didn't look too much like Owlman's or even Nighthawk's. It probably looks most like Nightowl (from "Watchmen"). I covered the entirety of Nightwing's face to make him more menacing and ninja-like. The feather-like appendages on the sleeves are an homage to Batman's stylized gloves, but I ran Nightwing's all the way up the arms. This is partly in lieu of a cape. I've done bird-themed costumes with capes before, and I didn't want to repeat myself. Plus, I liked the way this costume looked without one.

Gizmo has traditionally been very covered up -- even his head didn't have much flesh exposed, what with the hood and the goggles and the big bushy beard. (His "Outsiders" appearances, with the goofball fu-manchu and braided goatee and the shaved head was not an improvement.) The Bizarro version of Gizmo had to be more accessible for a young audience, so I made him look more youthful. I kept the beard but I lightened it and trimmed it quite a bit. I figured he still needed goggles, but I swapped out his old ones for a style that exposes his eyes. And I adorned his formerly bald pate with a thick mop of hair. I also got rid of the character's pot belly -- which I only noticed in the recent version with the switch from a baggy jumpsuit to skintight Lycra. Honestly, Gizmo, do you know nothing about hiding your figure flaws? (If I had my 'druthers, I'd put Colossal Boy in a tasteful kurta and some genie pants. You heard me, Gim -- if I want to see a flabby man in a cowboy costume, I'll travel back to 21st-century Wichita, a-thank you very much.)
Posted by Jeremy Rizza at 7:11 AM 7 comments: