In a comment to my previous post, Jonathan expressed disappointment that I didn't go with my original plan of depicting the gender-reversed Starfire with a giant beard and no hair. "I'm just a-fixated on that giant flying beard," he wrote.

Me too, Jonathan. Which is why I thought I'd show everybody exactly why I didn't draw him that way. Here's Starfire Dude flyin' around, his gargantuan beard leaving a visible trail in his wake: 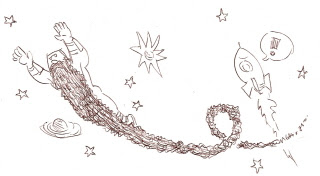 How do I feel when I see a beard like that? Like my heart has been touched by Christ... and he finger-banged my aortic valve! But I'm in the vast minority here. And besides, a beard so utterly colossal makes a costume pointless. That's why I only gave him boots and wrist-guards. Yeah, that's the reason. *nervously avoids your gaze*

Now let's see him from above: 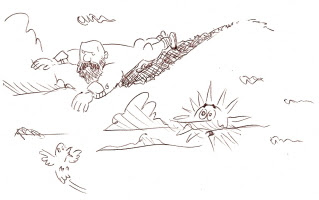 Oh, Starfire Dude--! You're scaring the local fauna! Knock it off this instant!

...Hmm. He spends a lot of time in the gym! Mostly in the showers. (Conditioning his beard! Why, what were you thinking?)

Mammothly-bearded Starfire faces persecution from the general public and his teammates alike! Watch out for that famous Tamaranian temper, She-borg! 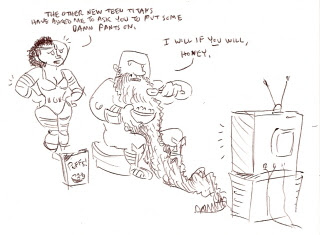 But at heart, he's not a fighter. He's a lover!

Aw! Jonathan, he likes you! Or maybe he's referring to Jon the Intergalactic Gladiator. Well, I'd advise either of you gentlemen to take care sailing into those romantic waters. You'd be something like Starfire Dude's fourth fiance and third husband! Where are the other two husbands right now? I'm not sure, but it wouldn't surprise me to learn that they're both trapped somewhere inside that beard... it's like a pitcher plant!
Posted by Jeremy Rizza at 6:37 AM 11 comments:

Before I get to the main part of the post, I have some good news and some bad news -- not affecting this blog one whit, so you can cut the hysterics. Honestly, you're more Pavlovian than the "Dancing with the Stars" audience! Quit yer bawlin'! ...Aw, heck, I'm lashing out at my audience again. I'm sorry! I think I'm having a meltdown! No, wait... that's just my robo-dingus. Hang on while I replenish the radiator fluid. Yeow! Too hot! Shoulda worn gloves! Or at least a condom! Gimme a sec...

...Aaand I'm back. Sizzling comets, what was I about to say?! Oh yeah! The good news: frequent commenter and all-around cool guy Jon the Intergalactic Gladiator invited me to participate in his group blog contest thingie, Last Gladiator Standing 2. That's where the elite invite-only crowd is divided into two teams and each week they individually write posts "in character" with predetermined story elements. After that, an independent judge (not Jon) picks the best post. That person's team wins for the week. The losing team has to e-mail Jon with the name of the person on their team they want to get rid of. (Do you see where I'm headed with the "bad news" part?) Yup, the bad news: I was the first guy voted off the island/boardroom/house/dance floor. Which, if you're a Shear Genius fan, makes me Paul-Jean -- or if your taste runs more toward "Dancing with the Stars", makes me Tucker Carlson. (Never thought I'd say that!) And no, changing that reference to Paulina Porizkova doesn't help. But I appreciate the thought.

Okay, let's get down to "bidness" as the ancient Mayans used to say. Last week I showed you how I imagined Starfire would look if she was evil. This week I'll show you how I envision Starfire, the hot extraterrestrial dude. And boy howdy, was it a tough challenge! 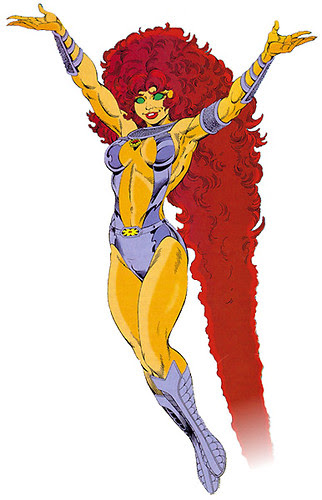 The art is obviously by Tom Grummett, but the design is pure Perez. Check it! We're talking early 80's George Perez at his finest right here: segmented boots, floral amulets, alligator-skin wrist guards, and a carnivorous perm. That hair-do could have headlined its own comic! Its arch-nemesis: one of those scores of disembodied mounds of straight black Japanese hair that one finds everywhere in manga and J-horror films -- and it would be a ninja, natch. Say! Why am I goin' on like this? I suspect most of you aren't even looking at Starfire's head, much less her hair. Yes indeedy, Starfire's astounding orange rack (doubtless covered with a short soft fuzz, like a peach) and the scientifically improbable way those thin purple strips keep in it check are the main reasons I even brought her up in the first place. Starfire's appearance is undoubtedly, whole-heartedly, in-your-face and poke-your-eyes-out feminine. Now, how can I transmogrify that into something suitable for a male hero? 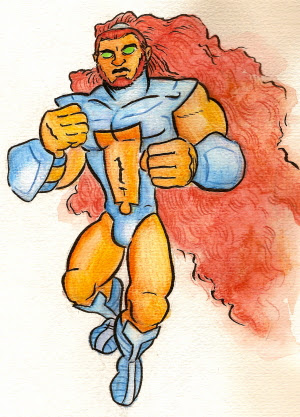 I really, really, really wanted to give the male Starfire a ginormous Tamaranian beard like some of the "real" Starfire's relatives had (and a shaven pate for contrast). So why didn't I? For one, it would have obscured the costume. (And I didn't want to repeat myself by making the shape of the beard substitute for a costume element.) Secondly, I wanted to preserve the idea that it left a trail while Starfire flew around, and even I had to admit that a "beard trail" would have looked freakin' goofy. And thirdly, it wouldn't have read as "young" as I wanted. My compromise was to pull the hair back in a Samurai ponytail deal and let it flow from there. I coupled it with a modest Donegal beard because I wanted to make him look more leonine. (Starfire's people are descended from a feline species, after all.)

Costume-wise, the biggest alteration was in the color. Not that a guy couldn't rock a purple outfit -- I've designed plenty of them -- but in Starfire's case, the hue didn't exactly scream "bad-ass warrior." So I shifted it down the spectrum slightly, to blue. I didn't have to change the boots or the wrist guards. I did remove the texture from the wrist guards because I figured it was more masculine to have a simpler, more graphic costume. I also ditched the two bejeweled amulets, although I left a cut-out down around the waist where it would have gone. I made the collar bigger so it covered the neck and the shoulders and I integrated it with the straps on the torso -- which I widened to create a vest.

Do I like it, personally? Eh, not bad. The size of the hair always has been and always will be ridiculous and clown-like to me, so that's a wash. The rest of it I'm pretty happy with. Starfire Dude looks like he could have come straight out of a Jim Starlin comic. He and Adam Warlock would fight and then team up... to do each other's hair!

You'll notice the art is more stylized than is normal for me. That's because I want to experiment with more expressionistic linework. I definitely think this guy looks more solid than my mannered "air guitar" Lionfang drawing from last summer (your time). The big difference: I didn't use any photo reference for Lionfang, whereas I did for Starfire Dude (just like I've been using for most of my drawings). That's one pic (of a bald guy!) for above the waist, another pic (naked, natch) for below the waist, and the face I just made up. Who knows what kind of kooky crap I'll come up with next week? Not me! See you then!