Late last night, a flying robo-messenger crashed through my bedroom window. Without a word, it dropped a bulky envelope onto my furry chest. And then, in typical Lallorian (i.e. crappy) fashion, it spun into the wall and exploded into its component parts. A small oil fire broke out. Cootie, bless her, doused the flames by urinating on them.

Turns out, the missive was from my old nemeses, the Blockade Boy Revenge Squad (or as I like to call them, "The Nancy Street Gang"). They had indeed slipped some kono juice inside my jello salad, as Bill S. and I had hypothesized. Not only that, but a Nancy Street Ganger had trailed after me with a camera, to make a journalistic record of any asinine behavior on my part. They claimed to have taken a whole passel of photos! As proof, they had enclosed a couple of samples. Including this one: 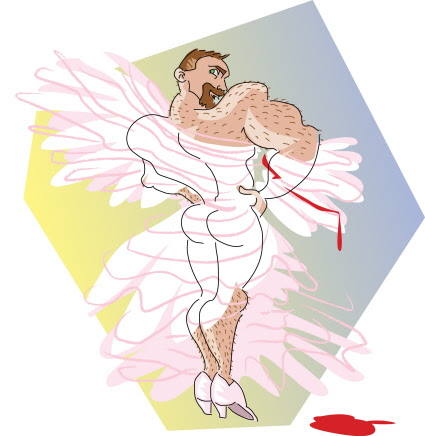 (I'd show you the ones taken from the front, but they're obscene.)

So, I'm giving a hearty, back-slapping "congratulations" to DOCTOR TECTONIC! The clever Doc rightly guessed that my juice-warped brain would gussy up my rude, hairy form in a Storm Boy original gown (the shoes were mine) and make a bee-line for the most conservative pub in the city.

The Revenge Squad wants me to wire them an entire wheel of space-cheddah, or else they'll upload all their photos to the Intergalactic Intraweb. As though I would be embarrassed by any of this. Screw that shit! I've always said, it's one sorry-ass Bear who's so insecure about his own masculinity that he's afraid to "get pretty" once in a while. And you know what? I think I worked that tulle gown! I'm like Ruby Keeler, only hot! And sure, the edges of the gown are razor-sharp, which is admittedly quelle butch, but you wouldn't know that until I got you in a sloppy-drunk Bear hug. That's why I'm uploading all the photos they sent me to the Intergalactic Intraweb, myself! Hell, here's a larger version of the above photo, just for you guys! I WIN, MOTHERFUCKERS! AGAIN! HAW! HA HA HA HA HA HA HA HA HA HA HA HA HA *inadvertently hiccups, then belches* HA HA HA HA HA HA HA...
Posted by Jeremy Rizza at 5:51 AM 11 comments:

"Attorney Thomas Troy was disbarred today, on the grounds that he is actually four eight-year-olds stacked up on top of one another, and disguised by a cartoonishly voluminous trenchcoat. Troy's coworkers first grew suspicious when they noticed the 16'3" Troy in the mens' room, urinating out of a hole in the knee of his trousers..."
Posted by Jeremy Rizza at 5:53 AM 12 comments: 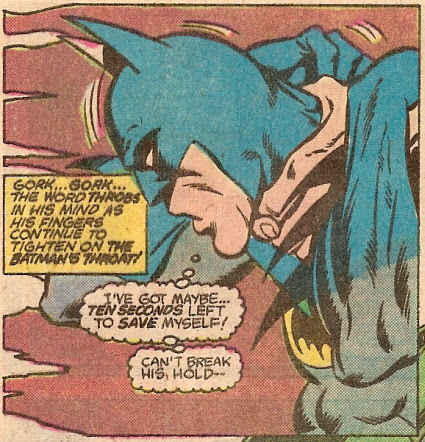 This kid, it's like, it don't take much to make him happy. Just sit his ass down on a bench, and like, give him, like, a calculator and an ice cream cone. He good. Like, he don't even push the buttons on the calculator or EAT THE DAMN ICE CREAM, he just SIT there, he-- *dissolves into giggles*

Okay, so let's say you're a skinny thirty-something cokehead or whatever, and you're hanging out with all of your thirty-something cokehead pals, and you -- I mean, there's nothing else to do, right, because you're all out of blow or whatever, so you decide to locate some dumbass to push around, you know what I'm saying? *eyes pop from skull* Are you gonna choose that five-foot-two weakling in the "Happy Days" t-shirt or whatever, or are you gonna, are you -- *gesticulates wildly* You want a challenge, you know what I mean? You pick the one dude who's as big as all you skinny cokehead douchebags combined, and you... urghlblurgh... eurgh... *stares helplessly at camera*

General Angst? Is my dream man? It's like, my fantasy? For a man to show up, out of the blue, and say, "I want to take you away with me? And have you live with me? And let me make you over into a superior being? And all I want from you? Is the occasional back rub.

Doctor Moon. A pioneer. Truly. His mother wanted him to be a dentist. But no. Because here was a man with a vision. And that vision was to hook up with a crazy old man in a Sherlock Holmes hat, and insert plastic into fat guys. *nods, solemnly* His name will never be forgotten. *breaks into toolish grin* ...Aw, shit. I forgot to be funny, again. Fuck it. Give me my paycheck.

Ah, Max's Bar and Grill, the finest dive in Lallor's famed "Paper Dollar City" (a stunning recreation of 20th century Milwaukee, constructed by an insane space-cheddah-billionaire for no good reason).

I remember this night. Kind of. I mean, I have some idea of what happened from a few clues:I just can't, for the life of me, remember what I was wearing to set off the whole incident. I know it wasn't one of my costumes. They were all at the sonic cleaners.

So help a dude out, okay? We'll do this in contest form. Describe my apparently shocking and/or kooky outfit for me. (Only one guess per person, please.) I'll post a picture of myself in the winning --er, I mean, "correct" ensemble -- on Friday. Sound cool? Thanks! You're the best.
Posted by Jeremy Rizza at 6:07 AM 16 comments:

"So, these two guys walk into a reservoir..."

It's not just a great start for a filthy joke; it's also a pithy summary of page twelve of "The Perfect Fighting Machine." Which wouldn't be so bad, if it wasn't a seventeen-page story.

The top third of the page: "Bye, Alfred! I'm goin' to the reservoir!"

The middle third of the page: "Here comes Batman! To the reservoir!"

The bottom third of the page: "And there goes our guy into the reservoir!"

You're right, Incredible Melting Alfred. He could've turned out like Green Arrow or Iron Man. "Better the douche you know," as they say.

Ugh... a floppy-rimmed Old Man Hat. Those things give me the willies. But then, so do floppy old-man willies.

And it looks like that "jacked-up mummy hand" disease has jumped from Alfred to General Angst. That pretty much confirms for me that it's an STD. 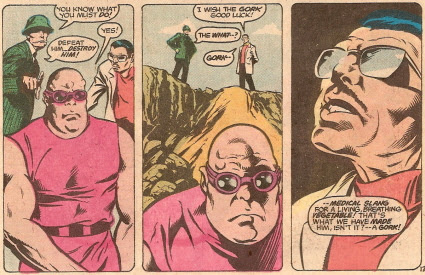 The hell with internal logic! Denny O'Neil learned a new medical term, and he's gonna insert it into the dialog if it takes a crowbar and a sledge hammer.

I mean, all Moon did was give Tub a little silicone enhancement and then have him work out twelve hours a day. If that turns a guy into a moron, then... oh.

Point taken.
Posted by Jeremy Rizza at 5:14 AM 3 comments:

Soles of the Damned

It's Batman vs. the Spook, in my dramatic reading of a scene from "Detective Comics" #435 (June-July, 1973). Thrill as the Dark Knight defeats the Ghost Who Walks (On the Ceiling) by... getting him to brag about his shoes? Then, brace yourselves for the twist ending!