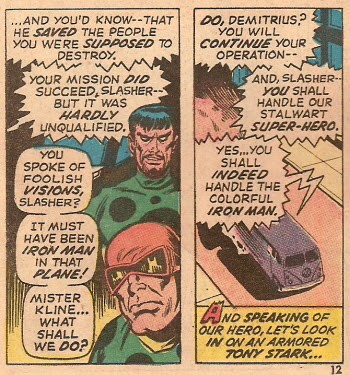 "First we take in a matinee of 'Follies' and then... antiquing!"

Young Gerry Conway's bloated dialog and caption boxes are like some medieval torture device, slowly and methodically crushing the artwork into a splintered, bloody pile. (If you cut out all the repetitious phrases the book would be about eight pages shorter.) I expect towards the end of this story the panels will consist of a few tiny specks surrounded on all sides by melodramatic prose. And on the last page, the artwork is condensed into a black hole, destroying any unlucky soul mad enough to read this four-color turd all the way through.
Posted by Jeremy Rizza at 12:27 PM 10 comments:

Hey, I just figured out who "Mister Kline" is, based on the way he talks: he's a gossip columnist! "A certain armor suited Avenger... was spotted stumbling down Broadway with a bottle of vodka -- and a straw! -- in each iron hand?" I bet he sounds exactly like Roddy McDowall.

Other juicy tidbits from Mister Kline's column in the Daily Bugle:

"Who is the seemingly-reserved Avenger who phased his hand through the chest of a sex shop employee who told him none of their vibrators were available in crimson?"

(And don't forget to check out my lastest mega-giganto-post at Next Top Hero!"
Posted by Jeremy Rizza at 5:49 AM 5 comments: Oh, for--! It's like they're two little kids, horsing around in the back of a station wagon. If they don't quit all that grab-assin', Lucie's gonna turn that van around and drive right back to Albania (or wherever the heck they're all from). If I were her I would have brought along one of those little travel versions of "Battleship" and perhaps some coloring books to keep them occupied. Or maybe they could all play the terrorist version of license plate BINGO. ("There's one from Florida!" *fires Stinger missile at the hapless motorist*)
Posted by Jeremy Rizza at 6:22 AM 7 comments: 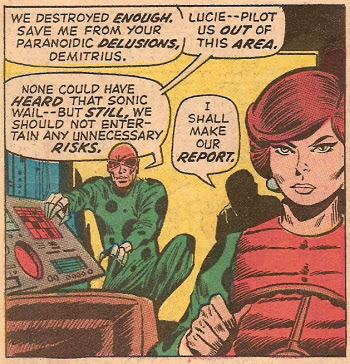 I mean, I know it's an actual word, but it just seems so... so Conway-esque, somehow. Kind of like how Slasher orders Lucie to "pilot" them "out of this area" when he means "take a left at the next stop light, and could we maybe stop at the DQ for an ice cream sammitch? Pleeeaase?"

And just who is this "Lucie" person? (Besides a hot rat-faced babe with shellacked hair and a love of down vests?) Did the mysterious Mister Kline assign her to the terrorist team with those two losers, or did the fancy-talkin' Slasher hook up with her in some terrorist singles bar (with Demitrius as his "wing man")? Or... in a more likely scenario, is she Demitrius and Slasher's mom? Because she does look a mite taut in the face, like she's a sassy senior who's had some work done. And Slasher is exactly the kind of douche who would call his mother by her first name.
Posted by Jeremy Rizza at 6:04 AM 7 comments:

Rectangular for a Reason 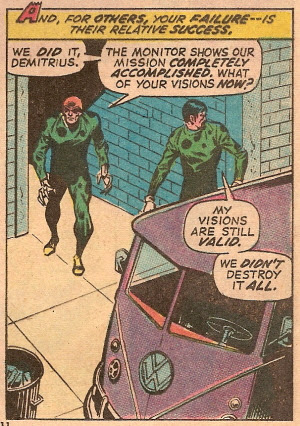 Their evil mission complete, the super-powered criminals slip into their high-tech transport and-- oh.

I kid you not, Slasher and Demitrius' getaway vehicle is a freaking VW van. (That's enough terrorism for today, guys... time to pick up the kids from soccer practice!) So I've got to agree with Young Gerry Conway on this: their success is awfully relative! Sure, they defeated Iron Man (with a lot of help from Iron Man's liver) and yet he's the one who'll be flying to the hospital in his own private jet while they're probably scurrying off to some rat hole in a crummy old van. I mean, for supervillains they're not exactly enjoying "the high life." Although Conway probably was, if you know what I mean and I think you do.

Fun fact: if this was a Gerry Conway comic from a mere three years later the Punisher would stroll around the corner and blast their fool heads off! (Life is all about timing, people!)
Posted by Jeremy Rizza at 5:45 PM 11 comments: 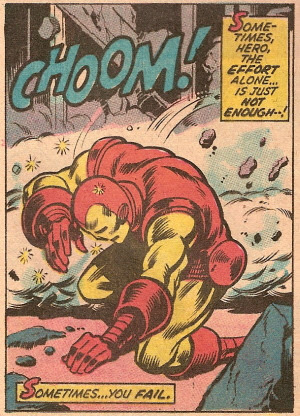 And if that wasn't bad enough, he's about to be smothered by a roiling cloud of his own word balloons! He can't win for losin'! Poor dope. And the final panel has him vomiting inside his own helmet. The End!

So. We had five whole panels of action, six if you count the one of him flying out of the plane, and it all comes to a whiplash-inducing halt with this panel where he passes out. After having saved... one person! But don't think for a moment that this story's frenetic pace is going to falter! No, you can all look forward to many, many panels of people driving places, people sitting and talking, people leaning against bedposts (fully clothed, darn it), and -- of course -- thinking, thinking, thinking! (You can thank me later.)
Posted by Jeremy Rizza at 6:09 AM 8 comments:

The Little Engineer Who Couldn't 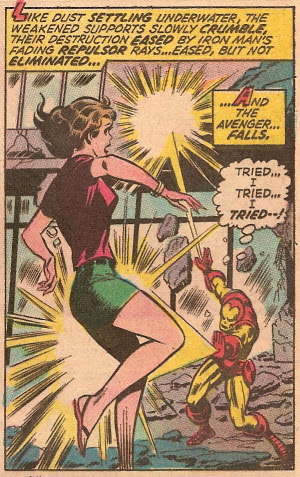 As for those "weakened supports", they were crumbling pretty goddamn slowly before Iron Man even got there, Young Gerry Conway. And I think the lovely young lady is gonna be mighty pissed once she figures out that Iron Man's repulsor rays have sanded off the bottom third of her feet.
Posted by Jeremy Rizza at 6:04 AM 2 comments: 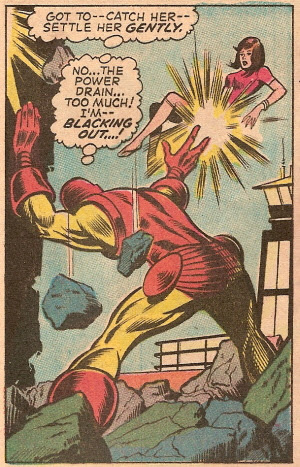 "No... falling civilian too leggy... rack too pert and alluring... must... concentrate... modulate repulsor rays... to cradle her... NOOOO!!! ...Her ass--! Too luscious--! Overpowering me! ...Must make her forget dillweed caveman boyfriend... fly her down to Bahamas for intimate weekend... coconut oils... edible bikinis... make love atop beached dolphin-- MUST CONCENTRATE ON SAVING LIVES! ...No good... aw, the hell with it... blacking out..."

Okay, Tony... the suit is losing power, but you're the one "blacking out." What is that, the "dog ate my homework" excuse for high-tech rummies?
Posted by Jeremy Rizza at 9:24 PM 7 comments:

Not the Worst Break-Up I've Ever Seen 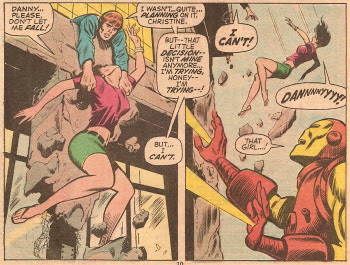 "That girl...! She's got one sweet caboose!" Snap out of it, Iron Man! Eyes on the prize. No, not that one. But yes, she is quite a shapely lass and I bet she's available now that she knows her boyfriend transforms into a sarcastic dillweed in times of crisis. (That's definitely the kind of thing you want to find out before marriage.) Also, judging from his face "Danny" is Moon Boy from the "Devil Dinosaur" comic, all growed up and waxed to high heaven! (Danny and Christine's first fight ended with him throwing his own feces at her.)
Posted by Jeremy Rizza at 5:50 AM 5 comments: 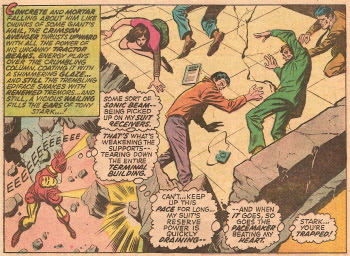 I'm pretty sure the "vicious wailing" that "still... fills the ears of Tony Stark" is Stark's own bottomless self-pity. Y'know, Tony Stark's self-pity is a lot like the tortilla chips and salsa they serve you at a bad Mexican restaurant: stale, slightly acidic, and constantly replenished.

And it's the very first panel of him doing anything and yet he "can't... keep up this pace for long"?! Holy balls. Didn't he remember to charge up the suit before he left home? Or was he too busy grooming his mustache and chest hair? (In which case I totally forgive him.)

As for the people on the "trembling edifice", I'm not even sure they're falling! I'm pretty sure some of them are floating, actually! The whole panel looks like a collage (or Colorforms), with people placed hither and thither at random and nobody casting a shadow to anchor them to any one spot. ...Hey, wait just a dad-burned minute! No shadows? Well, hell! They're all vampires, Iron Man! Let 'em fall!
Posted by Jeremy Rizza at 5:25 AM 4 comments:

Young Gerry Conway, would you care to tell everyone -- in sound-effect form -- just what you were on when you wrote this story? 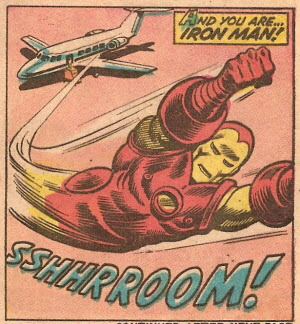 Yeah... that explains a lot.

I also see that the crumbling balcony that is "scant yards" away from the plane has now totally vanished. Or crumbled! I guess all we are really is just dust in the wind!
Posted by Jeremy Rizza at 6:33 AM 8 comments:

Always at the Party 'Cause the Chicas Think He's Bueno 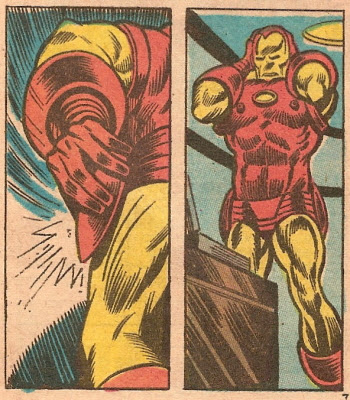 And now, the first two panels of a five-page sequence depicting Iron Man doing the Macarena.

(By the way, I effed up and skipped some panels so I had to retro-fit them into last Friday to keep the story from going out-of-order. My mighty heart is bursting with shame!)
Posted by Jeremy Rizza at 6:20 AM 3 comments:

You know why I never wear a cape? Because I wouldn't be able to stop myself from doing this with it, all day every day. For example, a typical conversation with a crew member would go something like...
Rainbow Girl: Captain, I need your approval on this revised duty roster.
Me: No problem! Just give me two minutes to knee-walk over there... *flap, flourish, twirl*