Remember when I said that the Enchantress' Suicide Squad costume was a tough one to translate into a male version? I found her Shadowpact costume even tougher. That's because it's another bustier/tiara combo. (Criminy, people! Enough already! How 'bout a nice tailored pant suit and a Pucci scarf?) To top it off, the costume also has capri pants, slippers, and fingerless opera gloves! To top that off? It's really, really boring. Say what you will about the giant witch hat, at least it had some personality and it was actually symbolic of the Enchantress' powers. The sorry ensemble she sports in the "Shadowpact" era is a warmed-over regurgitation of Storm, the Scarlet Witch, Marvel's Enchantress, and the White Queen, with a little "Shelly Winters in 'Lolita'" for spice. It's "I Dream of Jeanie" meets the Pussycat Dolls. Blech. Hey, let's get our heroine's reaction to the first time she saw her new get-up in a full-length mirror. 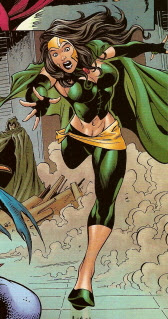 You can't run from ugly, Enchantress. But enough about her! What about me? (Which is something I ask people, including random bystanders, at least ten times a day.) To put it mildly, I had quite the chore on my hands.

Here's what I finally came up with: 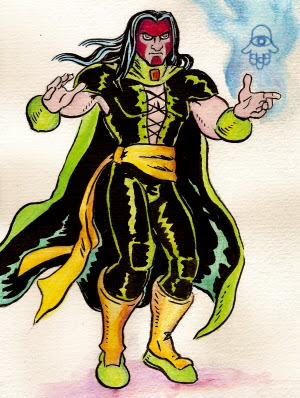 The last time I had to rework a tiara for a male character, I turned it into hair. This time, it's a tattoo. Or facepaint, if you're squeemish. I made it red, like the gem, instead of gold. Because it looks tougher that way! I think it lends a nice shamanistic feel to the character. I also added a smaller portion of tattoo/paint to the chin, to balance out the design. I changed the oval jewel to a rectangular one and moved it up to the neck. And I connected the cape to a tall, close-fitting collar. The lace-up bustier was turned into a Ren Faire/Barney Rubble lace-up vest. The fingerless opera gloves are now very long wrist bands (they go from the wrist to the elbow). The sash is a lot wider now -- kind of a swashbuckling, Arabian Nights type of thing. I kept the silhouette of the capri pants/slippers, but the negative space that used to be exposed skin is now the very stylized portion of the boots.

Whew! I think it holds together okay. That said, I really prefer the previous two costumes. They're a lot more fun!
Posted by Jeremy Rizza at 5:47 AM 6 comments:

Today I'm revamping the Enchantress' best-known costume. And boy, is it a tough one! Why? Because I say so, that's why! Never question me! Sheesh!

Fine, I'll explain. The Enchantress' 1980's outfit is a weird androgynous affair* that would have looked perfectly at home in a mondern dance company's interpretive ballet about Shang-Chi, Master of Kung-Fu. Plus? It had a kooky hat! But mostly the look screams "1980's!!!" The top is all loose and flowy, and the bottom is... stirrup pants. A girl could have worn this ensemble to the mall in 1986 Minneapolis and been the toast of Teentown! So my challenge was to somehow make it even more butch without going too far afield from the original design.

What I came up with is very "John Byrne." Which isn't necessarily a bad thing, as long as it doesn't involve those weird chunky metal boots he likes to draw... y'know, the ones that look like upended spittoons. Or Donna Troy's "business casual prom" costume from near the end of his Wonder Woman run. (Remember? The spiky off-the-shoulder number? Yikes!) Anyway, goes: 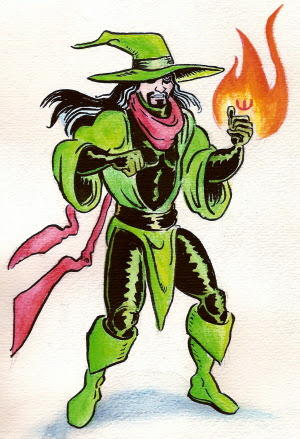 Or maybe it's more like the costumes John Romita, Jr. designed for the X-Men comics in the 80's. Can't you just see Rogue in this? Minus the hat, I mean? Okay, enough nostalgia. Let's break this thing down:

Long hair on a sorceror in the 1980's? Sure, I'll allow it! It's very "David Copperfield meets Aerosmith" so why the hell not? I opened up the front of the blouse/robe thingie and lengthened it on the bottom for more of a loincloth effect. Then I paired the black tights with a black top, so the Enchanter wouldn't show as much skin as the Enchantress. The boots are in a manly, swashbuckling mode, with the "V" shaped flap mirroring the shapes of the hat and the top. I finished it off with a stylized, Kirby-esque Fourth World-type goatee.

*Y'know, I once had a weird androgynous affair. I thought I'd finally gotten Lightning Lad to "switch teams" and then it turned out I'd actually gotten it on with his twin sister, Lightning Lass! Or so they claimed...!

Tomorrow: The Enchanter's final costume! How will I reinterpret yet another bustier? Yeah, I'm not sure either. Let's find out together!
Posted by Jeremy Rizza at 4:30 AM 5 comments:

Have you ever known somebody whom you thought looked kind of cute and fun the first time you met them, but that turned out to be a total fluke? Because every single time you've seen them afterwards they were dressed in clothes that were either ugly or way over the top slutty? And when you think back to it, even the first time you met them they displyed a stank personality? That's how I feel about the Enchantress. Not the grandly bitchy Marvel version, though. I'm talking about the DC Universe Enchantress, June Moone. Because when I saw this costume of hers as a little boy (in "Superman Family" #204 (December 1980) I just thought it was the cutest thing ever: 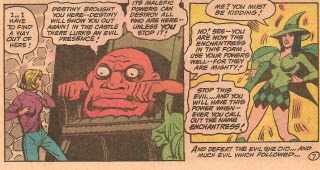 Forget (if you can) the freshly boiled Mister Potato Head with the thyroid problem... how about that costume? Green-and-black Harlequin-print miniskirt, finished with huge jagged edges created by the world's biggest pinking shears (probably manifested by the Spectre)? If this is a dream, nobody pinch me because I don't wanna wake up! And the hat? Adorable! It's like she's straight out of a Sandra Dee comedy, one with a title like "The Witchiest Debutante" or maybe "Love Me for a Spell." It's just a shame her personality is so humorless. Why dress cute when you're actually a total pill? Ah, well. 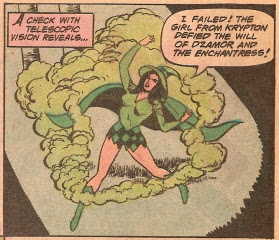 The Enchantress had a shot at being a fun, magic-using superheroine, a la Zatanna, based on her first appearance ("Strange Adventures" #187, April 1966). She even had a very Captain Marvel-esque origin, in that sweet blonde June Moone got her powers from a weirdo on a granite throne, courtesy of a (green) lightning bolt (not shown in the above flashback sequence). And I love that the bolt was accompanied by the sound effect "VOOM" (as in va-va-)! Alas, these salad days would prove to be short-lived. After a few more stories in "Strange Adventures" she dropped out of sight until 1980, when she was used as the sort-of-baddie in a two-part Supergirl story. Her fortunes have waxed and waned countless times since then. To me, however, she'll always be the gal with the cute pun name and the go-go check skirt.

Which is a warped, roundabout way of saying I'm dedicating a supersized Gender Reassignment Challenge to her. Three costumes: original, Suicide Squad era and Shadowpact era, over three days (today through Wednesday)! Wahoo!

The first costume is one of her girliest, since it features both a mini-skirt and a witch hat. Well sir, here's how I'd recajigger it for a man: 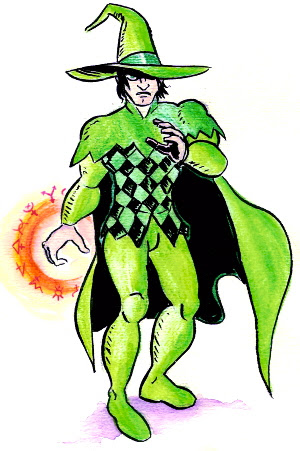 My first sketches for the Enchanter (a.k.a. August Moon*, no teahouse jokes if you please) had him wearing a Guy Fawkes/Matthew Hopkins, Witchfinder General hat, which is flat on top. I didn't like it. Too Pilgrim-y. I finally decided to lengthen the crown of the witch hat and make it like a Gandalf-type hat instead. Note how the brim slouches rakishly over one eye. His hair is Beatle's-length, but with some Goth pointiness and shag. I had initially loaded up the Enchanter's costume with 17th Century gear like these convoluted little boots with spurs on them, but I forced myself to edit it down into something that was more like a 1960's superhero costume... specifically, like Doctor Strange's. I used to hate that the Doctor never wore boots, but I totally understand it now. I altered the Enchantress' miniskirt into a waistcoat and kept the arms and legs of the outfit very simple, so as not to compete with the pattern.

*or if you prefer, Newt Eldritch.

Tomorrow: the Suicide Squad look, with some Byrne/Simonson flavor. See you then!