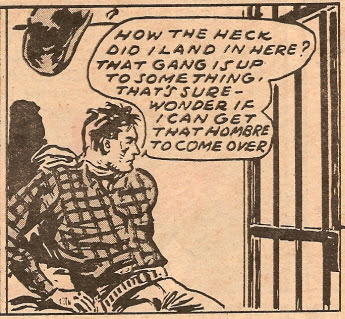 As a former inmate there myself (from my travels in the DC Universe's Ye Olde Weste) I'm proud to give you a tour of the Red Gulch City Gaol (or "Jail" as you 21st Century people spell it nowadays back then). Here is their one jail cell... and that's about it. The sheriff and his deputy don't even have desks. All they get is a single chair and they have to play rock-paper-scissors to decide who gets to sit down. The cell, however, has all the amenities a fashion-conscious felon would ever want. There are pegs on the wall so you can hang up your chapeau, stubble razors (remember them?) only since it's Ye Olde Weste they're powered by steam, a goodly selection of hair pomades and alcohol rubs and boot polishes, a little iron so you can press your kerchief, and a complete manicure/pedicure set. I loved that little cell! Too much, actually! It got to where I couldn't pass by the Red Gulch Citibank without at least trying to rob it, just so I could get sent to the "pokey"!

And what's this dumb shmoe in for, you ask? 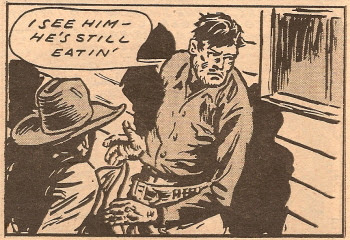 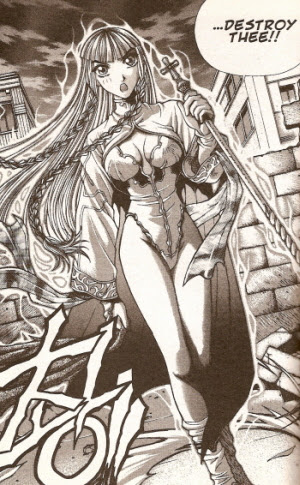 Hey, quit ogling her! Can't you see she's a nun? What the hell is wrong with you?! Christ almighty!

Okay, so according to the dialog (in "Rebirth" #1 from Tokyopop) she's technically a monk, but I'm having enough trouble accepting the idea that she'd wear that inane get-up under her (conveniently destroyed) robes without trying to factor in the notion of a co-ed monastery. Huh. I wonder if all the monks have to dress like that, or just her? ("Brother Matthew, the Abbot is concerned you're spending too much time studying the scriptures and not enough time grooming your bikini area.")

But mainly it's the tonal discrepancy that bothers me. "Rebirth" is a serious, if melodramatic, action-horror manwha and then you have Our Lady of Perpetual Hotness here looking like she just stepped out of a David Lee Roth video. I dunno. Maybe I don't get it because I'm from a different culture (i.e. the FUTURE!).
Posted by Jeremy Rizza at 12:21 AM 5 comments:

Rescue Me: The Wrench

Not all of the D-list villains assassinated by Scourge were lucky enough to have their final moments of ignominy illustrated for the approval of bloodthirsty fanboys. Some of those perfidious unfortunates had to make do with a Scourge "honorable mention." Getting name-dropped by Scourge wasn't exactly on par with a mention on "Page 6." It's more like working your ass off on a diorama of "Lab Coats Through the Ages" for the Lunar Elementary Science Fair and receiving a Certificate of Participation, while a lazy dim-bulb like Weight Wizard submits a stalk of celery with freaking googly eyes glued onto it and walks away with a goddamn red ribbon and sure, later you hold him down and threaten to force-feed him googly eyes until he gives you his ribbon but somehow it just makes you feel all hollow inside... um, but I digress.

The Wrench was one of those off-panel victims. "Who?!" you ask. Exactly. The Wrench, a.k.a. Kurt Klemmer, wasn't exactly what you'd call a "supervillain." He was just a big crazy oaf in overalls who clubbed folks to death with a big wrench. Oh, and he also carried a gun. He didn't have a costume and to be honest, he was never even called the Wrench in the one comic in which he appeared ("Omega the Unknown" #6). That comic's cover has one of those old-timey bombastic word balloons where a Hulk-sized Klemmer boasts about "THE POWER OF THE WRENCH" while he belabors Omega about the noggin with a perfectly humongous wrench that leaves a crackling energy trail. (You could always rely on a Gil Kane cover for a spicy, over-the-top rendition of a book's actual contents!) So it's unclear whether that pimped-out version of Klemmer was referring to himself in the third person and by a code name at that -- admittedly, normal villain behavior in the world of 1970's Marvel -- or if he was just really proud of that wrench!

I think it's clear that Omega's writers, Steve Gerber and (uncredited) Mary Skrenes, never intended for Kurt Klemmer to be an out-and-out "supervillain." Which is totally cool. But could he have worked as one? I think so. He had an interesting hook, in that he was a handyman who was obsessed with "fixing" his fellow human beings. Which involved bludgeoning them to death with a wrench, but hey, it's a start. He was a big, sturdy guy, so at normal strength with an ordinary wrench for a weapon he'd make a fine adversary for one of the Marvel heroes who fight street-level crime, like Daredevil or Power Man. Or a writer could go the "Absorbing Man" route with him and have some cosmic being magic-up his wrench so he could battle Thor and Iron Man. Maybe he could join the Wrecking Crew! And maybe he could dress like so: 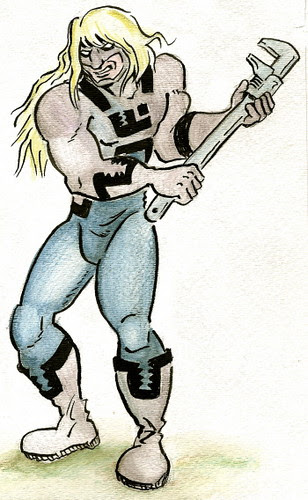 I thought a somber blue/gray color scheme would be more appropriate for Mister Klemmer's hypothetical villain costume than the mustard hue from his overalls. I designed a stylized "W" using the shape of a wrench, and I added stripes to evoke the overall straps. The boots and gloves have cut-outs in the shape of a wrench's clamps. (Or whatever they're called... here in the future we fix everything by waving a humming rectal thermometer over it!) The long, shaggy haircut symbolizes the Wrench's unkempt mind. I decided to bleach it out to more of a white blonde so it's more dramatic. 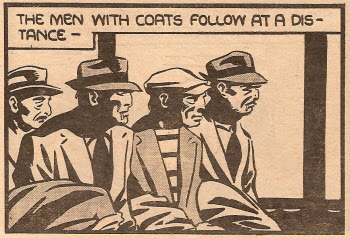 Nobody can press a velour jogging suit like the gentlemen's gentlemen of the New Jersey mob!

And what's under those coats? I'm guessing it's a spare wifebeater, some pinky ring polish, and a little jar of cement shoe remover.

(Sorry about the delay. When I called my internet provider OF EVIL! last night about my connection problems, they told me it was a neighborhood-wide service blackout. When I called them tonight about the same problem, it was just me and had nothing to do with that localized outage at all. I'm guessing "neighborhood-wide service blackout" is internet tech guy code for "Your phone call is keeping me from enjoying my caramel latte and I really don't feel like dealing with you right now." Feh!)

Tomorrow: a "Rescue Me" design for the Wrench!
Posted by Jeremy Rizza at 7:46 PM 5 comments:

Anorexic Get Your Gun 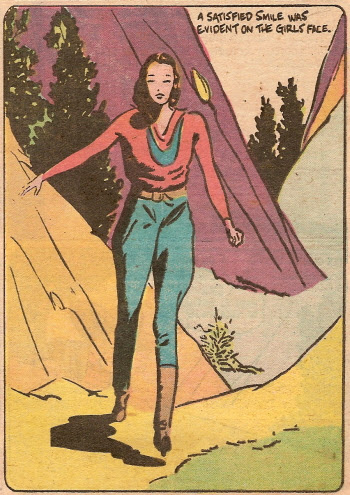 Eating disorders of the OOOLLLLD WEST!

Well, it's not so much a smile as it is a rictus but still. I guess she's smiling because she managed to avoid nibbling at that gigantic pancake somebody had temptingly placed on the eastern slope of Mount Hood. She's still troubled by how much bigger her thighs are, but that's only because no one bothered to explain to her that she's wearing jhodpurs.
Posted by Jeremy Rizza at 4:33 AM 11 comments: