Hey there, everybody! It's me, Blocked Boy... er, I mean, "Blockade Boy." Sorry this took so long. I was worried I was starting to repeat myself with my costume designs, and it took forever to push through my creative block. So this will be a catch-up weekend for me. I'll post my Grunge-to-Rockabilly design either tonight or tomorrow. My big Thor post will be Monday. They're already designed, so all I have to do is draw them. After that I might back off the artwork posts a tad -- say, only once or twice a week, with my old wise-ass commentary on the other days.

So, by the special request of commenter Simon, I tackled Steeplejack 2. How could I have guessed he'd be my biggest design challenge ever? I knew right away I wanted to get him out of that stupid green bodysuit. And the Golden Age Flash rip-off helmet was a goner (just like Steeplejack 2, heh-heh) along with the meaningless pocket-tastic harness doohickey. But beyond that? My first instinct was to armor the bejeezus out of him but I've done that way too much lately. And I liked the bearish vibe of the meaty, slablike original, but I didn't want to just copy that look, either. I was stuck.

And then I remembered how much I liked the Wrecking Crew. Particularly Bulldozer. And I decided to put him in more of a regular supervillain costume, but with my trademark Blockade Boy twist. 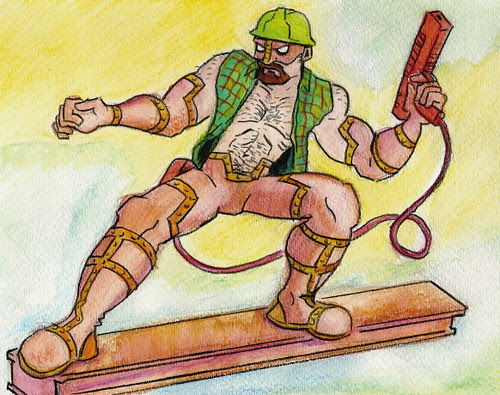 I love to combine old-fashioned super-costume elements with street clothes -- as you can see from my current costume. Steeplejack 2 was a perfect candidate for that look. So I dressed him in a leather outfit that simulates the look of rusting, riveted steel. The trousers have that plunging waistline I like so much. (I just can't seem to help myself on that score.) Then I gave him a genny-ine hardhat and a flannel shirt with the sleeves ripped off, to give him the flavor of a regular "Joe Lunchpail" type.

But I see some of you have raised your hands. To answer your unspoken protests, yes, I know this Maxwell Plumm person is a sleazy businessman and about the furthest thing away from a working stiff, like, ever. Relax. I got you covered. I've an idea that would have reinvigorated the Steeplejack concept and given it some longevity. Howsabout... he "gets religion" and becomes a hardcore, radical socialist? And his modus operandi becomes violent "home invasions" of sky-high penthouses, wherein he takes small valuables like jewelry and then trashes the place before he leaves? He could put the loot in a lunchbox with a magnetized base so it stays stuck to the girder. And then he uses the money to fund various radical causes. Voila. Instant Captain America villain. Think of the havoc he could wreak at a WTO protest! Oh, and howsabout... he travels around on a flying girder? (pauses, waits for delighted applause to die down) He could use the girder to smash through windows and to batter his foes. How would that work, precisely? It could be controlled with hidden foot-pedals, or maybe he has a psychic link to it or it's just magic (paging the Enchantress!) or sumpin'. Y'know, if he was in the DC universe it would be a snap -- the girder would just be constructed of Nth Metal or whatever the hell Braniac 5 made those flight rings out of. For Marvel? I dunno. I just think it would be an incredible visual -- plus it would be quirky and interesting enough that your typical idea-starved Marvel editor would think twice before deciding to off the guy.

Because It Made Me Look Like A Goddamn Leprechaun, That's Why

Sorry, no Steeplejack 2 post yet. I just haven't figured out an interesting redesign for the guy yet. My best effort so far wound up looking a lot like my Shellshock design. I don't want to fall into a body armor rut. But I'm gonna keep trying. If I can't come up with something I absolutely love for him tomorrow, I'll go ahead with my Time Travel post. 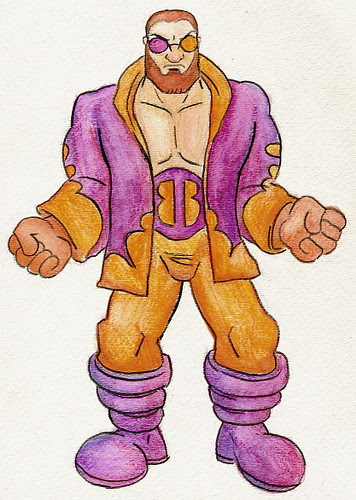 I redyed and slightly altered my boots from my last costume (frugal!) and I combined them with some tights, a wrestling belt and a spankin' new hoodie I sewed up to create a sort of hip-hop/Tekken 2 look. And although it caused me deep, spiritual pain to do so, I shaved my chest. The costume just looks better this way. I take my one consolation in the fact that my arms still look like an ape's, praise be to God. I love the goggles. They add some 21st century superheroic flair, since they're a bit like a mask, and they also give some needed color to my "head shot" now that I've foregone hair dye. And the bubble shapes on the hoodie were inspired by comic book thought balloons, since assisting other comic book folk is my stock in trade. Also, they soften the look and help keep it from looking all grim 'n' gritty.

This costume is based on one I'd designed in case the "Wolverine" look had won the poll. I did three costume designs for the poll choices -- one for the two mustaches, one for the muttonchops and one for the Donegal. Here they are:

The original Donegal costume was going to have black tights and shoulder patches with side-by-side orange and purple on the top and boots. Once I drew it full size, though, I realized it looked like something Duo Damsel would have worn for cardio boxing. That darned bustier shape on the top...! I might as well have worn a sports bra, too. So I decided to switch to my muttonchop design. Which was just okay. It didn't seem to go that well with my ultra-dramatic Donegal though. And the more I thought about it, the more I didn't want to have to see it on my blog page every day. I'm pretty happy with this new one, though!

All Glory To The Highfather! 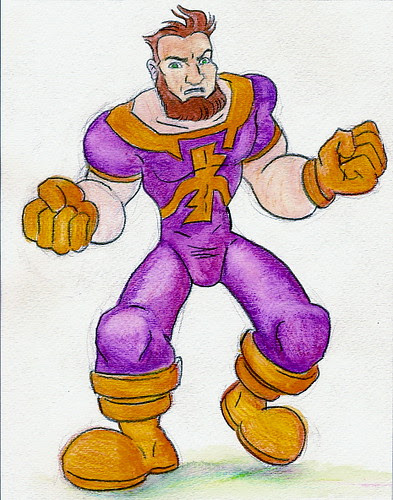 When I closed the polls -- nominally at 10 PM last night, although it turned out to be barely 10:01, with somebody getting in one last vote at that time, the "Highfather" vaulted into a decisive lead over the second-place finisher, the "Doctor Strange." Here's the voting breakdown:

So that's 197 votes in all. (Coming from probably five people... heh, heh!) Now, I love all these looks -- or else I never would have offered to grow them -- but I will admit that y'all surprised me. I had a feeling that the "Dum Dum Dugan" would be a front-runner, after all my gushing about it in my earlier posts. But somebody out there was hell-bent on my growing the "Highfather." And I'm more than happy to oblige. It's a splendid beard, if I do say so myself: luxuriously long and thick, yet beautifully trimmed and shaped, and it looks boss as hell. I have a real "circus strongman" thing going now. I only hope Brother Bicep doesn't get too jealous.

I sketched various costumes to go with the different facial hair configurations. For the "Highfather" -- which is actually a Donegal, and here's a page showing a rather handsome young man wearing one -- I went with a low, square neckline and short sleeves. With such a gloriously leonine beard on display, I thought it would be best to show a little skin. It goes with the strongman/tough guy/fantasy barbarian feel of the beard. (I've taken to monopolizing Jeremy's churchwarden pipe, since I look so much better smoking it than he does.) And the costume is purple and orange. But of course.

Thank you, everyone who voted. Have a terrific day!

Quite some time ago, the vigilante Scourge embarked upon a mission to rid the world of super-villains -- provided they were kind of lame and didn't have terribly illustrious careers. Oh, and it helped if their costumes sucked. That's the kind of villain Scourge really enjoyed shooting... in the back.

I'm no fan of Scourge, or of his editorial purpose. Personally, I think a good story can be written with any character. It's just takes enough imagination and effort. And in the case of Scourge's victims, I'd start by giving them better costumes.

Bird-Man 2 was one of the Ani-Men. And that's about all I could find about this guy on the web. I couldn't even find an image of him. I know he succeeded the first Bird-Man, a.k.a. Henry Hawk. Not to be confused with Tony Hawk. Whose nickname is "Birdman." (My head; it is spinning.)

Okay, so I did find out that at least one of the Bird-Men got his powers from his costume. And Count Nefaria had his scientists mutate the Ani-Men into naturally super-powered people. And there were antennae on the sides of the Bird-Man helmet for some reason. I hope that The Thing That Walks Like A Man, who seems to be really into Bird-Man, can explain it all to me.

As you can see from the link, the Bird-Man costume is kind of stupid. Not a big surprise to me, since I hate bird costumes. I can only think of a few that I like: Frank Quitely's Owlman design, the G-Force teens, Hawkman (natch... hairy chest time! Woo!), er... the Blue Falcon and Dynomutt... okay, I'm done. Anyway, it's hard to design a bird costume for a super-character and keep him from looking like a college football mascot. Or some drama major cavorting in front of a fast-food joint. So this was a helluva challenge for me just by its very nature. As an added challenge, I promised myself I'd include the antennae, and I'd keep them on the helmet. So here goes: 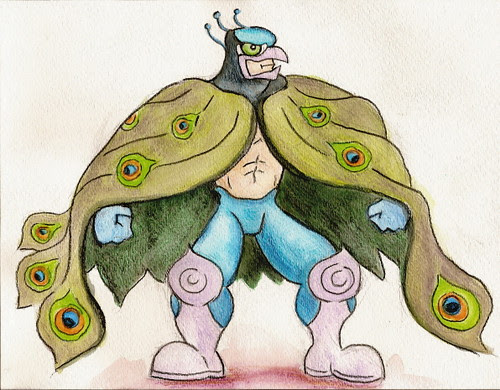 Yes, everyone's beautiful at the ballet. But seriously, I was trying to think how I could make the antennae look like a natural part of the helmet design instead of just jamming the damn things on the sides of it, like whoever did that with the old costume. And yes, I understand that the antennae were a unifying visual element for the Ani-Men but we're not talking about all of the Ani-Men now. We're talking Bird-Man, solo. At first I tried a "great horned owl" theme but it looked way too much like Quitely's Owlman. And then I came up with the peacock idea, with the antennae as the feathers in his crest. So we have the peacock helmet, the cloak that looks like a peacock's tail, gorgeous iridescent blue on the gloves and trousers, some purplish-silver metallic boots, and because I just can't help myself sometimes, a bare chest. (I know, I know. Sue me.) The cloak isn't attached to the wrists, because that would be stupid. But I'm sure it billows like a mofo when he's flying. That would look kinda cool.

Now, if I only knew the first thing about him--!
Posted by Jeremy Rizza at 8:13 PM 6 comments: