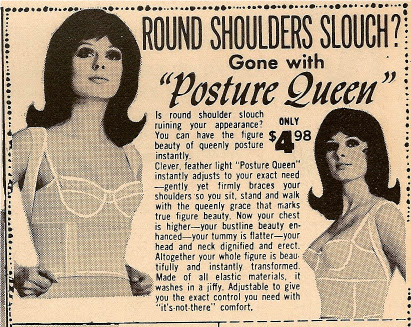 She has the power to give anybody "perfect posture" for up to half-an-hour. Bad Apple Boy showed me the holo-vid of her Legion of Super-Heroes audition from a few years back -- somebody dug it up, slapped some dance music over it, and put it on UniversoTube. At first, I was going to just ignore Bad Apple Boy, due to the manner of his address. ("Yo yo yo! B-B! Check it out! This ho is wack!" ...AAAGH.) But I have to admit, the holo-vid was a knee-slapper. Posture Queen suffered from the old "M-my power--! I can't control it!" syndrome, so the Legionnaires wound up with their spines bent backwards. Sun Boy's scalp was practically touching his ass, which I found delightfully symbolic. Anyway, Bad Apple Boy goes off on a rant, liberally peppered with "street" lingo, all about how Posture Queen looks like a "straight-up skank" with a "broke-down booty", but admitted that he'd also "like to hit that." And so of course, we hear somebody clearing her throat and we turn around and there's Posture Queen herself (cue musical "stinger" on a phlegmy trombone) because she's Eyeful Ethel's latest hire! Posture Queen is apparently Ethel's new "personal assistant", which turns out to mean that she has to sit at the receptionist's desk while Ethel does Who Knows What in her office with the actual receptionist, Phantom Lad.

Yeah, Phantom Lad. I know. It'd be like making out with a shrunken apple head doll.

But it's not like he's cheating on his girlfriend. Not exactly. I guess Phantom Lad and his paramour (and co-worker) Frigid Queen have been on the skids even more than usual lately. She booted his ass out of their one-bedroom pod, and have settled into a routine where Phantom Lad goes on the town and "gets hisself some" (to quote Bad Apple Boy) while Frigid Queen stalks him and is glimpsed through windows and binoculars, making threatening gestures with a melon-baller.

And in a month or so, they'll switch. 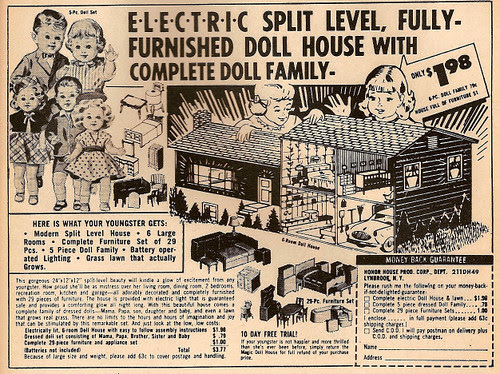 It's only $1.98 for the whole set, plus another $5000 to warranty against the dolls coming to life and murdering you in your sleep. (With the warranty, the worst they'll do is smack you around a little.)

...And with that, I'm taking a short break. Undercover space-detective stuff. I'd explain it, but then I'd have to travel back in time and kill you all.

Don't fret! I'll be back on the blog job, next Monday!
Posted by Jeremy Rizza at 4:59 AM 6 comments:

Here's a panel from a promotional comic that was given away with every kids' meal at "Extinction" E Saw's Eatery. It tells the heartwarming story of the first (and only) social worker to set foot on Rimbor. The succeeding panels show how she was immediately beaten senseless with her own hat, shoved into the garbage chamber of a rocket-barge, and shot back into space. I believe the moral of the story is, "Don't meddle." (And might I add, screw that noise! I'll meddle all I wanna meddle! I'm the goddamn Blockade Boy!)
Posted by Jeremy Rizza at 12:53 PM 4 comments: