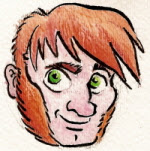 Greetings from the 30th century! I have good news and I have bad news. What's that? You want the bad news first? Man, are you a downer! Alrighty then. The bad news: due to time constraints (i.e. my old/new boyfriend Weight Wizard is insatiable) I have to reduce my posting to once-a-week. The good news: every post will feature a new costume redesign. I have a huge backlog but I'll get to every one I promised I would.

By the way, how do you like the new muttonchops? They're even bigger and muttonchoppier than the old ones! And the hair? It's eminently mussable. And Weight Wizard loves to muss it, believe you me! And I love the red. I decided to splurge and get myself a professional coloring job -- from Color Kid, natch. The man is an artist.

Okay, okay, enough about me. For now! Let's get down to business. Last summer (your time) I started redesigning the costumes of every supervillain ever killed by Scourge, based on my theory that they would have been spared by the vigilante and gone on to live rich, fulfilling lives, if only they'd dressed better. This week, I solve a problem called "Commander Kraken." 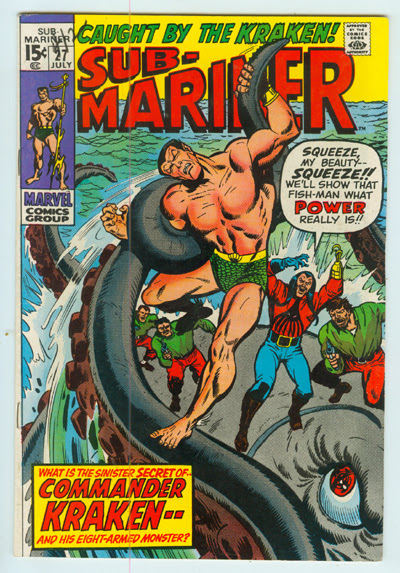 Kraken was a modern-day (your time) pirate. Just by definition he should have been cool and boss and rad as heck, but no dice. He was just a goober with complicated facial hair (quiet, you!) and a pathetic little three-pronged prosthetic hand. On the plus side, he also had a squid and said things like "Squeeze, my beauty -- squeeze!!" But take away the squid, and what do you get? A big, hairy, three-pronged zero.

So here's how I would have spruced him up. 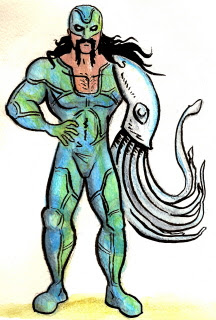 You all know how much I adore historic costume -- waistcoats and thigh-length boots and tricorner hats and trapeze dresses and hoodies and such -- but that solution would have been too easy. So instead I went high-tech. The modest li'l prosthesis is gone, replaced by a way-cool robotic squid-arm with lashing tentacle action! (Insert lascivious comment from Scipio here.) Instead of pirate garb I have an ocean-themed wetsuit. I added a few traditional outlaw elements, like the Zorro mask-scarf-thing and the hair. When the Commander reappeared, in an issue of "The Cat," he had a squid-like beard, but I trimmed that down to a long, dangly biker 'stache so it wouldn't distract from the suit. Or the squid!
Posted by Jeremy Rizza at 5:57 AM 8 comments: