In the gender reversal challenge, I take a very ladylike superheroine costume and redesign it for the male figure, keeping as many of the original elements as possible without making the guy version look like he's in drag. This time, I decided to tackle a supervillainess instead: the notorious Star Sapphire. The Star Sapphire most folks are familiar with is the Silver Age version, who first appeared in a very tasteful outfit designed by Gil Kane.

The girly elements: the color scheme, exposed thighs, and a freakin' tiara.

She's had a goofy assymetrical space-amazon get-up in the 80's and 90's. We shan't speak of it again. But her latest ensemble certainly got tongues wagging! 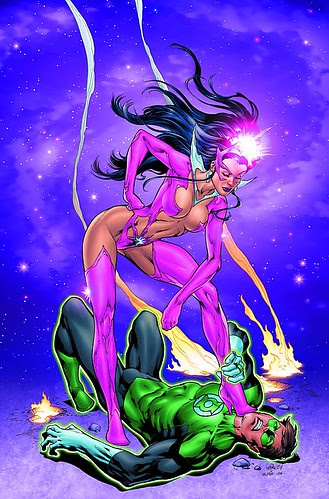 For my male version of Star Sapphire, I first decided I'd have to change the name. "Star Sapphire" is too feminine. I knew I wanted to stick with a gemstone, and something both evocative and plausible for a Silver Age comic. (That's why my first idea -- "Blood Diamond" -- went by the wayside. Too "Image" and also it's a relatively new term, and a politcal term instead of a gemological one. After a little research on gemology, I came up with "Red Emerald." That's one of the names for bixbite, a rare, violet-red stone. I wasn't completely taken with it. It's clumsy and fakey-sounding, and it doesn't scream "supervillain" so much as it does "male stripper." Or a really gay fishing guide! But then I discovered the mandarin garnet! Now, "mandarin" is a great villain name! And "garnet" sounds marginally manlier than "sapphire." Although I recall in "Return to Oz" that Auntie Em's sister is named "Garnet." And before you get all huffy and lecturing, science nerds, I know there is such a thing as a mandarin sapphire. The problem is (according to all the images I've found) the color is washed-out in comparison to the magnificent mandarin garnet. And since the garnet's color is still reddish, it's not too great a change from the pink/magenta of Star Sapphire.

So here's my idea for the Silver Age and modern "Mandarin Garnet": 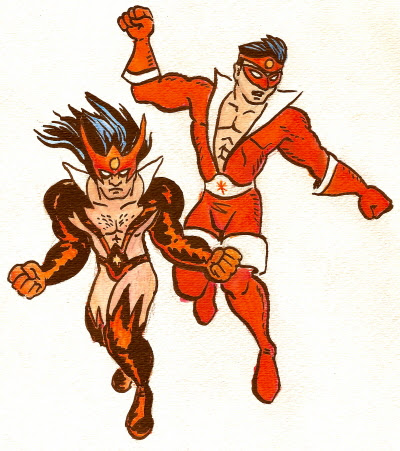 Er, that's the modern one on the left. And yeah, I kind of over-inked him. Oops.

For the Silver Age version (Carl Ferris!) I changed the tiara into a circlet. To allude to the "bare thighs" thing, I altered the boots, so there's a space between the red on his tights and the red on his calves. And to match the boots, I changed the gloves a little. Since Mandarin Garnet is a guy (no, really!) he can get away with more exposure on the chest. It's very "ballroom dance champion" but I think it works.

Since the current Star Sapphire's costume is already so skimpy, I felt like I could get away with bare thighs on the male version without it looking too girly. To balance out the exposed skin on the thighs, I exposed even more skin on the torso. And yet I covered the nipples, for the more sensitive among my readers. I brought the "tiara" down on his forehead (like I did with the Scarlet Warlock) and I extruded the upper edges into kick-ass devil horns. And since it's modern, he can get away with long hair. And chest fur! RAWK 'N' ROLL!!!