This Looks Like a Job for an STD-Riddled Bottle Jockey!

Wow, it has a coin acceptor! Little-known fact: Tony's last high-tech pacemaker conked out on him in the middle of a spectacular three-way with Pepper Potts and Jarvis, and he had to construct a brand new one on the spot out of the "magic fingers" vibrating bed in their filthy little motel room. The only downside is that he has to keep feeding it nickels.

By the way, you know what all the upper-class business magnates like to wear?

...Oops. My bad. That's actually what pimps like to wear. (Tony still qualifies!)
Posted by Jeremy Rizza at 9:17 PM 14 comments: 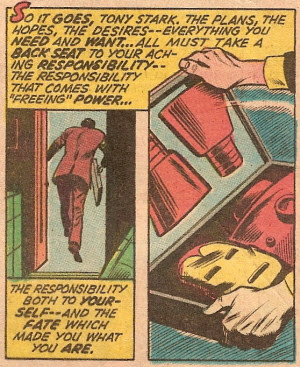 Y'know what? The whole woe-is-me whiny-ass Marvel super-hero bullshit really doesn't work for me when the character in question is a suave, handsome, priapic billionaire. And it's not like he's Bruce Wayne, where he always manages to narrowly avoid getting it on with some gorgeous gal in his civilian identity. (And if Bruce Wayne ever did let things get that far, I just know his mind would be busy drawing up plans for a new Batmobile engine or concocting an antidote to the Scarecrow's newest psychotropic gas -- even as his scarred, sinewy member mechanically and efficiently probed for her clitoris.) Naw, I always got the impression that Tony Stark is deeply in love with being Tony Stark. So Young Gerry Conway will have to excuse me if I don't go all weepy at the sight of a wealthy ladies' man who has to drop everything at a moment's notice so he can put on a super-suit and fly around.

Alright, who here wanted that open briefcase to reveal a clown costume or a pair of glittery short-shorts and a sequined headband instead of the Iron Man suit? ...Just me? Okay, then.
Posted by Jeremy Rizza at 9:15 PM 4 comments: 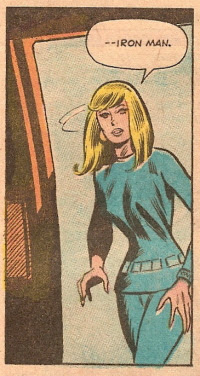 Don't you know anything, Betty Cooper Marianne? If you look away from a wealthy industrialist for even a split second, he'll vanish. Those guys are just like leprechauns! Or Batman! But merely speak his name three times while not wearing a bra and presto! He appears right before your eyes, holding a vodka tonic and a rag soaked in ether.
Posted by Jeremy Rizza at 9:01 PM 2 comments:

Waiting for the Other Balcony to Drop

So. If I understand this correctly, the balcony is disintegrating slowly enough for Tony and Marianne to deliver that pause-heavy dialog, and yet the people on the balcony are just standing there doing flagless semaphore poses* instead of trying to, oh, I don't know, run away. Or maybe they should just jump! Given the wonky perspective in this book, they're probably only three feet off the ground!

*I think at least two of them are in the middle of performing Wade Robson's "Waiting for the World to Change" choreography from last Tuesday's episode of "So You Think You Can Dance." Therefor and ergo, the balcony is collapsing from the weight of all the suck.

Also I think the lady on the far right is about to blow a kiss to Tony! *mmmWAH!* (Tony's got a gal (or five) in every airport!)
Posted by Jeremy Rizza at 5:55 AM 10 comments:

That's the Way the Plotline Crumbles 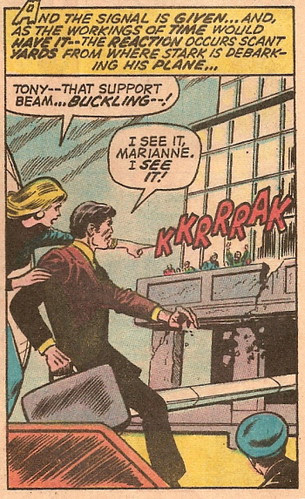 Subtext: "...So try not bitching at me for ten seconds!" Criminy. She spent nearly the entire plane trip with her mouth shut (granted, her thought balloons were suffocating) and now Tony's shutting her down at the first opportunity. Jerkoff. Also, don't look now but I think Machine Man is trying to pick your pocket. Or cop a feel. I'm not sure what's going on with him.
Posted by Jeremy Rizza at 7:09 PM 16 comments:

Except you didn't have to tell her Iron Man was flying with you in the first place, Tony! Oh, tired "secret identity" trope, how I loathe you!

I see that Airport Security feels the same way as I do, because an officer is rushing over to Tony with a length of bamboo so he can cane the crap out of him.
Posted by Jeremy Rizza at 6:49 AM 11 comments:

Really, Any Day Now, Something is Going to Occur 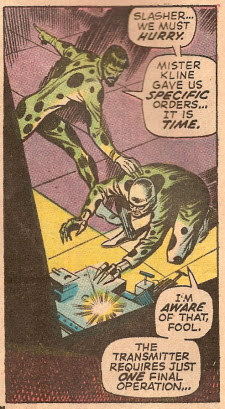 They're working for Kevin Kline?!

Naw, can't be that. As villain names go, though, "Mister Kline" doesn't have much oomph. Sounds more like a bitchy fashion critic than a would-be world conqueror. I'm picturing a spindly, aging man in a navy blazer with an ascot and a jaunty captain's hat. One hour earlier he sent Slasher and Demitrius on their way: "Into the moist Washington afternoon, my harlequins of righteousness! Soon the city -- nay, the very world will know what I think of that gown Angie Dickinson wore to the Emmy's!" (Aaannd cue nasal yet maniacal tittering.)
Posted by Jeremy Rizza at 6:22 AM 3 comments:

Holy balls, what a racket! Did a howler monkey get lodged in the wheel well? Are Tony and Marianne finally gettin' it on? Is the runway constructed of squeaky styrofoam? Is there a Pussycat Doll just off-panel? I can't take it! As Slasher would say, I must use my HANDS... to cover my EARS! Stand back, Demitrius! ('Cause I move my arms in a broad, sweeping manner...)
Posted by Jeremy Rizza at 5:55 PM 4 comments:

Try saying this -- with Slasher's dramatic inflection -- the next time somebody at work hands you a memo. Guaranteed laughs! (Or a swift termination.)

Okay, let me see if I understand this. Slasher spent several panels hunkered down in an alleyway, assembling a device that could have easily fit in a nondescript cardboard box and just transported to that location without anybody giving him a second look. And he did this while wearing a bright orange aviator's helmet with attached goggles and green coveralls with gigantoid black polka-dots. So there goes the argument that that he didn't want to attract attention. So what was the point of all this? Oh yeah: DRAMA!!!

Next: Something happens! Possibly!
Posted by Jeremy Rizza at 5:45 PM 2 comments:

Jack of All Blogs, Master of None

Love Me, Love Me, I Say That I Love Me 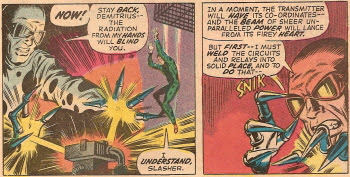 Oh, just flip the goddamn switch or whatever you freakin' drama queen!

Sorry. Only a few pages in and already I want to kick nearly every character in the 'nads. Hard. Especially Slasher, who appears to be enjoying a steamy romance with the sound of his own voice! Can you imagine what it must be like for Demitrius back at their crummy little hotel room? The sensitive l'il terrorist has to clamp his pillow over his ears while Slasher has loud, wet phone sex with himself (using two tin cans and a length of twine).
Posted by Jeremy Rizza at 6:16 AM 3 comments: 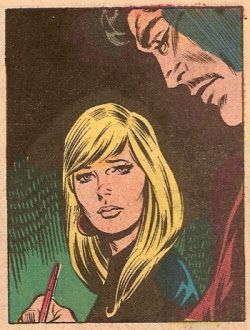 It's a good thing the Invisible Girl Marianne isn't sitting on Tony's left, or else she'd see that there's a big hole in his head... and there's nothing inside! (Except maybe a diorama of Iron Man banging Madame Masque, made out of pipe cleaners.)
Posted by Jeremy Rizza at 5:59 AM 4 comments: 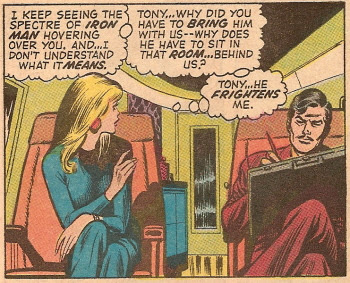 Wait, he told her Iron Man was on the plane with him? Was that even necessary? And he's in a "room" on the plane? That's not even a good lie! (Is this when we were all supposed to figure out he's a Skrull?)

Or is Marianne just really bad at crafting poetic imagery? Her previous attempts:If only Tony could tear his eyes away from that filthy connect-the-dots he's working on, maybe he'd notice she's upset!
Posted by Jeremy Rizza at 8:40 PM 7 comments:

Double-Header: what is he good for? Absolutely nothin'. (Say it again.)

The Legion auditions are like your 21st Century reality shows. It's a cattle call. And alongside the talented folks who get turned away for not being good-looking dickweeds, there is another class of rejects. That would be the no-talent opportunists who know perfectly well there's no way no how they'd ever get into the Legion but they show up and make a scene so their names will get into the evening's holo-papers. Which is my way of saying that Double-Header is to the Legion what David Kenneth "Sex" Soller was to "So You Think You Can Dance." 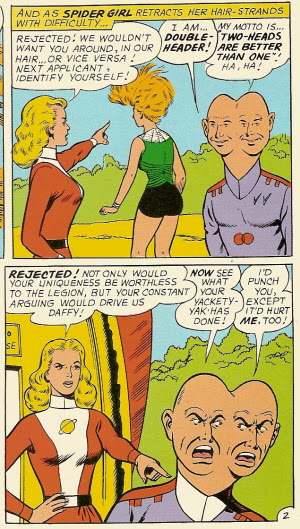 Look, I know Double-Header. He's not a bad guy. And he's not dumb. And I've certainly never seen his left and right heads fight... like that anyway. Naw, they get along just peachy. (The left one is the dominant personality... the "Mary-Kate Olsen" of the pair, if you will.) It's an act, and Double-Header only auditioned in the first place to impress a girl. It didn't work, but he still gets called up by the media for a juicy quote whenever the Legion holds another round of auditions. I guess it wasn't a total loss.

How could I have made Double-Header a viable Legion prospect? It stumped me for a while, but then I found my hook: Triplicate Girl's Tri-Jitsu. 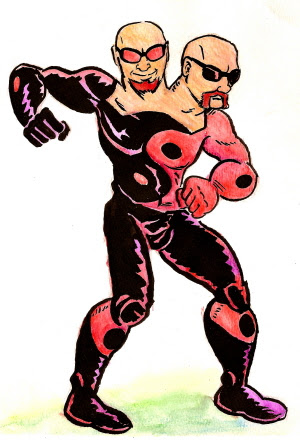 As seen in Double-Header's subsequent appearances, he had surgery to separate his fused skulls and give them independent mobility. So he can now look in opposite directions simultaneously. I think that'd make him a real boss martial artist. He could even invent his own fighting style! Like "Juduo" or "Kung-Two." The only catch is that he'd have to be a better fighter than Karate Kid to actually make it in! ...Or else Karate Kid would have to meet with a terrible debilitating accident. (I'm sure that could be arranged.)

Double-Header's costume incorporates the Yin-Yang symbol. I made it black-and-red instead of black-and-white because you don't see that as much, and it makes him look more like a tough customer. And yes, I suppose it's asymmetrical even though I've railed against asymmetrical costumes in the past. Criminy, I'm never going to live that down, am I? In my defense, I'd just like to say that by making the dominant color a neutral I keep the design from looking garish or clown-like, and also that rules are meant to be broken -- but only by a professional such as myself. I experimented with some hairstyles for Double-Header, most of them of the mohawk variety, but I finally decided he looked best with the shaved thing he already has going. However, I gave one head a killer biker 'stache and the other a sweet-ass goatee to help define them as individuals. Both sets of stylish shades were going to be red but I accidentally started inking one in and I decided I liked it better that way. He still might not get accepted by the Legion, but I bet he'd make for a cool bouncer at a nightclub!
Posted by Jeremy Rizza at 5:28 AM 12 comments:

Weight Wizard's been acting all pissy lately, shirking his chores and back-talking me, which would be understandable if he was fourteen and not twenty-two. So I sat him down for a talk. By which I mean I made him listen to me sing a song about a proper space pirate: me! (With apologies to the Mary Poppins soundtrack.)