Conversations With Dud People, Part One

*interbloggamunicator lights up, plays tinny version of "Flirtin' With Disaster" by Molly Hatchet*

Blockade Boy: Just tell me what the problem is, so I can save all y'all's asses again and get back to my vacation.

Storm Boy: Sure, because it's obviously doing wonders for your attitude!

Storm Boy: Relax, space-ape. There's no "problem." In fact, everything's been aces since you left!

Blockade Boy: Uh-huh. I ain't buyin' it. None of you clods could wipe your own asses without me around!

Storm Boy: If you'd bothered to tell anybody where the hell you were going, I could ship you an industrial levitator. So you could get over yourself.

Blockade Boy: Fine. So why are you pestering me right now?

Storm Boy: Mainly I just wanted to make sure you were doing okay, but you know what? You can go screw yourself.

Blockade Boy: Okay, okay... you're right. I'm sorry. I'm acting like a real bear. I mean, more so than usual.

Storm Boy: We really are doing great, by the way. I'm not shitting you.

Blockade Boy: If you say so.

Storm Boy: It's just -- oh, how can I put this without it sounding all catty? ...It's like, you were kind of the problem.

Storm Boy: Well, you know... you're kind of... overbearing? And a control freak? And you kind of make everybody just defer to you, even without you doing it on purpose or consciously or whatever? I think that's why all of us were just hanging out at your pod all the time, waiting for you to tell us what to do.

Blockade Boy: Which, of course, I never was. Since most of you annoy the crap out of me.

Storm Boy: So, once you left, it was like a big, hairy blanket had been lifted off of us, and we could finally breathe and move our limbs. The rest of them are really good guys, once you get past their little quirks, and I figured out a cool new direction for us! By whom I mean, "me and Bad Apple Boy and Posture Queen." Not you.

Blockade Boy: What about Phantom Lad?

Storm Boy: Oh, he took off. He said he had a hot lead about rioting on Imsk. Really tiny rioting. He wants to sell the story to U.P. News and Worlds Report.

Blockade Boy: Are you remembering to feed Cootie?

Storm Boy: Rainbow Girl is taking care of her! It makes more sense, if you think about it. They've really bonded. You might have a fight on your hands when you come back! ...By the way, when are you coming back?

Blockade Boy: I dunno. I feel like I can be more like "myself" out here. Sometimes I think I'm not cut out for Polite Society.

Storm Boy: Heh. I think you're right. Oh! I just figured it out! You're on the Planetoid of Peril!

Blockade Boy: What th'--?! You deduced that from what I just said?

Storm Boy: Nope. I just caught a glimpse of the Citadel of Doom over your left shoulder. Well?

Storm Boy: Don't you want to know about our exciting new direction? It's the other reason why I called you.

Blockade Boy: Yeah, sure. Astound me.

Storm Boy: I've reworked our "sound" to really spotlight the Electric Sousasaxotimpanibone. It's astro-ska! Posture Queen is choreographing all our dance moves, and she plays a mean nuclear-powered zither, and we have Bad Apple Boy on glockenspiel, plus of course he raps.

Storm Boy: And now that Tusker and Dentata Damsel are out of the nervous hospital, I've snagged them for banjo and didgeridoo, respectively.

Blockade Boy: Holy cats! You're serious about this.

Storm Boy: We've played some nightclubs already, and we're auditioning for a scout from Computoblanca Records. Oh! And Element Lad and Invisible Kid want us to play at their wedding!

Storm Boy: Yeah, so since you never were all that into the band, I was wondering if I could get the copyright to the name from you. I'll pay you whatever you want for it.

Blockade Boy: You can have it. No charge. I'll have my lawyer visi-phone you.

Storm Boy: Sweet! So you're doing okay? You're having fun?

Blockade Boy: ...Yeah. I'm great! I gotta go, though. I have a whole big day planned.

Blockade Boy: Sure. Have a good one, fat-ass!

Storm Boy: Right back at ya, fat-ass! Seeya.

*Blockade Boy deactivates visi-phone function, then hurls interbloggamunicator against a boulder. It bounces off, unharmed. He picks it up again, and stalks off into the jungle.*
Posted by Jeremy Rizza at 10:40 AM 7 comments:

Y'know, it's nice having this resort nearby. For instance, when I get tired of eating 100% organic food -- by which I mean, "anything that can't outrun me" -- I can always wait until everybody is asleep; scale the outside of the building like it's a big, craggy rock; smash my way through the plasti-glass windows; and raid their honor bars. And then I might follow that up with some skinnydippin' in the resort pool. And sure, the next morning everybody's all pissed-off about how their food is missing, and all the rich people's bodyguards are fighting with the hotel manager's bodyguards, and there's an unaccountable mass of honey-brown "back hair" keeping all the swimmers at bay, but I just peer at their dumb clothes-wearing bodies through the foliage and I laugh my fucking head off!

Well, I'd better search through my pre-loaded comics panels on my hand-held interbloggamunicator, to find something suitable for blogging... hmm... nope. Nope. Maybe. Nope. Oh, that's filthy! I'll look at that one again, later. Nope. Ah! Here we go!

Please, don't touch the lesbians without permission, darling. Or else they'll cut you.

Or maybe I'm mistaken, and it's actually that one kid from "Million Dollar Listing." (Or as I like to call it, "Million Dollar Bowlcut.")
Posted by Jeremy Rizza at 7:13 AM 9 comments: 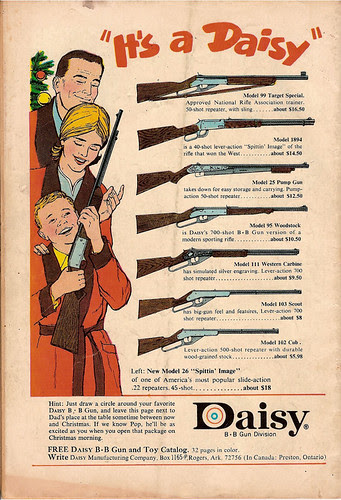 Especially when Junior realizes he's not getting those cha-cha heels he'd asked for.

(Nice matching robes, by the way. I wonder if all of Pop's wives and kids have to wear those, over at the compound? I hope not, 'cause it'll sure make it hard for the FBI to sort through all the bodies!)
Posted by Jeremy Rizza at 6:04 AM 7 comments:

My one-man corporate retreat is really helping me to relax! I decided to "kick it" (as Karate Kid likes to say) on the Planetoid of Peril. It features a five-star luxury hotel (the Citadel of Doom) but other than that shocking pink abomination? No other buildings. Anywhere. No, sir... it's nothin' but trees and deadly predators, as far as the eye can see!

Although I treasure my elaborate grooming rituals, it's been a pleasant break to live aw-hells-yeah-naturale out under the high blue sky, man. Just relaxing my mind and letting my beard and my pelt grow as wild as they darn well please; gorging my belly on berries and cacti juice and tubers and mushrooms and deadly predators; walkin' around all naked and nude (with no clothes on!); communicating only in grunts and howls; leaving my (big) footprints in the soft clay...! Occasionally, some venturesome tourist will snap my picture with their visi-phone -- usually while I'm in mid-shamble and my head is turned towards them -- but I do this trick where I shake my body a little at the last possible second, so the image is all out of focus. And then when my scent hits 'em, they topple over backwards in a faint, and I go over there and SMASH ALL THEIR STUFF! And then I might pee on 'em a little leave them a strongly-worded note. (Heh.)

So anyway, I'm living off the land right now, as simple as a Luddite. Except for my hand-held interbloggamunicator. I mean, I'm not an animal. So that's how I can relate the news from my friend at the Time Institute that your very favorite super-hero dimension -- the one where all the villains are psychotic mass-murderers; all the heroes are vicious, sniping, self-pitying crybabies; and half the population is lacking one or more of their limbs or eyeballs -- is about to absorb the Mighty (or "Archie") Comics dimension. It's a rare and beautiful timeological event! 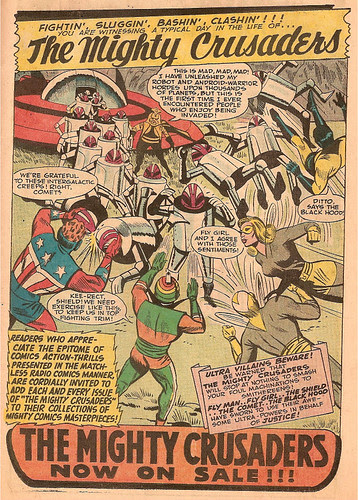 I'm guessing that means you all can look forward to a painfully-mutilated Shield, a sex-addicted Fly Girl, and a Comet who wets the bed. ("Kee-rect!") ENJOY!
Posted by Jeremy Rizza at 6:36 AM 10 comments:

But How Does He Smell? (Terrible!)

I hated to keep you in suspense -- since I already knew what would happen (me being from the future and all) -- but it's now safe to tell you that Jeremy's septum-correcting surgery was a smashing success! He didn't feel any pain. Not that he'd admit it, since he's a total bad-ass, or at least, that's what he tells people. And after a couple of nights at his sister's house and some bowls of homemade chicken noodle soup, he's doing pretty darned well! He just isn't allowed to blow his nose for a week. Or else the fool thing just falls right off, I guess. Also, he can't lift anything heavier than twenty pounds for two weeks. Or is it two weeks on the nose-blowing and one week on the heavy lifting?

Let's see some photos of him, before and after the surgery! 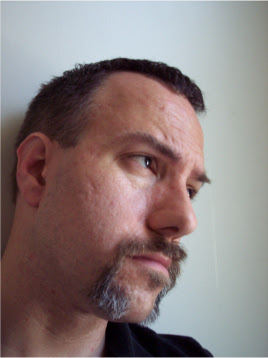 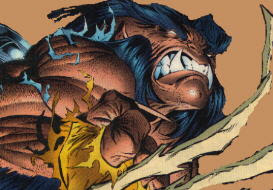 Yipes stripes. I hope he has a good lawyer!
Posted by Jeremy Rizza at 1:09 PM 11 comments: