And Now, a Heart-Warming Tableau 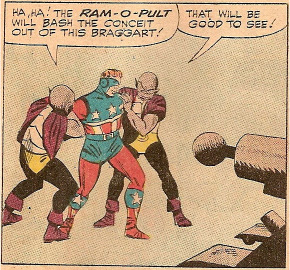 Alien Super-Villain One: Indeed! Our people shall rejoice when they behold-- wait. You're being sarcastic again, aren't you?

Alien Super-Villain Two: NO, Dad, I'm seriously pumped about spending "quality time" with you. This is way better than hangin' out at the Olympus Mons Galleria with my friends.

A S-V 1: Still thy tongue, stripling!

A S-V 2: Yeah? How's about you suck it, old man? 'Cause I could honestly give a shit about helping you kill this alien dough-ball here.

A S-V 1: Have you no sense of history, boy? For millennia, have our proud ancestors imposed our singular will upon trembling galaxies, and...

A S-V 2: Screw that shit! What about my dreams?

A S-V 1: What "dreams" would those be? I don't see you working towards anything! Unless you're in training for the "Napping and Acting Sullen Olympics."

A S-V 2: They don't even hold that event anymore and you know it, Dad! By the Emerald Void of K'thglz, you're so fucking lame!

A S-V 1: HEY! YOU DON'T TALK TO ME LIKE THAT! You know what? That's it. You're grounded. No hover-biking for seventeen solar-cycles.

A S-V 1: Nope! This is final! And don't even think about whining to your mother about it. I'm not changing my mind.

Do You Think the Punisher Would Pull This Crap? 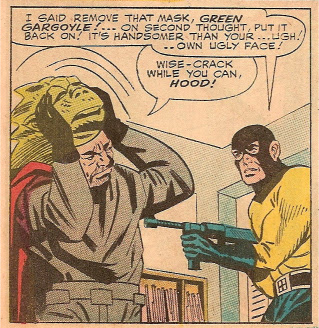 Because I'm thinking not.

Oh, but the Black Hood pulls this crap. All the time. Because he's a petty, miserable little fucker.

So, it turns out that your boring dimension has its own super-hero after all...! And unlike that "Superboy-Prime" goober? He's cool.

His codename is "The Crimson Fist" and here's how balls-punchingly cool he is: he contacted yours truly about designing a costume for him! (For money!) It doesn't get much cooler than that, people.

Designing a costume for your dimension presented some unique challenges. For instance, I had to go easy on any parts that could be grabbed onto during a scrap (like capes and hoods and such). Why? Because you fuckers fight dirty! It sure ain't that way where I live! In my dimension, if I'm wrestling with some (other) burly dude, and he touches grabs my glorious beard? I know exactly what he's asking for, and it ain't a sock to the jaw. Er, but I digress. 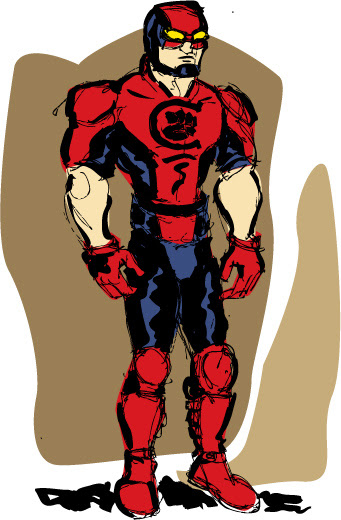 This design features body armor, based on the kind used by dirtbike enthusiasts and, I dunno, cops or sumpin'. Note the protective collar, which comes in handy when some jerk tries to stab you in the back of the neck. Which, I guess, happens where you shmoes live. The cowl has integrated lenses. The buckled boots are combined with kneepads. As a design element, I left the forearms bare. So I guess it's not 100% practical, but hey! I'm an artist. 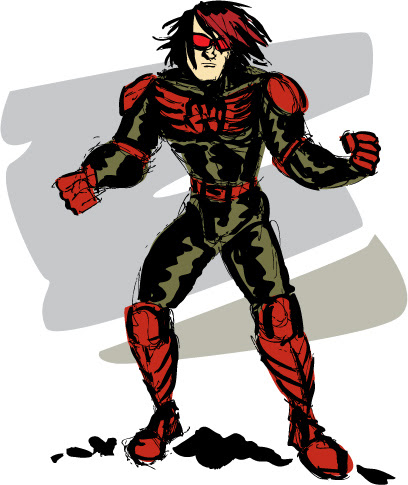 This next one would be suitable for riding a motorcycle. Just add helmet! I surrounded the fist logo with stylized wings for additional bad-assery. I mirrored the wing pattern on the boots. I went a little Anime in the hair, for fun.

I actually doodled around with a full-on Japanese hero look for the Crimson Fist: armored pants, metal girdle, bare nipples, fun little vest. It made him look like he was one of those twee Final Fantasy characters (not that there's anything wrong with that), and it didn't exactly scream "tough". But I guess I had to go that far, in order to dial it back down to this design. It's my personal favorite!

But the Crimson Fist prefers this third one, and I can't say as I blame him: 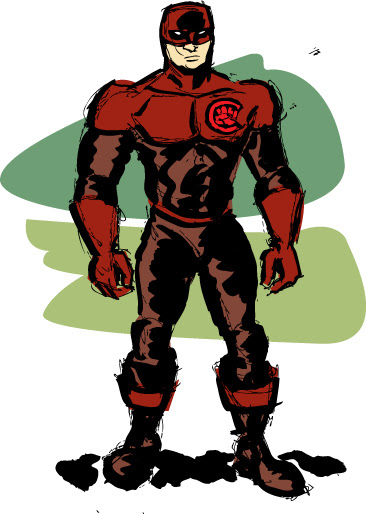 This design is clean and classic, with a good balance of color and silhouette. It looks the most like a 21st century super-hero from my own dimension, but it was still designed with practicality in mind. For instance, there is a definite top layer and bottom layer. The tunic is bordered with red at the hem, and it's pulled over the leggings. The boots and the gloves are both pull-ons; you'll note that they are drawn as fitting more loosely than the buckled versions in the other two designs. I'll be producing an illustration -- using this design -- for the Crimson Fist! 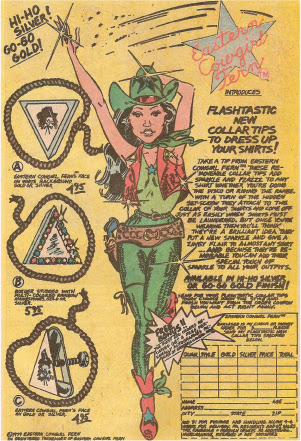 Luring wine-soaked businessmen to their dooms as you writhe onstage to ZZ Top; stretching your lanky legs into configurations few thought possible; ruthlessly abrading the metal pole with the scales on your stretchpants; insouciantly tossing your collar tips to select "rough-riders" whom you'll meet later, and secretly; dazzling the crowds with the strobe-light concealed within the ludicrously-tall crown of your cowgirl hat; smiling only seldom, because of your embarrassing overbite; ignoring the numbness in your feet after cinching your "ankle bandana" too tightly; doggedly removing all alcohol and bodily fluids from your tiny daughter's pageant vest before placing it back in her closet right before she awakens (for she must never know how the two of you can afford to live in this respectable brownstone -- that is your solemn vow)...!

Oh, Eastern Cowgirl Fern... why do you fascinate me so?

I Want a New Rug 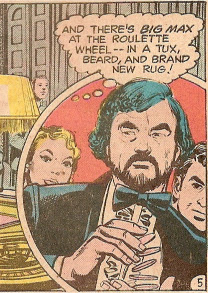 ...Since he's splurged on new fake hair for himself, do you think Big Max went in for a fresh merkin as well? I've heard that some of the more leonine body hairs that I shed eventually wind up in those things. I don't even mind! I call it "sharing the wealth." Wear 'em in good health, boys!
Posted by Jeremy Rizza at 6:26 AM 6 comments: