Too Hot To Handlebar 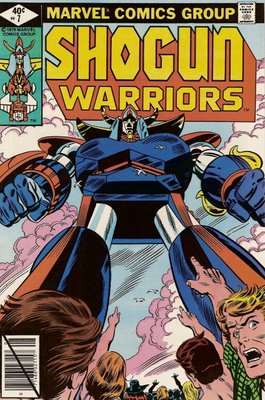 "Its giant crotch will kill us all!!!" 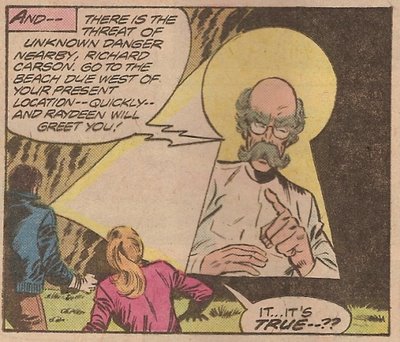 Scientists have them, of course. This fellow has the biggest, grandest handlebar mustache in the "Shogun Warriors" comic -- it's the Alpha 'Stache, if you will. It's so brawny, I'd love to see it in a steel cage match against Egg-Fu's mustache! Even if it lost, it would put up one helluva fight.

Movie directors have handlebar mustaches! I suppose that's logical; the eccentricities of artists are often indulged, or at least tolerated. Fun fact: when Jeremy was in high school, a TV movie was filmed in his hometown. ("The Parade," starring Rosanna Arquette and Maxwell Caulfield. That one guy from Toto showed up to visit!) The director, no lie, wore a safari outfit with a pith helmet the whole time. 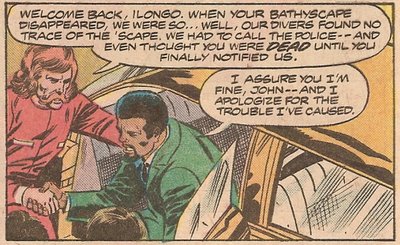 What th'? Even the parking valets have handlebar mustaches! Are you freaking kidding me? I'm sorry; I'm just not buying that one.

So what's going on here? I have a theory. The penciller is Herb Trimpe, a middling-to-downright-crappy artist who managed to eke out a career at Marvel by doing a Jack Kirby imitation (just like his co-worker, Ron "Marvel Two-In-One" Wilson). Therefore he uses a lot of Kirby motifs, including Dum-Dum Dugan's facial hair, even when it's completely outdated and nonsensical. But he got a lot of work doing it, up 'til the early 80's.

Epilogue: unless I dreamed this, I could have sworn I saw a Marvel comic in the late 90's that was pencilled by Herb Trimpe -- but this time he was doing an imitation of Rob Liefeld.

It was the most depressing thing I'd ever seen.
Posted by Jeremy Rizza at 6:48 AM 7 comments:

So I bought the first issue of the new Eternals comic yesterday. And I used one of Jeremy's credit cards, which means I also treated myself to a pedicure and a massage and brunch at a nice restaurant. Really, I made a whole day of it! Anyway, when I saw John Romita Jr.'s depiction of Sersi, with the Suzanne Somers bangs and the great wads of mascara, I suffered a flashback to my very own Vietnam -- namely the X-Men comics he drew over twenty years ago! The feminine portion of the X-Men have always been burdened with god-awful costumes, and Junior was responsible for more than his share. How many different costumes did he design just for Rogue? Twenty? Three hundred? And each was fuglier than the last. That's quite an accomplishment. Let's take a glance at a few frightful designs from John Romita, Jr.'s Galleria of Horrors. 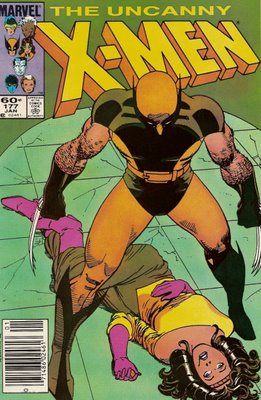 (From "The Uncanny X-Men" #177, January 1984.) You think my fashion criticism can be merciless? At least I don't kill people. I wonder if Wolverine dispatched her with an 80's movie-style quip, like "Disco is dead. *snikt* And so are you."

To be perfectly honest, this isn't Wolverine; it's Mystique. And it isn't Kitty Pryde, either; it's one of Arcade's Murderworld robots. So I don't know if Kitty really had an outfit like that, or if it's something a guy in an oversize novelty bowtie thinks she might wear. (He's right on the money if you ask me.)

Oh, and inside the comic the costume is colored a reasonably tasteful blue-and-white. But yellow, magenta and brown is also a fine combination. If you're a chocolate cupcake. 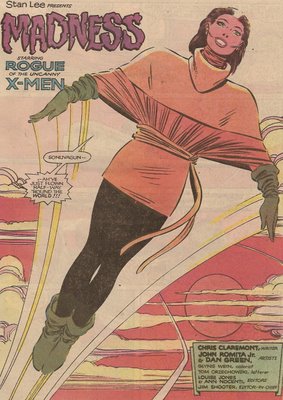 (From "The Uncanny X-Men" #282, June 1984.) It's Rogue-y the Flying Squirrel! I suppose that blinding orange is to keep hunters from shooting at her. How do you know when a woman doesn't like people to touch her? When she's wearing a cowl neck over a turtleneck. It makes her sweater look like it's been circumcized. This ensemble also features two of Romita The Lesser's favorite things, like, ever: tights and a sash. Lotta tights in the 80's X-Men comics. Ditto for sashes. This sash isn't as brazenly huge as a Dave Cockrum sash, but it's still grandly pointless. The down side? If Rogue flies backwards it snaps up and smacks her in the kisser. Although she's really kind of asking for it.

Wait a gol-dang minute... I thought Rachel had a buzzcut! What's with the sensible "farm wife" 'do? Is this a continuity error? Nope! It's all a hallucination. 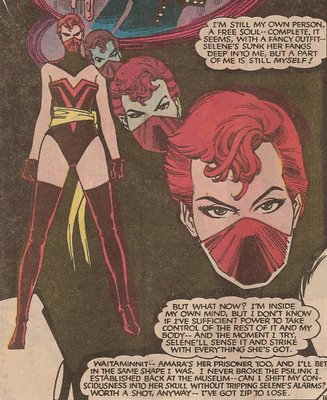 See, this is what Rachel dreams of wearing. Kind of like how Jeremy dreams of having a 32" waist. Can somebody explain the sash to me? Because I don't understand the point of it. At least on Rogue's get-up it cinched that gargantuan sweater she was wearing and gave her an hourglass figure, but with Rachel the color doesn't coordinate and it interrupts the lines on her bodice without providing an interesting contrast to them. In fact, it's like she doesn't even realize she's wearing it. Maybe it's police tape, and her vagina is a crime scene.

That concludes our tour of the Galleria. The exit is to your left, and please take care not to slip in the vomit of your fellow patrons as you leave. Good day to you all!
Posted by Jeremy Rizza at 6:07 AM 15 comments:

Any additions or corrections will be welcomed with open arms.
Posted by Jeremy Rizza at 5:29 AM 5 comments: 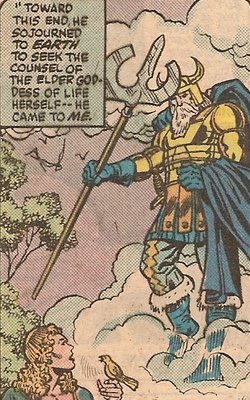 Fashion in Asgard is anything but subtle. And Asgard's ruler, Odin, is probably the flashiest dresser of them all! The above image doesn't really do him justice, but it's from one of the few comics Jeremy owns with Odin in it. Still, I clearly remember some Jack Kirby panels that showed the Big Pimpin' All-Father sprawled on his throne with a godly grimace on his whiskery puss as he was slowly crushed to death beneath a massive helmet that looked like a wedding cake crossed with a jet engine. I puzzled over how Odin might dress when he wanted to relax. Three-foot-tall platform moccasins, perhaps? Or a terrycloth robe with a twenty-foot train and a big finned collar? I honestly couldn't picture it. So, you can imagine my surprise when I thumbed through Jeremy's copy of "Die Spinne" #23, a collection of Marvel reprints published by der Condor-Verlagsgruppe in Germany back in the 80's. I don't know why Jeremy even has this comic, considering he doesn't speak German, the ignorant American pig. Okay, I can't speak it either but I'm from the future where the only languages are English and Interlac (which is just English with a cooler font) so I have an excuse and Jeremy doesn't, so there. Anyway, the back-up to this Teutonic "Amazing Spider-Man" reprint was a partial reprinting of "Thor" #236. And there to my wondering eyes was Odin himself, looking remarkably like... "The Dukes Of Hazzard's" Denver Pyle. 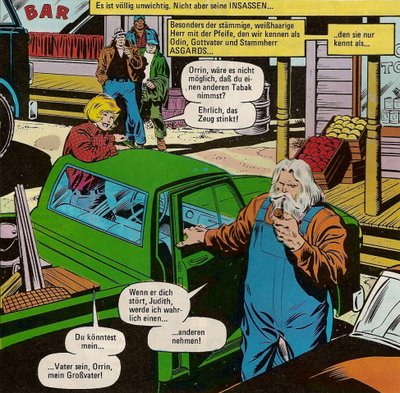 And in this corner, facing off against Triple H, it's Man-Mountain Grampa! I have to say, overalls are probably the best bet for Odin. Lord only knows how his vaunted Odinpower would have wreaked havoc on a belt. The pipe is a nice touch. It makes him look like Santa Claus -- a Santa Claus with a serious pituitary defect, but still--! So it's a very accessible look. Very approachable. I want to climb on his lap and tell him all my wishes! Of course, there is such a thing as "too approachable" but Odin knows how to handle the touchy-feely types.

Kick their asses, Santa! You may have noticed that Odin has used his special power of changing an assailant's race -- just by touching them! This insures that his attacker will face a stiffer sentence for the exact same crime. Odin's no fool. But the best part is, he barely looks put out by all those redneck idiots swarming all over him. I don't think he's even paying attention to the matter at hand. I wonder what he's thinkin' about. 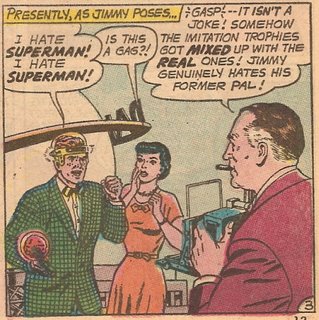 Next Jimmy's headed to the Byrne boards to really start some shit!

Everyone's favorite boneheaded, er, redheaded cub reporter has donned "The Helmet of Hate!" -- which is also the title of this reprint story from "Jimmy Olsen" #113 (Aug.-Sept. 1968). Like a lot of Superman Family stories from its era, it's filled with so many SHOCKING TWISTS and STARTLING REVELATIONS that it chokes on them, and dies an exceedingly moronic death. The primary plot element here is deception. Sure, the reader thinks one thing is going on, but it's actually something entirely different! And they'll explain with excruciating detail how everything was done! I wonder sometimes if the Superman comics were edited by Julius Schwartz or the Amazing Randi. (The closest modern example I can think of is the first couple years of the JSA comic, in which every seemingly unbeatable villain had a fatal Achilles heel -- which the JSA knew about all along! Or any Warren Ellis/Garth Ennis/Mark Millar story where the "hero" is a deceitful wiseass.)

Suffice it to say that everything that seems to be happening to Jimmy and Superman is all a ruse in order to foil an alien invasion. Got it? Swell. Now I'm free to talk fashion!

About that helmet -- I'm not sure why so many sci-fi helmets from the 50's and 60's were transparent. You'd have to make sure your hair was flawless before you put it on -- and then the weight of the helmet would smoosh it down. So you'd be screwed! The Hate Helmet doesn't seem as bad, since the glass or what-have-you is kept away from the top of your coif -- as long as you keep your hair reasonably close to your scalp. A pompadour might be a bad idea. And just imagine the grease marks all over the glass!

But Jimmy didn't just accessorize with a Hate Helmet. He's also brandishing a red Kryptonite gun! Or is he? ...Okay, he's not. Hope that doesn't spoil the story for you. 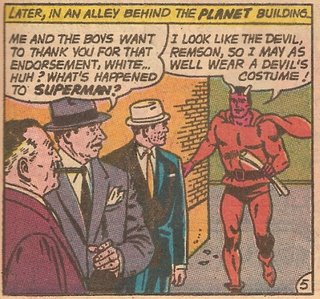 Uh-oh! The red-K has turned Superman into a devil! Not! That costume looks kind of familiar, doesn't it? I'm guessing he popped into the Phantom Zone and borrowed Mon-El's tunic.

Mon-El: Superman! At last, you've come to free me from this dreadful prison!

Superman: Um... yes! That's precisely why I'm here! But you'll have to remove your top first.

Superman: I'll need a sample of your clothing in order to match your exact molecular frequency. So hurry up and get nude.

Mon-El: I've got a button here that popped loose. Can't you just take that instead of the entire tunic?

Superman: Oh, I'm sorry, Mon-El, I thought you were serious about wanting to get out of here. But obviously you'd rather stay in the Phantom Zone getting phantom dry-humped by General Zod than enjoy untold freedom in the outside world. Tell you what -- when you grow the fuck up and decide to act like a man, you give me a call. 'Kay? Bye.

Superman [snatches the tunic from Mon-El's hands]: Yoink! See you in 990 years, sucker! [he vanishes] 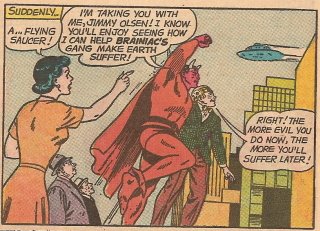 Hey, pixie boots! I didn't even know they made shoes like that in Superman's size. He really went all-out on this devil costume! For him, I mean. I don't hold Superman to an especially high standard when it comes to costume design. I would have spruced it up with some nice gauntlets, maybe with talons on them, and a much longer and nicer cape. Or a cloak! I just watched Michael Powell's "The Tales Of Hoffman" this weekend, and I think Leonide Massine's "Schlemil" costume in a shade of crimson would have been nice as well. It was a military number with these big silver hawks or owls or something on the shoulders. Very striking. Superman could have used bats instead, or some kind of lame-ass Kryptonian fauna that only some nerdy loser would be familiar with. Like a rondor! (Oops.) And now for the shocking conclusion! 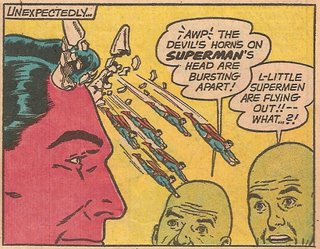 Oh, for--! Now he'll never be able to return those things to Hot Topic.
Posted by Jeremy Rizza at 6:03 AM 9 comments: