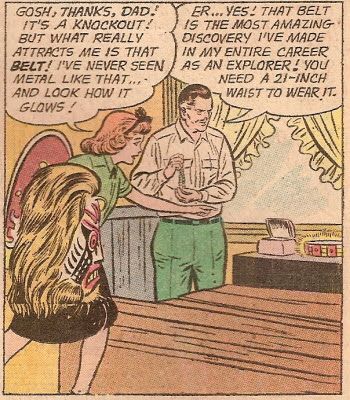 Lana Lang is offered a classic strand of pearls to wear but she opts instead for a garish, glowing, red-and-yellow belt. This proves to me something I've always suspected: if there had been magenta halter tops emblazoned with rhinestones spelling out the word "WHORE" in 1961 Smallville? Lana would have bought three. 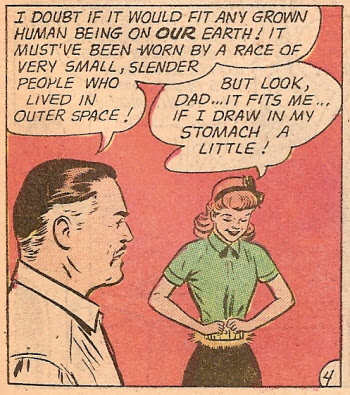 "...A race of very small, slender people who lived in outer space!" Ah, the Kucinich people of Rossperot 9. Nice folks, if a bit talkative, plus you have to try and ignore the "crazy eyes". There's a legend that some of them tried (unsuccessfully) to take over the United States in the late 20th/early 21st century. But of course, such an idea is preposterous.

And of course the belt fits Lana. She's been subsisting on nothing but coffee and soda crackers since 1958! Because she's sure that if she can only get skinny enough, Superboy will finally commit to a relationship! (Sorry, hon, but you'll have to get past Pete Ross first.) 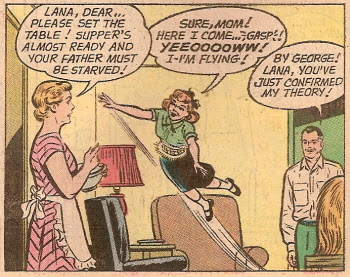 You're not flying, Lana. It's just that you've lost so much bodily mass that Earth's gravity no longer has any effect on you. (You're going to be doing a lot more of that "*gasp* YEEOOOOWW!" crap once you hit the ionosphere.)
Posted by Jeremy Rizza at 5:49 PM 11 comments: 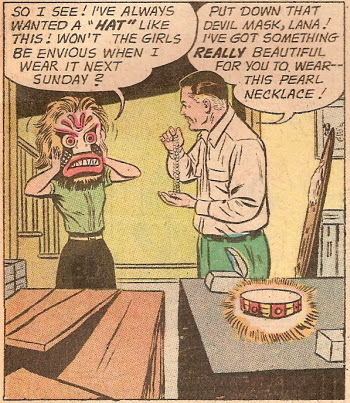 Lana wants to take the mask along when she and the other girls of the Smallville High School Auxiliary Welcome Wagon visit that nice "colored" family that moved to town.

(Notice how I'm avoiding the "pearl necklace" joke inherent in this panel. You're welcome.)
Posted by Jeremy Rizza at 5:25 AM 9 comments: 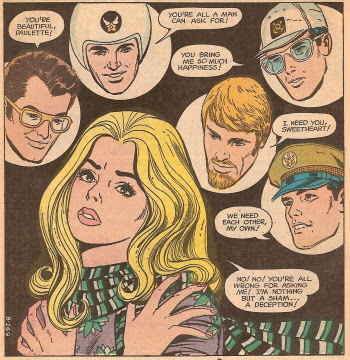 *ahem* Well? ...Redheaded guy, third bubble from the left, next to the moon-faced blonde gal? No? Seriously? Oh, COME ON--!

It's me, motherfuckers! From back when I looked like this. I remember that day. I'd decided that morning that I'd try growing a mustache. It was coming in pretty good by 11 AM. By 4 PM it was Sam Elliott-sized, and then I got sick of it and shaved it back off. Anyhow. You might think the above panel is some sort of symbolic mental montage, but it most assuredly ain't. Nope! Y'see, Blondie up there lives in Central City, where the impossible vastness of the streets necessitated the invention of tesseract-based communication. Telephones? Those antiquated devices are decidedly out in Central City. It would take twelve days for the signal to cover the distance of even one city block! And cell phones--? Not that they had been invented yet, but feh! Feh, I say to you now. All the phones would need those giant CETI dishes on top just to capture the weakened signals. Forget it, brother! Tesseracts are the way to go. Want to talk to somebody? Just open up one of these miniature gloryholes wormholes and stick your head right through! It's easy! Although it gives a sinister "third dimension" to obscene calls, if you know what I mean.

So, the lady with all the dirt and grit in her hair (seriously, what is that crap?) thinks all these swingin' young squares are macking on her. If she would have let me finish talking (instead of flipping the fuck out) she would have heard my full sentence as "I need you, sweetheart, to tell me where all the best boutiques are!" Because I had some hand-made jewelry I was going to try to sell. And for some reason, the only guys in 1971 who were interested in huge chunky orange-and-purple jewelry were the ones without any money. So I thought I'd try the chick market instead. But it never worked out, because somehow I managed to get in a screaming match with every boutique owner in town.

It's Curtains, For Sure 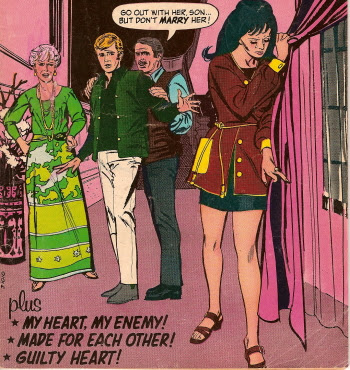 In this thrilling issue of "Valerie Valance: Drapery Inspector" Valerie encounters intrigue and romance while investigating the window treatments of Barbie's Dream House. It's a dangerous mission, requiring stealth, but with some quick thinking she altered her jacket so she resembles one of those little cinched-up cloth pouches they use for expensive bottles of liquor. But will her ruse be discovered by her arch enemies, Ventriloquisto (and his life-sized Boy Toy) and Orthographica, the Woman of a Thousand Map-Print Dresses (she's sporting one of Krypton for this special occasion)?

(The beauty of the actual cover? The text over the picture, which I trimmed out so as to make the image larger, reads "Kiss me... hold me... but don't ever love me! I'm ruined for any boy! My father saw to that! Read: LIKE FATHER... LIKE DAUGHTER!" Which led me to believe the old guy cautioning and fondling the prospective beau was the girl's father and not the boy's. Which is incorrect, but you have to admit it would make for a more interesting story.)
Posted by Jeremy Rizza at 5:28 AM 1 comment:

Nipples Are for Pussies Then Jimmy turns around and she sees he has no nipples and she throws herself screaming off the nearest pier.

Just kiddin'! Jimmy knows that most women prefer their men to have smooth, hairless, feminine bodies. That's why he gets his chest waxed! But first and foremost, Jimmy is a man. A man's man. So when his latest round of waxing pulled his nipples right off, Jimmy didn't so much as grit his teeth! Because that would be a sign of weakness. And does he cover up his curious amputation? HELL NO. Because that unlicensed and probably illegal Brazilian waxer had played right into Jimmy's hands! Because Jimmy's been around. And Jimmy knows. If the ladies love a hairless chest, they'll go apeshit over a chest with no hair and no nipples! Finally, Jimmy's vast, rotating coterie of girlfriends can run their busy fingers over his slab-like body without hitting the "speedbumps" as they used to call them. No, it's "smooth sailing" for old Jimmy Banion from here on in.

The Scourge of the Underworld: if there's a lame-ass villain, he'll lamely assassinate him! Blue Streak: an evil rollerskating spy who dresses alternately like Evel Knievel or an immunodeficient baseball umpire! Their paths pretty much had to cross one day, huh? And so they did (in "Captain America" #318) when Blue Streak was forced to hitch-hike. (Lame!) And who, disguised as a trucker, offered him a ride? No, not me! Have you been paying attention at all?! Criminy.

So that was the end of Blue Streak, exactly one-hundred-and-one issues of "Captain America" after he was introduced. But did Blue Streak deserve to die? That's a rhetorical question, natch. You already know my answer. Which is "No, he didn't. Because there are no lame characters; there are only lame writers." I think the idea of an evil rollerskating spy is just dandy in the proper context. And "Captain America" is not the proper context. "Rocky and Bullwinkle"? You bet! I think Blue Streak's basic concept just needed a little tweaking to make him a decent Captain America villain. Get rid of the roller skates and just concentrate on his being a super-fast evil spy and "wham-bam, thank you, Weight Wizard" you have a great start.

Blue Streak was a redheaded guy, real name unknown, who got his superpowers from technology. First it was just a pair of amped-up skates. Then he upgraded to better skates, a suit that protected him from friction burns (quiet, Scipio), a laser, and caltrops (spiked jacks). Which was fine, sort of, except he was still getting around on skates and the new suit didn't look any cooler. It just looked differently goofy. I say he could have upgraded again to the comic book science equivalent of "a wizard did it": nanites! Sure, why not? I think he could have used nano-robots to bestow super-speed upon himself, along with a fancy blue frictionless "skin." And since he was a redhead, maybe he had some Celts in his family history. So maybe his villainous look could have been based on the blue-painted Celtic warriors who fought the Romans! If I recall correctly, the Celts also did something to their hair to make it spikier and more horrifying. (And a lot of them had big mustaches, which isn't necessarily scary but I thought I'd better point it out before I showed you the picture.) So Blue Streak could have resembled a stylized Blue Celt. 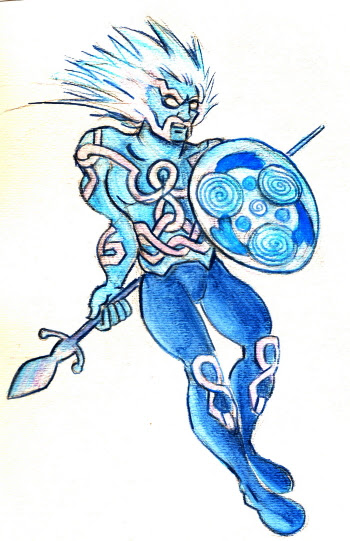 The tattoos could glow, if you're into that sort of thing. And the facial tattoos symbolizing a mustache and eyebrows (y'know, like Little Richard has) are meant to be Kirbyesque. With the hair, it makes him look more than a little like Lobo. Which wasn't on purpose, since I honestly can't stand Lobo. Of course, I was well into this design before I realized that blue + spiky hair + really fast = Sonic the Hedgehog. So what, I say. SO WHAT! Er, anyway, his weapons could have been replicas of a Celtic spear and shield ('cause he was a Cap villain) that were made of energy. And for a power limitation, maybe he could only have manifested the spear and shield when he wasn't accessing his superspeed. Yeah, that's the ticket.

The Many Loves of Jim Shooter

(My "Rescue Me" for the Blue Streak is humming along, albeit slowly, and it's all drawn up and I think my take on him is NEW and SHOCKING and UNLIKE ANYTHING THAT'S EVER BEEN DONE BEFORE... with Blue Streak anyhow, but I won't be able to get around to the watercolor-and-ink stage until tonight. Dagnabbit. No, wait, this latest outrage really requires my cyber-throat to be in pirate mode. *click* ACCURSED BE THE LIFE O' A SPACE PIRATE CAPTAIN!!! BY THE GASEOUS SEAS OF NEPTUNE ITSELF DO I MAKE THIS VOW... ONE DARK DAY THE MOTLEY ROGUES WHO PLAGUE THIS DEMON SHIP'LL DRIVE OL' BRIGADIER BLOCKADE TO THE DEPTHS O' MADNESS, AND THERE'LL COME SUCH A ROUND O' FIRINGS AND LAYOFFS THE H.M.S. EXQUISITE WILL MAKE THE MARIE CELESTE LOOK LIKE A BLOODY CARNIVAL CRUISE VACATION!!! *click* Well, I'd better hurry this along, huh? I've got another human resources meeting in five minutes.) In this panel from the all-Jim Shooter romance comic, "Downsize My Heart," the gruff yet noble Jim (he's a modern-day Jane Austin hero!) consoles his sensitive X-Men editor, Louise Jones. Oh, why did she have to marry the flashy Walt Simonson instead? Why?! Is it Jim's shiny, immobile motorcycle helmet of hair? Probably.

Now let's see an excerpt from another story in which Jim speaks with his sultry assistant about setting up a lunch meeting with all-star Brit penciler, Alan Davis... 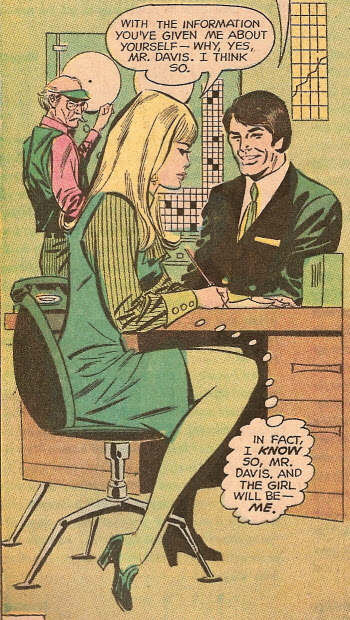 Not unluckily, she thinks Jim wants her to arrange a three-way.

In the background, Al Milgrom seethes with jealousy.
Posted by Jeremy Rizza at 6:12 AM 7 comments:

(...And Across Town, the Nose is Discovered Within a Loaf of Bread)

This week's redesign post is a "Rescue Me" for the Blue Streak but it will have to wait until tomorrow. In the meantime, please enjoy this. No, please.

"Are you bothered by a beak-like protrusion in the middle of your face? We have a formula that can make it vanish completely!" Just try not to make eye contact with this bewitching alien creature. Because she'll devour your soul. And then later she'll stick her finger down one of her throats and throw it right back up again but you really won't want it at that point.