I'll be taking a short break from posting since -- due to a deeply disturbing coincidence -- Jeremy and I will be touring the exact same laminate flooring plant at the exact same time. (And the fact that this is my second consecutive absence involving laminate flooring just makes the whole thing even creepier.) Bottom line? Posting will resume on Monday.

Jeremy has to go on this plant tour as part of his job. I, on the other hand, am doing it for charity. It seems the fondest wish of a little girl with lukemia is to travel in a helicopter to a laminate flooring plant with Power Man, Iron Fist, and myself. I guess she really likes this blog! I'm not great with kids, but I'll bring along some Japanese fashion mags to keep her occupied. 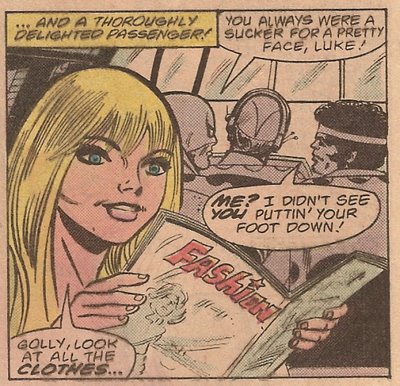 Two decades before "The Janice Dickinson Modeling Agency" and "Project Runway," the dark side of the fashion world could be found within the pages of "Detective Comics" #506 and #507 (September and October, 1981). In those issues, the Dark Knight squared off against the Manikin, a statuesque fashion model with a burn-scarred noggin and an exoskeleton... 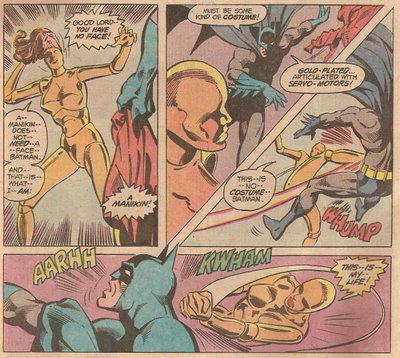 ...an exoskeleton plated in genny-wine gold! 'Cause it's classier that way! It's certainly Trumpier! But you know what would have made it even better? If it had been Faberge! All crusty with jewells and enamel and crap. And if you could order it from the Franklin Mint. But here's the weird thing about this scene: a few panels before this, the Manikin was wearing a floor-length gown, cinched at the waist, with long sleeves. And Batman somehow managed to pull it off her, over her head, while she was punching him in the face. I guess that's a skill he picked up in his "Bruce Wayne" identity. 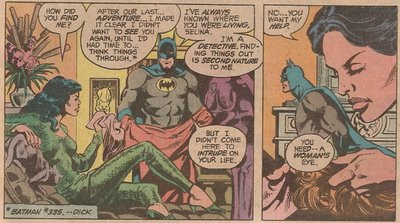 As part of his investigation, Batman shows up unannounced (as is his wont)at the apartment of Catwoman. He finds her all dolled up for her Aquaman fantasy session with Dane Dorrance. Oh wait, Frank Miller hadn't retconned her into a former prostitute yet. My bad. I'll start over.

He finds her chilling in her sequined pajamas and casual lounging heels. Take a look at the floral arrangement. Cattails! Oh, for... give it a rest, woman. 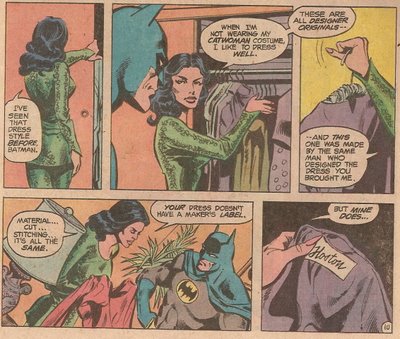 "When I'm not wearing my Catwoman costume, I like to dress well." But if she thinks her costume is tacky, then why does she wear -- gah! It's Gerry Conway logic; I'm not going to waste time trying to think about it. Just like I'm going to stifle my disbelief that she could identify the maker of that dress so quickly.

Batman uses this info to track down the Manikin's next victim, "Hoston." I love his Fruit Pies! (And that's the least dirty-sounding Hostess product I could think of for that joke. I just wanted to make a joke on his name, but it keeps unintentionally veering into Sex Country. But I guess "Fruit Pies" is marginally cleaner than the alternative. Twinkies, Ding-Dongs, Sno-balls... they're all filthy! ...That's what she said.) 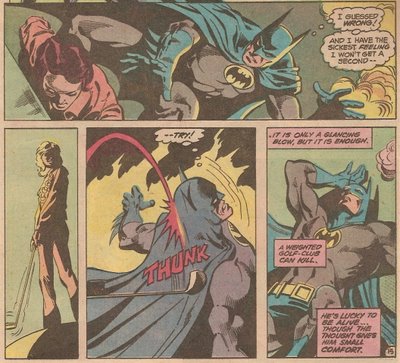 Here's how you know it's pre-Crisis Batman: "I guessed wrong!"

I also like this part: "A weighted golf-club can kill." This message brought to you by the Coalition Against Weighted Golf-Clubs.

The Manikin only hospitalizes Hoston (good job, Batman!) but then she decides to show up there and finish him off. Luckily, Batman has a brilliant plan.

"The Brave And The Bold" presents: Batman and Tom Selleck's Mustache! What an awesome crime-fighting team! Batman... seriously. Dude. That's it? That all you got? Not even a curly blonde wig or some big Charles Nelson Reilly glasses? I'm severely disappointed in you.

You could have at least made it a handlebar.
Posted by Jeremy Rizza at 6:15 AM 13 comments:

The other day I asked Jeremy just what the hell he was thinking when he bought "Oblivion" #1 (Comico, August 1995). He just shrugged and said, "Art Adams cover." I thwacked him on his forehead with my thumb and forefinger and asked him if he'd even glanced at the interior before he'd bought it. He said "No." So of then course I had to punch him in the arm really hard. But he didn't even flinch, the l'il trooper!

Well, it doesn't surprise me that Jeremy didn't look through "Oblivion" before he bought it. "Oblivion" is a comic about perfectly awful people doing perfectly awful things to one another, and Jeremy only likes that on reality TV. Okay, so he used to enjoy Warren Ellis but he got sick of that guy about five years ago. And "Oblivion" author Jack Herman is no Warren Ellis.

But of course, what I find most offensive about this comic is the costuming.

While I applaud the idea of a gold-plated handgun to go with gold satin boots, I'm just not buying this as a military uniform. Winged knees do not authority confer. (I think Sun Tzu said that.) Then there's the busty chest plate, which lifts and separates the holy hell out of her breasts. Doesn't look comfortable. And I'm pretty sure she stole the facemask thingie from 90's-era Jean Grey. Do you think the collar is a mite wide? The guys in this comic get even wider collars. Their heads are practically swimming in the damn things. I bet penciller Andrew Dimitt had a problem with people touching him on the neck.

Oh, come freakin' on. How long does it take these women to get suited up for battle? Three hours? I remember an old "Project Runway" episode where some guy had designed a swimsuit with less straps than this and neither he nor his model could remember how to even get into it the second time. Plus, you have to love how after all that strappy foofarah there's still several square yards of skin exposed. Well, at least their knees are well protected, huh? 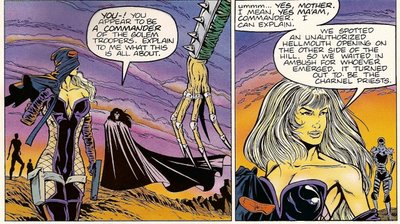 Of course she's the commander. Isn't fishnet the universal symbol of leadership? You can't see it in these panels, but the fishnet is also the only thing covering her ass. Aaaannnd the whole get-up is backless! Jibbidy. You know what I'd like to see? A remake of "Gettysburg" where all the combatants are clad only in leather jockstraps. And their preparation for the big battle would involve a lot of scented oils.

But wait! "Oblivion" finds other ways to objectify the female body! 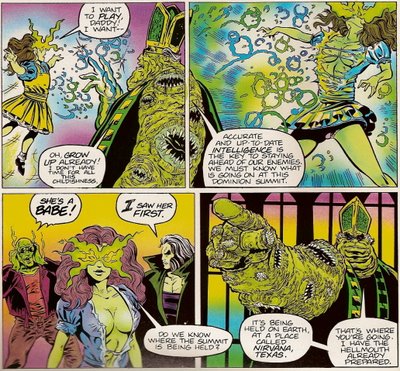 If they'd only stay little 'til their Carters wore out, huh? Osh-Kosh B'HOLY SHIT! And what precisely is keeping her breasts inside that thing? Is it just exceptionally cold in there or what? And the even stupider part is, she's still in the same dress in a battle scene at another location later on in the comic. Yipes.

I want to personally bitchslap every single person involved with this comic. Even Bill Willingham, who created some of the characters but had absolutely nothing to do with the actual production of this particular issue. Just because I like to be thorough. I might have to bitchslap all the people who worked at the printing plant and the distributor and the UPS drivers who delivered the comics. And then the people who worked at the comic book stores that sold it.

Sure, it could take a while, but it will be totally worth it.
Posted by Jeremy Rizza at 6:20 AM 7 comments: