Shams From a Marriage

In "Marvel Spotlight" #10, the Unipower imposes itself on twin sisters, who must track down both the masked crime boss "Nemesis" and one sister's kidnapped husband. Clare is a detective and your basic no-nonsense brawler, while Ann invests her superheroics with a decidedly domestic touch. 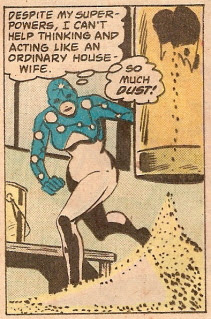 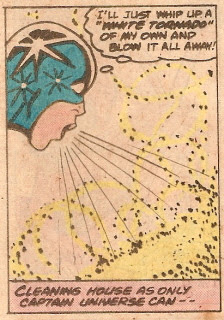 Hey, wait a minute! It's 1981 and somebody's exhaling on a fine, powdery substance? What is this, Bizarro World? 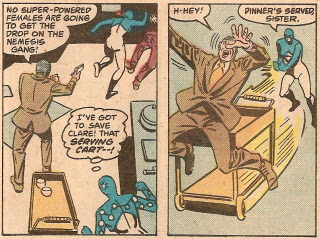 The last time I saw a man getting wheeled around on a dinner cart it was Element Lad's birthday supper. ("May I tempt you with a little dessert?" purred Invisible Kid. He was nude save for a big dollop of whipped cream covering his privates. But I said no, because my eyes were on Star Boy, who was digging beneath his collar to scratch at his ever-increasing thatch of chest hair. Mark my words, that fellow will be magnificently furry some day. I've often recommended he grow a beard. So far he's declined but I can tell he's considering it.) 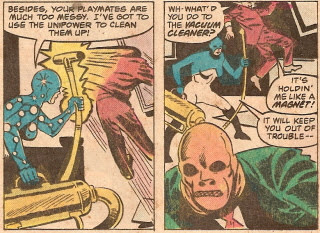 Wow, an ass-vacuum! Who would opt for one of those messy enemas when they had one of these babies on hand? I could make a mint selling this device. Thanks for the idea, Mister Mantlo!

And now for the tear-soaked conclusion! On page three of this comic, Ann's hubby (District Attorney Edward Stanford) was pushed into a car by some wiseguys. When Edward demanded to know who was responsible for his kidnapping, one of the gangsters replied "...Our boss! He left instructions for us to pick you up if the trial went the wrong way!"

So you can imagine my surprise and consternation when the twins captured Nemesis and this happened:

"My Husband, My Enemy!" (Told you it was like a Lifetime movie!) And I love Edward's use of the word "snooping." Not exactly bad-ass lingo. Next he'll be bitching about "those meddling kids -- and that dog!"

Nice, clean dreams, dragged through the mud? How very Geoff Johnsian! Except the heroes don't feel personally defiled afterwards. On the last page, Clare tells Ann, "It can be a dirty world out there. I know, I wade through the filth every day. But I've learned one thing -- if you stay strong, you can keep yourself clean." The story ends with an empowering message. 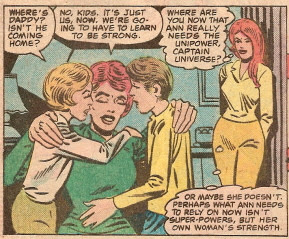 Appropriately, the thought balloon about female strength seems to be emanating from Clare's crotch. It's the original Vagina Monologue! 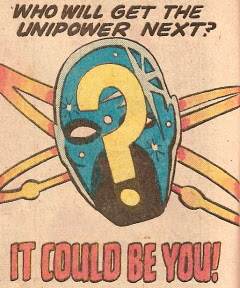 "It could be you!" Yeah, just keep telling yourself that. And keep shouting "Shazam!" whenever you're alone.

In "Marvel Spotlight" #10, "meek housewife" Ann Dodgson Stanford is transformed into the heroic Captain Universe. And she uses her newfound abilities like a bold housewife. 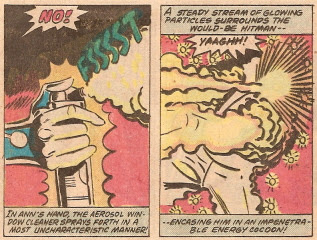 Y'know, Storm Boy also "sprays forth in a most uncharacteristic manner." I've told him he oughta get that shit checked out but he never listens to me.

I wonder how many children read this comic and then turned a fire extinguisher on their little brothers. Don't try this at home, kids! Or if you do, stick with an aerosol-based desert topping. 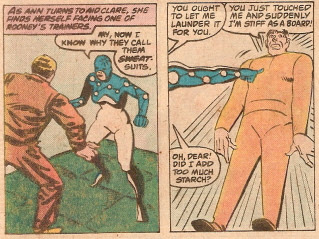 (This scene takes place in a gym, so don't get any dirty ideas about "Rooney's trainers." 'Cause, eww. )

Ann's twin sister Clare knows all about her obsession with cleanliness. Check it out! 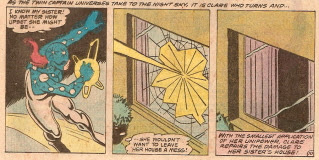 Here, Clare fixes the window she smashed through a couple of minutes before. Not because it's the right thing to do, mind you. It's just that she knows Ann is going to moan and complain about her broken window and all the glass shards in her expensive carpeting and frankly, Clare is in no mood for that shit. Gosh, it's almost like they're married!

Captain Universe: The Hero You Don't Deserve To Be

Wow, is this late! It's all Jeremy's fault. He saw "Dreamgirls" last night and he kept me up 'til 4 AM talking about it. I learned a lot about "Dreamgirls!" Did you know that Dreamgirls will help you to survive? That's what Jeremy says. They'll also, apparently, keep your fantasies alive. I take it they're some sort of elite search-and-rescue team. Also, according to Jeremy, Jennifer Hudson's big show-stopping number "And I Am Telling You" is about fourteen hours long and may have been guest-directed by Peter Jackson. Not everybody in the theater made it to the end of "Dreamgirls." Several of the older patrons collapsed, and had to be treated for exposure and malnutrition. Jeremy recommends that if you want to see "Dreamgirls" that you take along a thermal "space blanket," water purification tablets, high-protein foods like peanut butter and beef jerky, and a change of underwear.

Great planets, where was I? What? "Captain Universe?"

Captain Universe -- "The Hero Who Could Be You" (But Probably Isn't) -- is the casual slacks of superheroes: good-looking, somewhat durable, and suitable for any occasion, but also really, really boring. I know the silhouette is a lot like the Silver Age Atom's costume, which a lot of intelligent, tasteful folks adore, but I personally can't stand it. So sue me. (And yet I like the Ryan Choi Atom costume. Why? Three words: big shiny backpack! Whee!) The Captain Universe costume is actually worse, because there's so much white space, and the molecular connect-the-dots pattern gives me a migraine.

That said, Captain Universe's creator, Bill Mantlo, really brought his "A" game for "Marvel Spotlight" #10. In this issue, the cosmic "Uni-Power" energy bestows the Captain Universe powers upon twin sisters -- one a kick-ass (yet sexy) private eye and the other a "meek housewife." It's the kind of dual role Donna Mills or Stephanie Powers would have played back in the day.

Let me take you through it. Clare Dodgson is the crime-busting detective (prone to dropping handguns out of her sleeves) and Ann Dodgson Stanford is a homemaker with two kids. Ann's husband Edward is a crusading D.A. on the trail of the crime boss known as "Nemesis." After Edward helps convict two of Nemesis' associates, some gangsterish types grab him and hustle him into a car. Clare, meanwhile, heads to Ann's house for dinner but spies a mysterious hand through the window. Just then, Ann sends her twin an extremely vague telepathic warning. So Clare busts through the window and starts shooting the gangsters to death. ("That dame's a crack shot!") So Ann sends the kids to the neighbor's house alone and goes to help her sister. Uh-oh! There's another gangster outside! I hope the kids are okay! Because Ann, a.k.a. their mother, isn't thinking about them at all by this point. Y'see, the gangster on the lawn is pointing his gun at Clare! 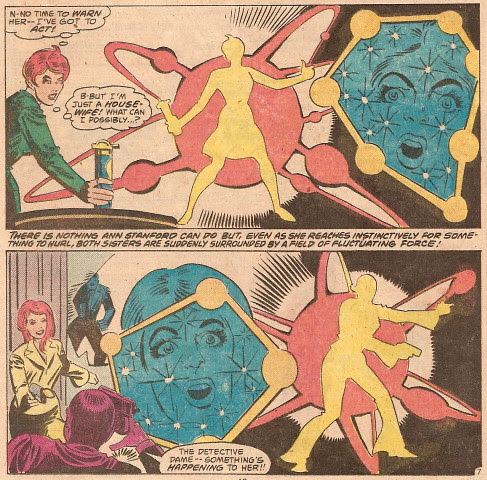 How do you like that "B-but I'm just a housewife!" line? You don't like it? Me neither. But that's too bad, since there's way more where that came from. There's also:

Yikes. On the plus side, the comic ends with Ann realizing she'd depended far too strongly on her husband, and she resolves to be a stronger person. 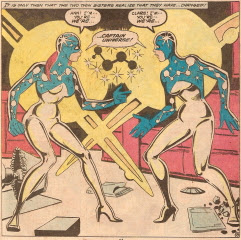 Also, it looks like the Uni-Power is into stiletto heels. Who knew? (And wouldn't it have been kind of awesome if it had put those heels on the Captain Universe costume it gave to its previous beneficiary, teenager Steve Coffin? Finally, he would have had something to discuss with the school counselor!)

I'm super-busy this week. That means my in-depth examination of "Marvel Spotlight" #10 (January 1981) is going to be more stretched-out than the Blob's favorite jammies. This is one of my favorite comics, like, ever, by the way. It's basically Captain Universe as adapted for a Lifetime Original movie ("Love's Deadly Masquerade: the Captain Universe Story.") 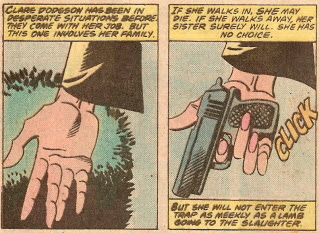 Well, that's a smart idea. In theory. But if Clare sneezes while she's shaking hands with someone, she's looking at an involuntary manslaughter charge.

Maybe Marvel could do a miniseries called "Sleeves" starring Ultimate Universe Clare and Ultimate Universe Mockingbird (so she's still, y'know, alive) and they could battle it out for three issues or so, producing deadlier and deadlier weapons from their voluminous sleeves. On the very last page they each fire an ICBM (er, do you guys still have those?) from their sleeves and obliterate Tulsa. (Why Tulsa? Because I've never much cared for it. It's a personal thing. Don't ask me to go into details. Oh, alright. It's because a clerk there once called me "doughy." Damn Tulsa. Raze the whole city, I say!)
Posted by Jeremy Rizza at 5:51 AM 4 comments:

In "The Fury of Firestorm" #6 (January 1982) an old Flash villain gets his hands around a powerful instrument. 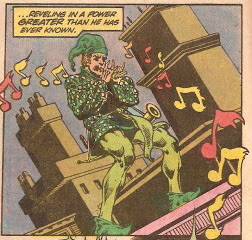 Yes, it's the Pied Piper, Masturbator of the Pan Flute.

Y'know, I don't care if he's a musician; that outfit absolutely kills any sex appeal he might have had. Who'd he swipe the tunic off of? Woozy Winks? Not that he had many choices. I think it's interesting that back in the Olden Days of Comics patterned fabrics were only available in polka dots or in simple, grid-like plaids. No wonder the supporting characters were so square... everything they wore was the graphic equivalent of a cold shower! Only the superfolk knew how to dress for bedroom success: in the most flamboyant manner possible. To put it another way: if you were a guy and you wanted to get laid back then, you had to walk around with a fin on your head (Doctor Light being the obvious exception to that rule).

The Pied Piper was in dire need of a makeover. And he'd get several, eventually Not that I've been terribly fond of any of them. But he also got one in this very issue... kind of! Before I show you the "after," suppose you let me drop the needle on this old Bernard Herrmann record and adjust the neck on that tensor lamp just so. Okay, I'm good. BEHOLD!!! 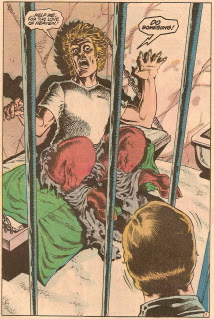 "Do something!" Er... alrighty. Given my knowledge of Greek mythology, I'd probably jostle the deputy there and shout "Somebody get this man a wineskin, a flask of scented oil, and a slim, hairless teenage boy, quickly! Also, somebody send in a donkey covered in flower garlands! (That one's just for me.)"

Yikes, huh? I think I liked him better in the polka-dot clown costume. Poor Piper. He's got the most literal case of satyriasis in medical history. Yet in a cruelly ironic twist, his penis has completely vanished. On the plus side, this bizarre metamorphosis should keep him away from the pixie boots for awhile.

But wait! It gets worse! 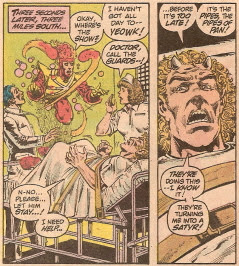 Not only did he get horns and elf ears, but his case has been assigned to a gynecologist! He must have a really crappy HMO.

To be honest, they would have cured him already, but they need the cheese. (No penis! You do the math.)
Posted by Jeremy Rizza at 5:15 AM 4 comments: