Before we get down to business, I'd just like to say how much I appreciate the generous outpouring of support I've received after my last post. The mountains of letters and sympathy cards, the bushel baskets of orchids, the scented soaps in the shapes of prancing unicorns, the steamer trunk filled with Italian shoes, the gift certificate for twenty-five credits off the all-u-can-eat steak and potato bar at Space Sizzler, the kryptonite-encrusted rocket sled, the Shetland pony that's trained as a personal shopper...! Why, you're the best friends a 30th Century other-dimensional fashion designer who can turn into a moderately-sized steel wall and who is cursed with an ungainly yet strangely handsome mechanical dingus could ever have. *weeps openly*

She's Vietnamese, kind of, only her dad is some guy with a German name who was the original Libra in the supervillain group, the Zodiac. And she married an alien tree, basically, only it was in the body of her ex-boyfriend, and they had a son named "Sequoia" (I shit you not) and she managed to travel to other universes under various aliases like "Willow" and "Lorelei" where she'd mainly just say enigmatic crap, and she hooked up with Kang, only not really, as in that Mantis was a hyp-mo-tized Space Phantom which you have to admit is pretty funny. Also, she has the power of "total body control", like one of those conditioners you can only buy at a salon. Not to mention, she has some kind of super-empathy and she can astrally project herself across the whole freaking universe and build a host body out of vegetation. So she's kind of like the Swamp Thing, only sluttier. She loves to refer to herself as "this one", which is the spoken version of never capitalizing the word "I". Oh, and somehow the Kree are involved. Of course. Also? Ugh. Suffice it to say, I'm not a fan. But if you like her, hooray for you! No, for reals! Go get 'em, tiger! *gives thumbs-up sign* 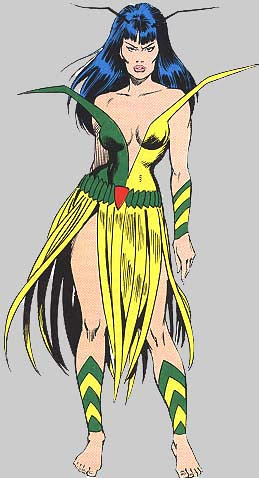 Girly clothes? She's bustin' out of 'em! For starters, there's the aerodynamic and way off-the-shoulder bustier, the Bettie Page bangs, and the cutesie-poo antennae made of God-knows-what but is probably just hair. And she's wearing a hula skirt!

So how do I butch that up? 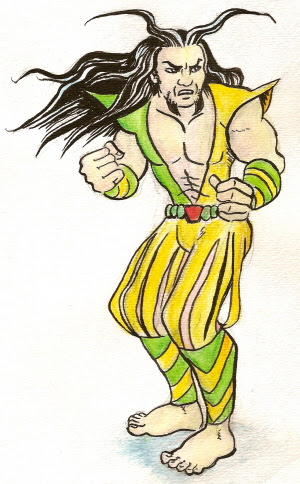 Starting from the top down, I had a heck of a time figuring out what to do with Man-Mantis' hair. I figured the hair-antennae would look manlier if they were more substantial. So I altered them into Quicksilver-style forelocks -- only longer, natch. I also gave him Ra's al Ghul's facial hair, to symbolize mandibles. I toned down the shoulders on the goofy fly-away bustier and made it into a vest. The belt and the wrist-bands were neutral enough, so I could leave those alone. The skirt is now ventilated, extremely breathable genie pants -- and not pantaloons, wiseapples! Unlike those ballooning antiquities, my Man-Mantis man-pants are tailored to gently hug the crotch and buttocks areas. It's only below those parts that they flair out, open up, and do their funky thing. Due to the shape of the pants, I had to change the ankle bands a little. So I inverted them. That's all. Simple, see?

I think it works okay. I'd never give one of my paying clients "hair antennae" or a vertically bisected yellow-and-green vest. Or that belt! But they were key elements of the original design and I felt I had to honor that. Man-Mantis would fit right in with 1970's sock-choppy heroes like Shang-Chi and Iron Fist. Right away I can envision a book-length novel where the three of them team up and go to town on a bunch of bad guys, and that part would be over with in about three pages, and the rest of it would just be them relaxing in one of those Japanese communal baths, talking about foot lotions.

Previous Gender Reassignment Challenges:
Next week: Rescue Me: Titania! But before that is April Fool's Day. I certainly hope nothing untoward happens to my blog.
Posted by Jeremy Rizza at 11:07 PM 4 comments: