Rescue Me: The Fly

Or "The Human Fly" as he was sometimes called. Which must have been confusing for that 70's stuntman guy with the same name and his own Marvel comic. His costume was kind of boring, that's for damn sure. But I don't agree with Marvel's decision to mutate him and make him even more insect-like, and give him a preference for eating garbage. (Like Tostitos and Ding Dongs.) I guess Marvel finally realized he was more disgusting and pathetic than menacing. And so down came the swatter.

Well, I call shenanigans. He was a powerful guy in his prime, with some pretty cool powers, like the ability to generate explosive force by "buzzing" his wings at a certain frequency. And he was strong, fast, and could stick to walls. I think he would have made a great enforcer-type character -- y'know, badass muscle hired by crime bosses to rub out their enemies. And I would have dressed him like so: 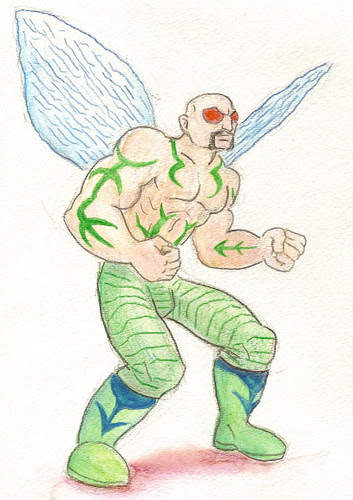 Forget the traditional costume -- with those big bug eyes and wings, he doesn't need anything else that could make him look campy. So we have green leather pants and boots and some tattoos that are based on the shape of flies' legs. I shaved his head and gave him a fu-manchu. Which is dyed black, since his natural haircolor is a strawberry blonde. It's more of a down-to-earth, rough-and-tumble look for the guy. He fought Moon Knight at one point; I think he would have been a good villain for other street-level heroes, like Daredevil or Power Man.

What do you guys think?
Posted by Jeremy Rizza at 6:17 AM 5 comments:

Rescue Me: The Hijacker

The first time I saw the Hijacker in a comic, it was in that supervillain clusterfuck from "Marvel Two-In-One" #96. I had no idea who he was. Apparently I wasn't alone, since Marvel's editors had no problem with offing his padded, gas-spewing ass. In a crowd scene, yet. At least the Bug-Eyed Bandit only had to share his last panel with Clayface II.

So what, precisely, is wrong with the Hijacker's outfit? Easy. It's boring. It's gray and boring with a stupid gasmask that makes him look like the lovechild of Roy Orbison and a baleen whale. Let's pep that shit up! At least he'll have something nice for his funeral. Assuming it's open-casket. 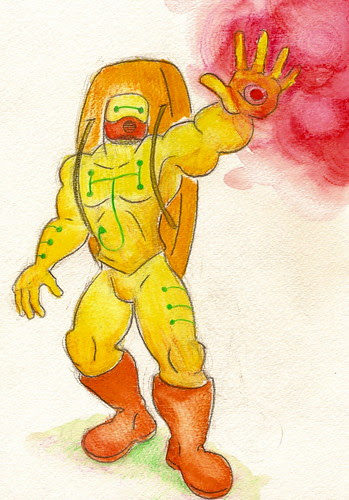 I knew I didn't want to keep his costume gray, but I puzzled over what color to make it. I wanted something kind of industrial or toxic, so I settled on an acid yellow. The lines and dots are circuitry built into the suit that allows him to hack into computer systems. And he has a nice big backpack - lightweight, natch - to hold his knockout gas. The logo on his chest is supposed to be a combination of an "H" and a "J" with the "J" resembling a fishhook. Although I have a feeling I didn't draw the barb on the correct side. Oh well.

Tomorrow: Rescue Me: The Human Fly!
Posted by Jeremy Rizza at 5:39 AM 4 comments:

Booyah! Another post this morning! I now consider myself officially caught up. And if you disagree you can suck it. Oh, I'm being hostile for no good reason again. I apologize. Anyway, I've got my Hijacker design all figured out so it'll be a snap to finish it up in time for tomorrow morning. Whee!

Here's the original Cyclone costume. Try tearing your eyes away from that gigantoid symbol on his back. You are getting very sleepy... because the look is quite boring! Let's give this poor dead dope a makeover, shall we? 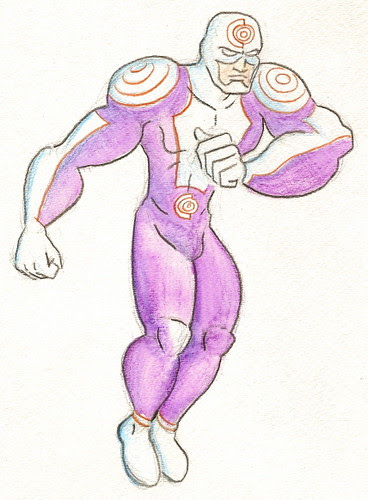 I like the concentric rings but not when they make a huge target shape on the back of the costume. (Honestly, he was kind of asking for it, wasn't he? What, a "Kick me" sign was too literal?) So I relocated them to the shoulders and I designed a logo with the rings nestled within a "C." And I changed the color scheme to something more interesting. Fun fact: I was sorely tempted to make the white shape on the chest and neck a skin-revealing cut-out instead but I realized I shouldn't draw every guy with a bare chest, no matter how much I want to. I have to change it up now and again. So what do y'all think?
Posted by Jeremy Rizza at 9:32 AM 6 comments:

Rescue Me: The Melter

Sorry... no "Snowbeast" post today. Or ever, probably. I realized it was too easy. So instead we have the Melter! I can't seem to find a decent image of the Melter on the web right now, so I guess we'll have to settle with me linking myself. Look in the second panel. He's the majorette of the loser parade! 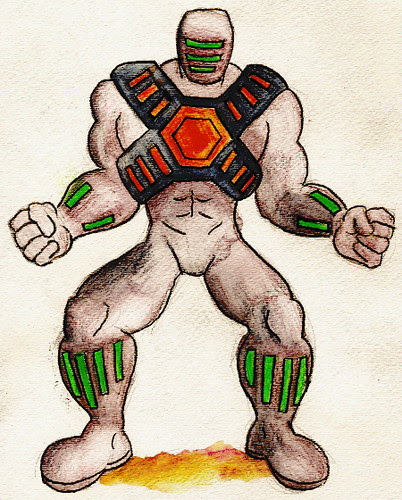 I reduced the green and orange to spot colors and gave him a mask that covers his whole face. I figure the orange lights on the harness around the melting weapon would light up in succession from the outside in, as it powers up. As for the green lights on the arms and legs... well, I just put those in there because I thought they'd look cool and they'd be a call-back to his green pinstripe trousers. If you want a practical reason? They contain coolant. Yeah, that's the ticket.

I swear to God I'm going to get caught up on this thing.
Posted by Jeremy Rizza at 6:54 AM 4 comments:

Welcome to another installment of the Gender Reassignment Challenge, where I take the creme de la girliest of superheroine costumes and redesign them for a male hero.

Before Teen Whore Supergirl, before Witchblade, before Power Girl's cleavage porthole, long before any of these desperate, sweaty attempts to attract male readers, there was the Phantom Lady. Her costume was flimsy enough to land her in "Seduction of the Innocent" and to be brutally honest, it made her look as though she'd been forcibly giftwrapped. So how could I interpret this ensemble for a guy? Well, here goes! 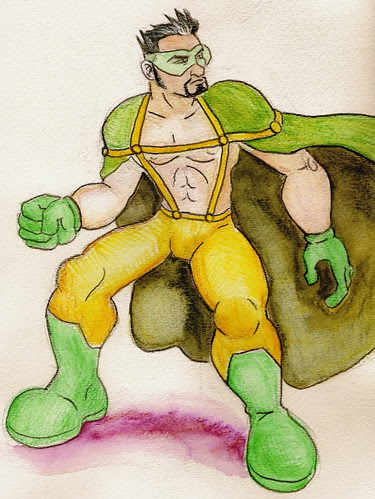 I replaced the silky "nipple tarps" (foreplay called on account of rain!) with complicated suspenders. I tried to keep the diamond shaped negative space from the old top but I added a cross-piece and brought it across the tops of his arms to emphasize his shoulders. And I gave him pants. Because he has "Lord" in his name and I can't see somebody like that gadding about in their underpants. It's the same reason I gave him the sweet-ass VanDyke. It conveys authority. And yet the spiky hair says "I'm youthful and I'm ready for adventure!" I think he has a nice Mediterranean flavor. Very Antonio Banderas.

Next: another Gender Reassignment challenge: Snowbird to Snowbeast!
Posted by Jeremy Rizza at 5:42 PM 7 comments: