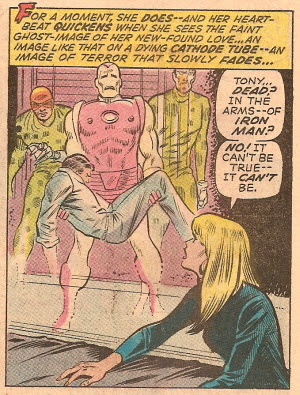 Now I lay me down to worry
My mind's as mixed-up as a slurry
If my brain should plumb explode
Don't reincarnate me as a toad
Amen. 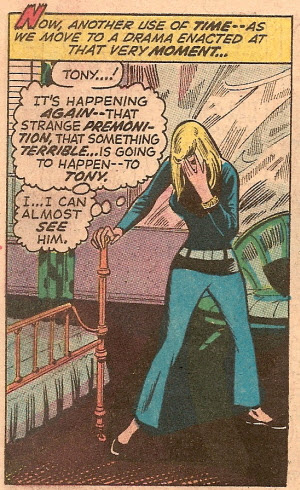 Well, that doesn't look like a comfortable pose. Was she in the middle of doing jumping jacks when that migraine hit? Or was she about to throw a low inside changeup? Whatever it was, she's been standing in that position for so long, some industrious spider has used her back as the support for a web of Brobdingnagian proportions!

But never mind that now. Just where th' heck is Marianne, anyway? She flew with Tony to Washington because he had been subpoenaed or somethin', so I presume she's staying at a hotel. Of course, the manic manner in which she bolted off that runway suggests she could be anywhere by now. Maybe she even wandered into some stranger's house, Robert Downey Jr.-style! That sounds more likely to me than a hotel. Because if it's a hotel... hoo-boy! A spindly, skeletal brass footboard, the thinnest mattresses available, and dust ruffles that haven't been cleaned since the Garfield Administration--! Is this the Lizzie Borden room at FantaSuites? Jeebus. She'd be safer sleeping on that sprawling, Ditko-esque chair in the back... providing the alarmingly-angled legs don't break off in the middle of the night.

And then there's the fabric they used for the drapes. Look familiar? Run, Marianne! The jumpsuited terrorists are coming from inside the house!
Posted by Jeremy Rizza at 5:19 AM 5 comments: 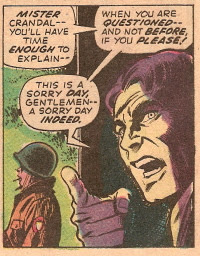 Hey! Watch where you're pointing that fat finger, Senator Snippy Schoolmarm! (If you please.) Although to be fair, you're probably just pissed because the Speaker of the House poured grape soda all over you and you haven't had time to wash it off. ...Naw, that still doesn't explain your weird matronly ranting or your smooth, fat face. Okay, just keep that finger steady while I hold this panel up to my Comic Book Character Fingerprint Recognition Scanner (another fine Storm Boy product)... *PING!*

Aha! So you're actually Granny Goodness! That explains everything.
Posted by Jeremy Rizza at 6:47 AM 4 comments:

As you may have heard, I'm having some difficulties right now. Don't you worry your sweet little noggins about it, though. *reaches through computer screen and tousles your hair, or pats the bald spot where your hair used to be.* It won't keep me from blogging about "Iron Man" #41! 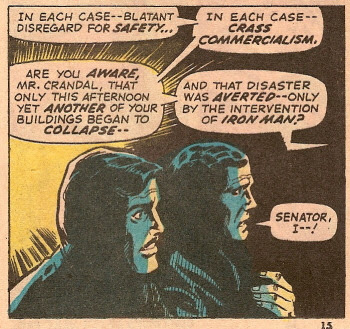 Uh-oh! The Senator ran out of collapsed building photos and has now moved on to his vacation slides! It's the Senator in bikini briefs -- albeit on the motorized stalagmite tour at Mammoth Cave for some reason -- and the imagery is so shocking it's burst right through Tony's retina and has exploded out the back of his skull! And he thought he was a playa! About the disembodied hand in the lower right corner... imagine it's Crandal's and it merely makes him look shocked. But imagine it's Tony's, and it makes him look Italian. ("Madon'! Never have I seen such a pazzesco slide!")
Posted by Jeremy Rizza at 6:44 AM 3 comments:

Becalmed Before the Storm

The big news? We're adrift. Despite constant instructions to the contrary, Tusker found his way into the engine room. Once there, he managed to spill an entire gallon of Bismoll MacMattercuddy's Famous Double-Plutonium Espresso into the reactor chamber, causing a chain reaction that melted the core and destroyed the main engine. We're running on backup power right now, so all the lighting is dim and also RED for no good reason except Blockade Boy must think it looks 'cool' or something. The backup engine is powered by a little hand crank that must be turned every hour. Kind of a pain. I'd make Tusker do it but I'm afraid he'd SNAP IT OFF. Oh, and have I mentioned we're "laying low" in the Gorilla Nebula, far away from inhabited planets and trade routes? Oh, yes, we're quite possibly screwed.

I snagged Storm Boy to help me figure out some way to work around the destroyed engine. But now that he's on the wagon he's really kind of manic and useless, and he can't concentrate for beans. Every piece of machinery he laid his eyes on suggested some outlandish and impractical new invention to him. I just wanted the ship to have a working engine and he kept pestering me with rhapsodies about banana clips that electronically hypnotized head lice into working as a profitable miniature circus, or a combination vacuum-bagpipe that plays music while you clean. And in the middle of all THAT, Weight Wizard showed up in a nude panic demanding to know where we kept the crowbar. And when we asked him why, he just looked down at his feet and said, 'No reason.'

A few hours later and with very little accomplished Storm Boy and I swung by the galley for some breakfast. And there was Weight Wizard. I could tell right away something was amiss, because he was wearing clothes. And he was much friendlier than usual. Normally I can't get two words out of him. (He's one of those smug-yet-frosty types... he's always hanging onto Storm Boy, and usually when I try talking to him he'll either say nothing at all or he'll smirk and whisper something to Blockade Boy. It's irritating.) Oh, and even more suspiciously, he tried to make small-talk. Like we were old friends. But there was something about his eyes that seemed OFF. He looked shell-shocked. So I just asked him point-blank, 'Where's Blockade Boy?'

He shrugged. 'I'm sure he's around here somewhere.' I asked him if Blockade Boy was still upset about getting voted off Next Top Hero. He guffawed, ruefully. Then he mumbled something about Blockade Boy having 'bigger stuff to worry about.'

Just then, Blockade Boy slammed through the swinging doors. He was dragging himself forward on two of his best, most pretentious canes. And the techno-organic bug that had infected his legs and dingus had taken over his arms, shoulders, and a good deal of his torso! 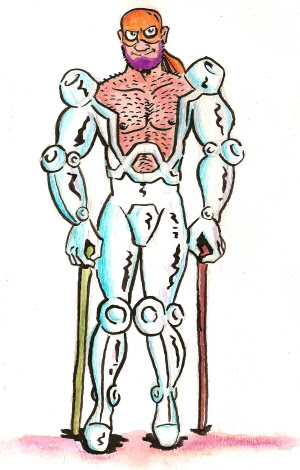 He hobbled over to Weight Wizard and they argued in hushed tones about something or other. I'm pretty sure the word 'dingus' was bandied about. I interrupted them to insist Blockade Boy go to sickbay for a thorough examination. Then Storm Boy interrupted ME by blurting out 'You look HELLA COOL!' He had a peculiar expression. Kind of a surprised smile, like a kid on the first day of Klordney Week.

Scans showed that all the organic and mechanical matter that used to be irretrievably intermingled in Blockade Boy's lower half had VANISHED, leaving everything below his waist a hollow, jointed shell. Like a ventriloquist's puppet! Furthermore, his magnetic codpiece has fused to his crotch, where his robotic dingus USED to be. And the rest of him -- bones, nerve endings, gears and fan belts -- is just DANGLING there inside his chest! To be honest, there is no scientific explanation for why Blockade Boy is even STILL ALIVE. It's weird. And Weight Wizard was not taking it well. AT ALL. Blockade Boy will try to put his arm around him, for support, and Weight Wizard will try to shrug him off, so Blockade Boy will then put his OTHER arm around him and hold Weight Wizard's arm there so he can't let go, and then the two of them will basically WALTZ wherever Blockade Boy wants to go. It's awkward.

I don't know what's going on.

But whatever it is, it can't possibly end well."
Posted by Jeremy Rizza at 6:38 AM 6 comments: 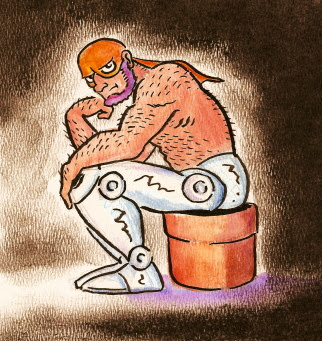 Rainbow Girl: We've had some terrible news. Brigadier Blockade is in seclusion in the port side of the ship.

She presses a button, and two heavy wooden doors slide open to reveal Blockade Boy's latest cabin, formerly the crew's lounge. In a corner, Weight Wizard dozes nudely on a liobear-skin rug. Nearby, Cootie the cat contentedly grooms herself. And Blockade Boy himself sits dejectedly on an ottoman, facing a crackling atomic fire which emits little black Kirby-esque bubbles in lieu of smoke. A somber, dirge-like rendition of "Hair of the Dog" reverberates through the room.

Blockade Boy waves Storm Boy inside without looking at him.

Blockade Boy: It's funny. I can look back on a life of blogging, costumes bettered, deadlines overcome. I've accomplished more than most pirates-slash-fashion designers, and without the use of organic legs. What... what makes a hero, Storm Boy?

Blockade Boy: Yeah, I'm not calling you that. But the "hero" stuff. Is it... is it being prepared to do the right thing? No matter the price? Isn't that what makes a hero?

Storm Boy: That and some kick-ass spiky shoulder pads.

Storm Boy (laughs nervously): Uh-huh. You have a purple beard and metal legs, which practically makes you an official X-Men character, so I really don't think that's your problem.

He thumps on his uniform pocket.

Storm Boy: Mind if I eat a protein bar?

Blockade Boy turns to face Storm Boy. In the flickering light of the atomic fire, glistening tears roll down his cheeks and disappear forever within his thick Donegal beard.

Blockade Boy: Next Top Hero. The internet "reality show" for super-heroes. I got voted off. In a freakin' landslide. What am I, Hate Face?! GODDAMN! ...Are you surprised at my tears, Storm Boy?

Storm Boy: More like alarmed and a little squicked-out, but okay...

He clears his throat, which sounds like a waterlogged outboard motor.

Blockade Boy: I received the news just a little while ago.

He hands Storm Boy a print-out of an image from an ancient Earth computer screen.

Blockade Boy: Rainbow Girl will fill you in on the details.

He turns away and stares into the atomic fire once more. Rainbow Girl taps Storm Boy on the shoulder and leads him out of the room. Storm Boy speaks over his shoulder to Blockade Boy as he exits.

Out of Blockade Boy's cabin, Storm Boy tears the wrapper off a protein bar and devours it.

Storm Boy (crumbs spilling from his mouth): What in space was that all about?

Rainbow Girl: Oh, he's had me drag everybody in there. First Tusker, and then I had to cart Plant Lad's zombie carcass in to see him, and now you. It all goes in order of rank.

Storm Boy: I'm outranked by Plant Lad?! He's the ship's figurehead! He does absolutely nothing at all...

Rainbow Girl: Thanks for not making me say it myself. But here's the main thing you need to know: the Brigadier will be holed up in there feeling sorry for himself for quite some time. I can't see him snapping out of it until Thursday at the earliest. That means no marching--

Rainbow Girl --and no piracy and certainly no blogging.

Storm Boy: No blogging? Say, in the meantime, could I maybe post some of my poems?

Rainbow Girl: Does it really matter? And think hard before you answer me.

Rainbow Girl: Good kid. Now get out of here.

Blockade Boy: Rainbow girl? ...RAINBOW GIRL?! Can you make me another Orando Sling? Weight Wizard doesn't know how to do it right...

Rainbow Girl (mutters): I swear to God, if he doesn't stop this shit by Thursday I'm going to stop it for him...