In the Moral Realignment Challenge, I imagine how a bad guy would look as a good guy, and vice-versa. Currently I'm working my way through the Fearsome Five and the Teen Titans! Hey, Starfire and Psimon! You're up to bat! 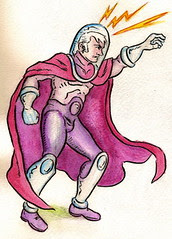 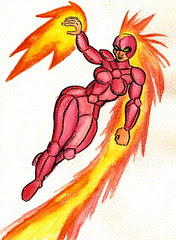 From "Quiz the Question Guy (All-Psimon Edition)" in "Direct Currents" on the back pages of "Brainiac Bunch" #218 (February 1982) on Earth-AAA:

Q: Where did Psimon get his powers? A: Orphan Simon Jones was granted his magic mental abilities by the old wizard Trigon the Terrific!

Q: Why does Psimon wear that dome on his head and what is it made of (the dome, not his head)? A: Now that he's a grown man, only Psimon's special diamond quartz helmet can keep his awesome powers in check when he's outside of his containment capsule.

Q: What happened to the Psimon back-up in CLAIRVOYANT COMICS? A: Psimon is busy adventuring with his pals in THE NEW FEARLESS FIVE. But don't be surprised if he guest-stars later this year in CLAIRVOYANT fighting alongside his former mentor, Doctor Psychic!

Q: Why does Starfire have it in for Psimon? A: In DC SUPERSTARS IN SPACE #6 he prevented her from destroying her home planet of Tamaran.

Q: Is Psimon related to Validus from the LEGION OF THE SUPER-VALIANT comic? They both have mental powers, Psimon wears purple and has a see-through helmet and Validus is purple-skinned and has a see-through head! A: Wow! Interesting theory, but nope! Validus is not Psimon's descendant. Besides, can you imagine your child coming out looking like your favorite outfit? That would just be silly! 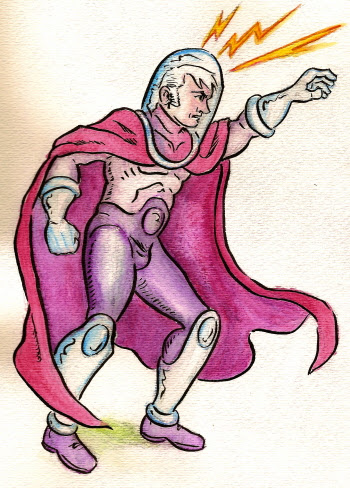 Evil Psimon is a creepy monster so I made Good Psimon a handsome hunk. He has that Mister Freeze thing goin' on with the helmet so the fact he's a dreamboat just makes it all the more tragic he can't kiss anybody. (And conceptually, Good Psimon owes a lot to Cyclops, Rogue, Jack of Hearts, and just for the heck of it, Captain Marvel... er, the Fawcett/DC one.) I based Good Psimon's costume on the Evil Psimon's original duds... y'know, the hot pink choir robe with the lace collar? That's where the cape came from. So the terrarium helmet wouldn't get lonesome, I added see-through-plastic-over-white gloves and kneepads. The rest of the costume is done up in shades of purple to coordinate with the cape. Finally, his hair is white, because it goes with the whole colorless/see-through head theme. Besides, I just can't resist a good-lookin' guy with prematurely white hair! 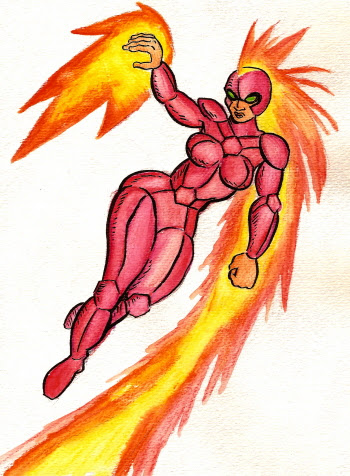 Good Starfire's costume is a flimsy purple number with freakin' daisies or some shit on it, so I made Evil Starfire's costume the opposite of that in several ways:
Also, her positively gargantuan Tamarafro of sproingy, curly hair -- or rather, the energy that surrounds it and creates the illusion of a trail as she passes by, is confined to a crest of flames atop the helmet. Voila! Curvy cosmic badass!

Next week: I'm not done with Starfire yet! It's Gender Reassignment Challenge time!