The Curious Case Of The Crunch-Coated Cop

I think DC missed an amazing opportunity for a spin-off from this Firestorm back-up story in "Flash" #304 (December, 1981). 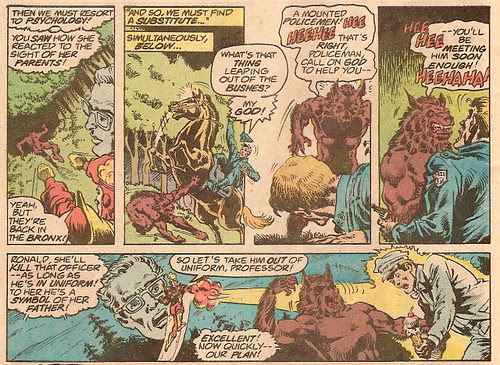 I bet being involuntarily costumed as an ice cream vendor was a profoundly life-changing experience for that policeman. At the least, it would have driven him stark-raving bonkers. I can just picture him quitting the force to wrestle with his conflicting need to dispense both justice and fudgesicles. He'd be DC's very own peanut buster parfait Punisher! Grimly, he'd patrol the streets of, er, wherever the hell Firestorm was living at the time, in a gloss-black ice cream truck (with all the windows tinted, but of course), death metal music blaring in a garbled, stuttering fashion from the damaged speakers. Besides the usual arsenal of high-tech weaponry, he'd lob scoops of mace-chocolate-chip at his enemies and use jagged waffle cones like ninja throwing stars. He'd burst into a crack den and machine-gun the place, giggling "How 'bout some sprinkles, bitches?!!" Maybe he'd enjoy occasional team-ups with a smaller, more refined vigilante by the name of Haagen-Dasz (a Danish* spy, perhaps?) or a pair of drug-addled underground radicals called Ben and Jerry, or maybe even a sultry, fishnet-hosed karate-chopper codenamed the Blue Bunny. Of course, he'd still wear the ice cream man uniform, only without the jacket and with the sleeves of the shirt ripped off to expose his massive, oiled/grimy biceps. And naturally he'd have a couple of bandoleros draped over his shoulders, and two ice-cream scoopers in leather holsters, like guns. Yeah... that would've been pretty sweet. *sighs wistfully*

*Although Haagen-Dasz is actually an American brand. (I hope I didn't blow your mind.)
Posted by Jeremy Rizza at 5:38 AM 6 comments:

Y'know the best thing about my new gig with Blockade Boy? Besides the fact that we can wear each other's clothes, I mean! Which reminds me! BB, or "bro" as I like to call him, has the grooviest leather pants -- in crimson, yet! They hug his buns perfectly and since we have similar body shapes I know that I'd look good in them too. Haven't had a chance to wear them yet, but for now it's just cool watching him walk around in them. ...Huh. I feel all funny inside now. Um. Anyway! The other best thing is getting to observe the love techniques of other dimensions! Here's a real pro I've discovered from the DC Universe. His name is "Mento" and I think all you turkeys can learn a lot from him. 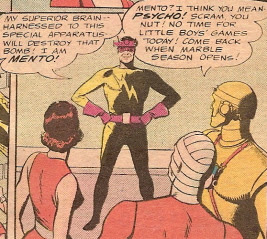 Okay, so you see a fox you want to do the diagonal polka with, but she's already talking to two other guys! Don't be spooked! Walk right up there and announce yourself as loud as you can without actually yelling. And don't slouch, damn it! Observe Mento here. He's in a pose I like to call "the rooster." Hands on hips, neck straight... in my version I actually flap my elbows like they're wings and do kind of a forward-head-bob thing, but Mento's style isn't bad either. 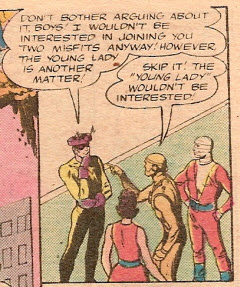 The other guys may try to distract you by inviting you to a pickup basketball game. Don't be deterred! Brush those losers off! They're just turkeys in wolves' clothing! 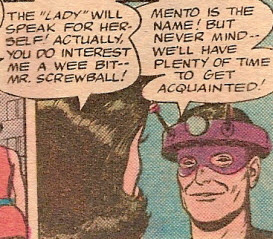 Okay, so you announced yourself already. Too bad, because you may have to do it again. Several times, in fact. You may have to remind your target of shlongmantic conquest of your name, over and over and over. So say it whenever possible! Talk about yourself in the third person! Like I do! ...I mean, "Like Lancelot Steele does!" Try wearing one of those old-timey mayor sashes with your name emblazoned on it! In gold! Buy a parakeet and teach it to say your name, and then give the bird to her as a gift! Spray-paint your name all over her house, and then blame the deed on an admirer! Got it? You want to burn your name in her brain. Not literally, of course. Because then you'll wind up in prison, and you'll find yourself pinned beneath some huge brawny psychopath, his long wiry beard scratching against your cheek as he whispers obscenities in your ear, his fingers probing ever deeper inside your... well, the point is that you don't want that sort of thing to happen, now do you? I know I don't. It's one of my biggest worries! I think about it all the time. 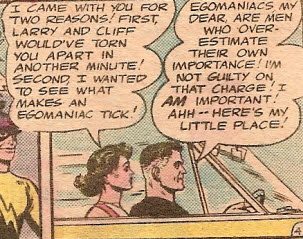 See what he just did there? He took an insult and turned it into a compliment! Like this one time at the talent agency, when I casually mentioned to Dazzler that I wasn't wearing underpants and she said, "Really? Then how come it looks like you have no penis at all? Do you keep it tucked between your legs like one of those she-males, or what?" And I said, "So you want me to wear tighter pants! No prob, babe! Say, maybe you can help me change into 'em!" And then she slapped me and walked away and sure, I had to hide in the copy room with the door locked so nobody could see me crying and Cassandra kept pounding on the door and yelling about how she needed to use the machine and how it was the third time that day I'd holed up in there and how she was going to get Harry to fire me but it was totally worth it 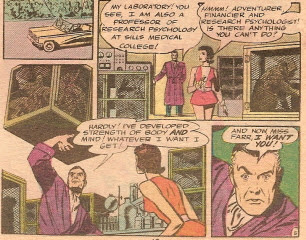 Yeah, man! Flirtation, Steele-style! Mento's got the right idea. Always be lifting something. In his case, a cage full of wild animals. I might have to borrow that idea. And he gets right to the point, doesn't he? That's key. Just tell the girl who you are and what you want to do to her. Focus. Even if, as in Mento's case, you really need to pee just then. 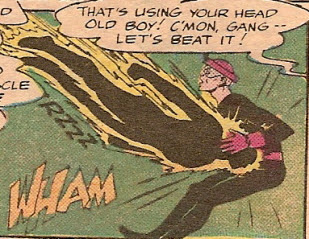 Sometimes the turkeys you shooed away from your love-target will come back, angrier and drunker, and they'll start a fight with you. They'll probably try to punch you in the babymaker -- a beautifully Darwinian move, and one I've used many times myself. The moral here? Maybe you should wear a cup. But don't worry, because your confidence will get you the girl, every time! 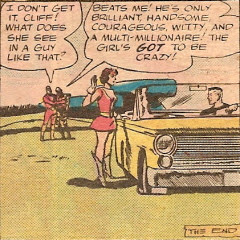 Oh, and it helps if you're a multi-millionaire.
Posted by Jeremy Rizza at 5:58 AM 3 comments:

Monday night's game had a strong match-up between the New York Giants and the Dallas Cowboys, and entirely too much Hank Williams, Jr. and his "Just For Men" dye job. (Fifty-seven years old and nary a gray hair? I don't think so.) The differently-hideous Tony Kornheiser, meanwhile, either forgot to have the spray-on tan applied to his pasty pink scalp (plainly visible beneath the few wispy strands of hair in his combover) or else he's inordinately fond of wearing sunhats. I didn't have a favorite team in this game, so I decided to root for the Giants on the sole basis that I find the Cowboys to be aesthetically displeasing. Especially the cheerleader uniforms. All that fringe! Tacky! And now for my extremely spotty and easily-distracted play-by-play:

Batroc The Leaper Only WISHES He Was This Gay

Sometimes it takes a queen to catch a queen. 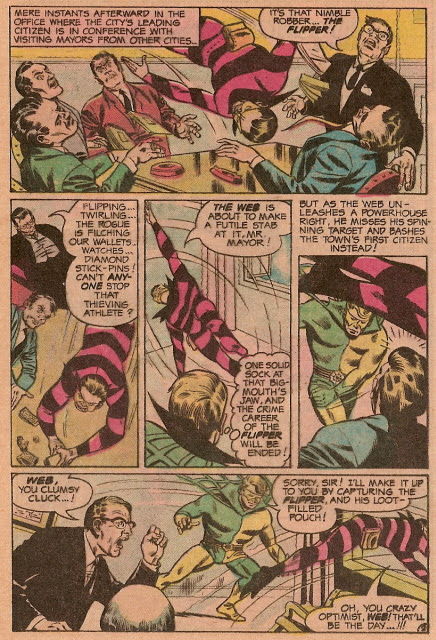 Yes, the Web is simply drooling over the chance to get his hands on the Flipper's "loot-filled pouch." It's a veritable treasure-trove! Why, the jewels alone...! Er, *ahem.* The above nonsense is presented courtesy of "Archie's Super Hero Special" #1 ("1978 Edition" according to the indicia) and it reprints a story from Archie Comics' frankly desperate attempt to replicate the bombastic writing style of Stan Lee. Sad, really. I mean, it's not as though Stan ever ripped off the Archie Comics style. Oh, wait, he totally did.

Y'know, as much as I enjoy costumes with wide black horizontal stripes, the Flippers' duds just aren't doin' it for me. For one thing, he's a thief, and he's disguised himself with a mask, and yet he's not wearing gloves. That kind of thing only works if you've used battery acid to burn your fingerprints off, and it's really not worth it. Trust me. Then there's the upturned collar. Hell, he might as well sew a little embroidered alligator to the front of his costume, put on some penny loafers, wrap a sweater around his neck, vote Republican, and be done with it. (Say, maybe "the Flipper" is his nickname from private school! Y'know, for his uncanny ability to take a straight classmate under the bleachers for about five minutes and convince them to "change teams" as it were.) My solution for the Flipper's costume? In all seriousness, I'd give him some gloves, get that stupid collar off it it, and exchange the mask for a balaclava. It's far more mysterious that way! Also, maybe he shouldn't, y'know, talk.

The Web, on the other hand, might be beyond even my help. (Kidding! I'm a genius! Wile E. Blockade Boy, that's me!)

Dig that goofy cape! I bet if he walks through a playground he emerges with a bunch of eight-year-olds clinging to it. And then he's like "What the hell?" and he has to shake them off like they're ladybugs. Something similar happens if he strolls though a Marine boot camp. Only then he doesn't shake them off. Then there's the bat-winged Vampira collar and the sad little belt buckle. Ugh. Webs are a tricky motif for super-costumes, because they can look way too busy when used in excess -- although I believe I've come up with a great look for Spider Girl, which I hope to show you later this week. My solution for the Web? Ditch the cape and the collar, incoporate the web pattern on the top part of the costume, like, drape it over the shoulders and the torso, and change the color scheme from yellow and green to black and silver, or maybe black and electric blue. Voila. Oh, and he oughta dye his hair black. No, wait! He oughta bleach it out 'til it's completely white! Yeah, that'd rawk. Oh, and I just thought of this! Maybe he could use the cape as his signature weapon, y'know, like how the gladiators in Ancient Roman Tymes used nets (and tridents) in their matches! Suh-WEET! YEAH!!! *pounds chest, gorilla-style* Man, I'm really pumped about this now! I might have to actually draw it!

That's all for now. Get back to work, you goldbricks!

Holy cats! Now, that was a football game! I'm referring (of course) to the Chiefs/Chargers game yesterday -- tied up 27-27 with 5:10 to go in the fourth, and that deadlock only broken by Lawrence Tynes' career-long fifty-three yard field goal with 0:06 left on the clock. So KC won, barely, 30-27.

Posted by Jeremy Rizza at 7:29 PM No comments: