More art! As most of you know, with the moral realignment challenge, I try to figure out how a superhero and a supervillain might appear in the comics with their morality reversed. An anonymous commenter once suggested "Iron Man & M.O.D.O.K. -- and if you can do that one, you're a genius." In a stroke of great fortune for us all, it just so happens I am a genius! (And a modest one at that!) Behold! 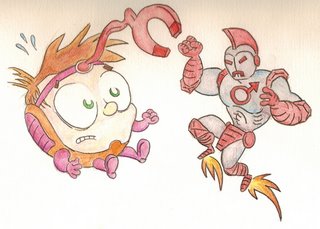 BIG-HEAD BOY #14 -- The Big-Head Boy, M.O.D.O.K. (Mentally Overdeveloped Designer Organic Kid) is back in his own dimension after his titanic team-up with Harry Osbird, The Green Gobbler. Then why can't anyone at Advanced Idea Middle School remember who he is? There's a new hero in town -- and it's none other than Earth's vilest villain, the insidious Iron Man! The cad has swiped Victor Von Dream's Time Tumbler, and he's using it to superimpose himself into all of Big-Head Boy's past triumphs! Can Big-Head Boy uncover the shocking secret behind Iron Man's demented plan? And can he fix the timestream before he disappears altogether? "Adventures: Disassembled" is written by Stan Kaye, penciled by Howie Post, and inked by Jon D'Agostino. A Star comic. $0.65.

...My first thought was, how could M.O.D.O.K. be appealing enough to headline his own comic? And my second thought was, "If he was adorable." To me, that meant de-aging him and putting him in a comic specifically targeted to children. It followed, then, that the evil version of Iron Man would look like someone out of a Jonny Quest episode. So I made his armor look more old-timey, with a Romanesque fin on the head and a segmented iron loincloth. The joints at the elbows and shoulders are meant to resemble hexagonal nuts. The mouth slit turns down so it's a permanent frown, and of course both the mouth and the eyes glow. The design on his chest is one of the alchemical symbols for iron, and naturally it's also the symbol of the male gender, which was serendipitous. And I made the color scheme red-and-gray, like magnets and old robot toys.

^^^ Me too. And I get a kick out of the probability that M.O.D.O.K. bobs along in the most precious way, like a jaunty helium balloon.

Drobviousso and everybody else, too: Thanks!

Steven: I'll work on Flash and Murmur this weekend.

Damn! I wouldn't have commented on something so old, but I just noticed that it was posted on my birthday, hooray!