A funny thing happened to me on the way to ValXan's worldship. No... make that two funny things. The first thing is, the time bubble's robot navigation system suddenly piped up and droned, "HOMING FUNCTION IS ONCE AGAIN AVAILABLE." Which is great, but see, here's why it's funny: the first time I ever tried out the time bubble, the computer informed me I couldn't take it home (i.e. to my own timeline) because that specific era had been destroyed and replaced. And then that replacement timeline got destroyed and replaced, and so on, and so on. It was a real mess. So when I heard that message, my immediate thought was "Great, now the damn time bubble's going on the fritz."

The other funny thing is, while I was moving forward in time, I nearly got sideswiped by another time bubble moving backwards in time. They were going so fast I couldn't tell who was driving, except there were two of them and one had green hair. And I'm wondering who the hell in the Legion of Super-Heroes has green hair. That'd be nobody, right? Unless Princess Projectra's latest dye job went south on her. ...What, you thought that white-blonde stuff was her natural color? Bitch, puh-lease. The other possibility: Storm Boy has gone punk! (God save the queen!)

The whole ValXan deal was a bust, by the way. By the time I got there, he'd been married to that RatBat with the tattered Wonder Woman costume for like five or six years and they had a whole litter of human/RatBat hybrids scampering around, and I couldn't even interest him in a little hanky-panky on the down-low and to tell you the truth, he'd gotten kind of flabby so I wasn't even that into him anymore. So there. (I did get an offer from a male RatBat in a tattered Vibe costume and while it was tempting, at that point I was just feeling worn out. Time bubble lag, you know.)

When I climbed back into the bubble, the homing button was still lit up. So as a lark, I dialed up my own era on the tele-screen, y'know, just to take a gander at it. (That channel's been gray and murky for a couple years now.) And sure enough, there was an image of the Legion, getting their asses handed to them by a hypnotist. (Haw! Good thing he didn't have a mime and a juggler with him or else they'd be totally screwed.)

I was glad to be able to go home, finally. But at the same time, I felt like I'd been jerked around. Finding out my era was destroyed was pretty devastating. I was finally making peace with the idea. And now suddenly with no explanation my continuity is valid again? What's up with that shit?

And it turned out there were scads of Legion continuities I could choose from. There was a future one where Mon-El was called "Valor" for no good goddamn reason and everybody was dressed either like an 18th century fop or like a janitor. And there was one where all the people had these weird, taut, vaguely English faces with teensy-tiny eyes and noses and mouths, and the costumes and hair styles were atrocious. Remind me never to visit that one.

So in the end I just went home to my regular continuity in 2966, to my "swingin' bachelor pad"... which I used to share with Weight Wizard. *sigh* I've lost the will to screw! I'm just staying inside, puttering about in my crotch-hugging orange pajama bottoms and my (unbelted) purple silk robe, drinking too much space wine and growing my hair and my muttonchops back out and trying to decide what to do next.

Sheriff Hawkins looks kinda familiar, somehow. Where'd he say he was from? 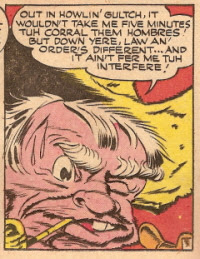 Holy--! I know this guy! From when I was vacationing in the DC Universe's "Old West." He was the sheriff but I'm the one who "deputized" him, if you know what I mean and I think you do. Kee-rist. He used to be hot. A little on the small side, but he had a real "Gary Sinise" thing going on. Damn. Now I feel old. Maybe the "Robotman" feature will cheer me up. 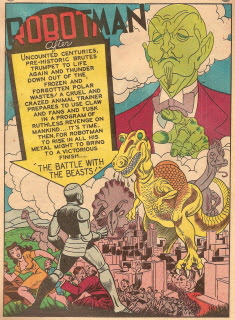 *whistles* That is one of the most downright beautiful splash pages I have ever freaking seen. Not only does it make me want to read the story, it makes me want to strip naked and rub myself all over the story, and cook a seven-course gourmet dinner for the story, and maybe nominate the story for President. A cyborg, a herd of dinosaurs, and a giant disembodied green guy? How could it go wrong? 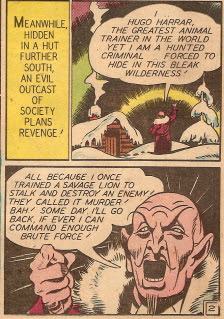 Um, villain guy? Nobody's there. Maybe you should write all this stuff down, and then you can tell your therapy group. Also, aren't you supposed to be green? I call "shenanigans."

Serendipitously, the animal trainer happens upon a freshly thawed herd of mammoths, mixed generously with other prehistoric mammals. Nobody communicated this to the artist, however, because he drew them as dinosaurs. So the human characters point at and gape over and flee from fancifully depicted T-Rexes and Tricerotops and such. Meanwhile, the captions and word balloons clearly refer to them as "mammoths" and "elephant ancestors" and -- my personal favorite -- "queer elephants" (a.k.a. "Log Cabin Republicans").

But it's hard to complain about a comic book story with panels like this: 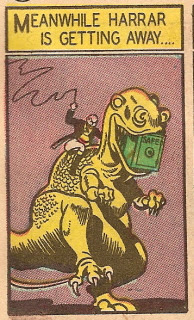 That, my friend, is the dictionary definition of "panache": riding atop a yellow tyrannosaurus with a safe in its maw. Wish I'd thought of it. Actually, there's a lot of dino-riding going on in this story. 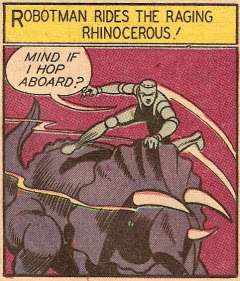 And finally, your obligatory out-of-context panel of gay subtext. (Because this is a blog, and that is what we do.) 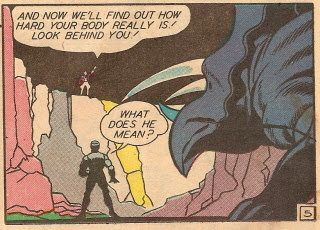 From behind.
Posted by Jeremy Rizza at 6:21 AM

And you didn't take a picture of the ratbat in the Vibe costume? I think I know of someone who be all over that photo.

"He used to be hot. A little on the small side, but he had a real "Gary Sinise" thing going on."

This is why you should always use your time bubble to travel forward through time and make sure that your romantic liaison will age gracefully _before_ you consummate a relationship. I'm not sure why it would matter, but I wouldn't want to get involved with a woman who I thought might turn out to be an old hag. It's just a purely emotional thing.

"I did get an offer from a male RatBat in a tattered Vibe costume and while it was tempting, at that point I was just feeling worn out."

Do you still have his number?

...riding a giant yellow jaunty T-Rex. While dressed as a ringleader to boot. Hoorah.

Jon: What are you, Scipio's RatBatPimp? Oh, I guess you are!

Scipio: Oops! Sorry. At any rate, the RatBats live in a primative agrarian society so they don't have phones. Maybe I could arrange for some hot epistolary action between the two of you. You'd be the new Abelard and Heloise!

Justin: I'll try to remember that.

Chawunky: Damn, he does look like Vincent Schiavelli! It's too bad he's dead, so he can't star in my entirely hypothetical Robotman motion picture.

You just don't see that many references to Abelard and Heloise on blogs. I salute your moxie!

Dang Blockade boy, the mammoth/dinosaur mix up is so funny, that I need to reference this in my blog; of course, credit will be given were credit is due.