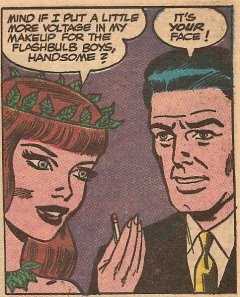 The man whose brow is all a-wrinkle is Bruce Wayne; the lady with the fifty-cent garland from Hobby Lobby on her head is, of course, Poison Ivy. This is her very first appearance (Batman #181, June 1966). Happy 40th birthday, Ivy! Although technically the comic was probably published in March 1966. Nevertheless, you still look positively ravishing. Must be that brow lift you got back in '02. Sure, at first you resembled a Romulan but I think it's settled quite nicely.

Could Bruce be any cattier about Ivy and her makeup? Yes. Yes, he could, and I'd like to help. I think you've got a good start with the passive-aggressive tone of your remark, but you need to follow it up with something bigger. Here are some ideas:

"And frankly, I'd applaud anything that will distract them from how limp and stringy your hair looks. Seriously, when was the last time you washed it? During the Eisenhower Administration?"

"Nice eyebrows, by the way. What did you use, a magic marker?"

"And you're asking your cigarette because... why?"

"You've got a mouth like a catfish and your eyes are way too far apart. Practically on either side of your head. I don't know if makeup is going to get the job done. Have you considered just wearing a ski mask all the time? Or maybe never leaving your house?"

Feel free to take any or all of these, Bruce. It's my free gift to you! Just for being so darned square-jawed and rugged.

Now let's look at Ivy's former rivals, who first and last appeared in this same comic. Unless you count their cameo appearance as a godawful "Riot Grrrrl" band in some retelling of Ivy's origin a few years back. Which I sure as hell don't. Presenting... the three most dangerous people in the entire world! They're not just random tarts in showgirl costumes. Honest. 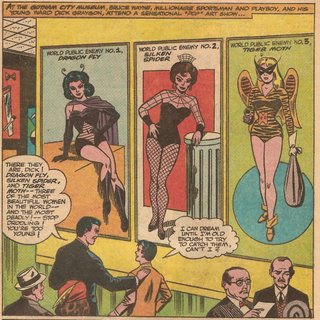 On the left we have Dragon Fly, with her innovative "crotch louver" bathing suit. Say goodbye to yeast infections forever with adjustable slats that give your cooter an air of Film Noir mystery!

In the center, we have Silken Spider, who is wearing the standard nurse's uniform for the Tommy Lee Memorial STD wing at Cedars-Sinai. It's also what the maids have to wear at Charlie Sheen's house. I don't know why she's posing with a garbage can. Probably full of busted sex toys and empty bottles of lubricant.

And on the right we have Tiger Moth, who has just returned from yet another daring faux-fur robbery. Now she has enough to make some capri pants! I wonder if anyone explained to her that moths don't have bird wings. Of course, former "Top Model" contestants have believed that all birds are blind and that elephants are related to dinosaurs, so anything's possible.

Meanwhile, in the lower right-hand corner, the Alfred clone just cannot believe the size of that lolly-pop.
Posted by Jeremy Rizza at 5:49 AM

I had no idea about the three villianous extras. Some DC writer should totally bring them back. They could turn out to have all moved to Manhattan years ago and end up in Nightwing's rogues' gallery.

Tiger Moth needs to be brought in as Killer Moth's sidekick. I'd even go so far as to make her the comic book version of Killer Moth's daughter Kitten from the Teen Titans cartoon. Because when Batman and Robin swoop in to stop Killer Moth from extraditing the Penguin from Blackgate, we need a blonde teenager in a tiger striped moth suit screaming, "Oh, Robbie-Poo!"

If anyone from DC is reading this, please make it happen!

"It's your face!" HA! That is the most Al Bundy thing I think Bruce Wayne has ever said in his life. For the first time in a long time, I am convinced that Batman is straight. He even has that painful trapped "God! Can we just GO!?" look on his face. Are you sure that's a cigarette? Because it might just be the home pregnancy test that would explain the entire panel.

Jon: I think you're right. It wouldn't take much to tweak these gals from a lame one-off concept into something with legs (pardon the pun).

Constantine: Batman as Al Bundy? HAW! Yeah, I don't know what ol' Sheldon Moldoff was going for with Bruce's expression, but I'm pretty sure it wasn't "soul-deadening misery."

In my little fantasy DC, the three extras are evolving. Now that Nightwing's in Manhattan, I see them all as Paris Hilton/Lizzie Grubman/Leopold & Loeb-style socialites, so fantastically rich that they have turned to crime as a diversion, and for the media attention.

Thanks to DragonFly, the Silken Spider, and Tiger Moth, my fantasy Nightwing is well on his way to becoming the Bronze Age Batman.

"a garbage can. Probably full of busted sex toys and empty bottles of lubricant."

DAMN! Is THAT who stole my garbage can?!?

PS: Technically, Al Bundy would have said something like "Voltage? Sure, Peg...how about seventy thousand volts more?"

And jon, your DC Universe is one i wanna read. Heck, live in.