Casual Fridays At 177A Bleecker Street

Lazy, rainy Fridays at the Sanctum Sanctorum of Doctor Strange... could it get any better? I imagine it would be like living in a Pier One. Cool foreign knick-knacks everywhere, the air permeated with a sublime, musky incense, and lite jazz blasting from hidden speakers. But unlike Pier One, you can stroll about in your bare feet and a cool robe and the salespeople won't scream at you or call the cops. Uptight bastards... but I seem to have gotten off track. Where were we? Oh yes.

Here's Clea, the Vili Fualaau to Doctor Strange's Mary Kay Letourneau, in a fetchingly convoluted penoir-and-genie-pants ensemble. It's very nearly see-through (the shameless hussy!) and features a stiff orange collar that would have done the Karate Kid proud. The very best part? The collar doubles as a dry-erase board. That way, when you're done doodling on it, you can jot down helpful messages. Like "Buy more incense" or "Exorcise cats." If it weren't for that way-out collar, Clea's "satanic milkmaid" up-do would overpower the gauzy frock -- but with the collar, the hair's practically a necessity.

And what would Hep Cat Supreme, Doctor Stephen Strange wear? Dig it! 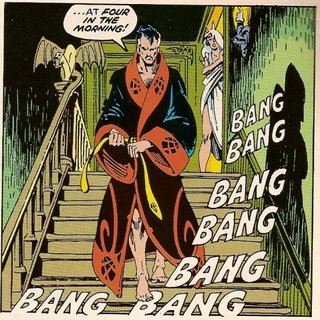 Suh-weet! I covet that robe. Profoundly. Knowing that such a glorious robe exists and that I don't have it makes me die a little inside. And you know me; I'm an expert at sneaking into places and taking whatever I want, er, need. (Like "my" time bubble. Haw!) But I'm sure Strange's crib is fortified to the rafters with spells that would turn me into a bunny rabbit (with bangin' highlights) or hurl my taut white ass into a shadowy limbo-realm if I so much as tapped on a huge round window. So I guess I'm just going to have to deal with it. Hey, let's look at the back of the robe...

Gah--! Hang it all, now I really want that robe! And you just know it's the most comfortable robe, like, ever. Probably micro-woven out of the silken moustache hairs of teenage satyrs and hand-dyed with the hypo-allergenic inks of Polynesian octopus-spirits. And yet it's machine washable. Because it's magic. Check out the bottom half of it. There's even a scary crimson bat-creature on it to guard against people yanking it up when you're not wearing any underpants. Which is the case here, I'm sure. Oh, I must have that robe! Unless... maybe the robe itself is guarded with spells. Like, if anybody else tries to wear it, it eats them or maybe it transforms into an abbreviated terrycloth number, rendering itself unfashionable. Yikes. I guess I'd better leave well enough alone. No doubt, the bathrobe of Doctor Strange is not intended for mere mortals.
Posted by Jeremy Rizza at 5:48 AM

Four in the morning?

When you're master of time, space and dimension, does 4 AM really matter?

Hey, if you were sleeping or having your "special time" with your extra-dimensional apprentice/boy-toy, it can matter.

Speaking of Clea, is it just me or does her appearance in that first panel scream "painfully specific evocation of the artist's fetishes" or is it just me? Look at that vapid china-doll face, the delicately pigeon-toed child-like gait, the pointless modesty. Eek.

But Strange's robe is slammin'! There aren't many picture windows that work as fashion motifs, but I think we've found an exception.

"I imagine it would be like living in a Pier One."

Jeremy, you're the only person on-line who makes me laugh out loud...

Jamawalk: Doctor Stephen Strange is a classic "Type A" personality and he fornicates only according to a strict schedule, planned months in advance. Thanks to this interruption, he can't get it on with Clea again until next Columbus Day, at precisely 3:23 PM.

Chawunky: It's not just you. Although I shudder to think what a guy like Michael Turner would have dressed her in. Probably just the orange collar with two narrow strips of gauze hanging exactly over the nipples. And her otherdimensional cooter would be helpfully obscured by a piece of pottery or something.

Scipio: Bless ya, pal, you really made my day with that comment! You're a prince!

Your reference to Karate Kid made me think of Ralph Macchio(sp?) at first. I must be slipping...


word verification=skikk. A Wolverine sfx if I ever saw one!

Two strips of gauze and an ornate collar?

Far too tame, my boy.

I know a red-blooded, beef-eating alternative universe where Robert Crumb was a DC staffer. In the 70's, he hooked up with Russ Meyers and they launched a Power Girl solo book that is... amazing.

I won't even get into what Spain Rodriguez did with Batman's sex life on this alternate. Heh.

*Here via some linky love from Neilalien*

I must confess to having coveted that robe waaay back when I first read that story.

I don't have the time to whip out my longboxes, but I believe it is from Marvel Fanfare # 5 (itself a continuation of a story from a backup tale in a Defenders issue. # 53 iirc)

But, stupid geek comic-memory aside...I LOVED that thing and always had a mind to have one made or make it myself.

I lost track of those plans along the years.

ThanX for making me seem "less" crazy, by your wanting one too.